The core of the Earth has its own native-grown, inaccessible wealth, though 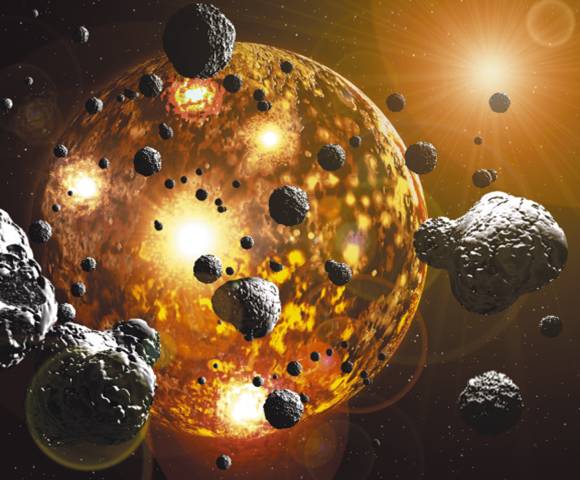 When our planet was still forming, collisions with other planetesimals — and a Mars-sized object that sheared away the moon — turned the embryonic Earth into a roiling ball of molten rock. Iron and other heavy elements sank toward the core, and other iron-loving elements did, too. As a result, there’s plenty of gold at our planet’s center. So why, then, is there also gold in the hills? A new study supports the theory that it was all a gift from above.

Meteorites seeded the Earth with a fresh, crust-level supply of noble metals half a billion years after the planet coalesced, British scientists say. And given how the Earth’s crust has been mixed since then, the researchers speculate that meteorites may have even given us plate tectonics.

The Late Heavy Bombardment was a cataclysmic era between 3.8 and 4.1 billion years ago in which waves of meteorites rained billions of tons of material onto the Earth, moon and the other terrestrial planets. These meteorites brought gold, tungsten and other precious elements, explain Matthias Willbold and Tim Elliott of the University of Bristol.

To test this theory, the team studied 3.8 billion-year-old rocks from Isua, Greenland, some of the oldest rocks on the planet. The rocks formed after the bombardment era, but they contain isotopic information that can tell scientists about earlier Earth conditions. Willbold and Elliott zeroed in on an isotope of tungsten, 182W, of which there’s an elevated ratio in the Earth’s mantle. This is because the tungsten isotope is a daughter product of another radioactive element present amid crustal silicates. Which is to say, an added veneer of metals from meteorites would have a relatively lower ratio.

Using incredibly precise analysis — this tungsten ratio is measured in units of parts-per-10,000 — the researchers were able to tell that Greenland rocks do have a higher tungsten-182 ratio than modern-day rocks. The small difference is in agreement with how a bombardment would have added material to the Earth’s crust. This bombardment explains the otherwise surprisingly high abundance of precious metals in the crust, the researchers say.

“Our work shows that most of the precious metals on which our economies and many key industrial processes are based have been added to our planet by lucky coincidence,” Willbold said in a statement.

There’s one other cool aspect of this study. Willbold and Elliott discussed that the ratio in modern rocks means plate tectonics must have stirred in the new, meteorite-delivered rocks relatively quickly. Thus the Late Heavy Bombardment, in addition to giving us precious metals, may have initiated mantle dynamics that still exist, they write.

The paper appears in this week’s issue of Nature.