The Mars Reconnaissance Orbiter has returned data suggesting that it snows on Mars just like it snows on Earth, with one key difference: On Mars, it snows dry ice. 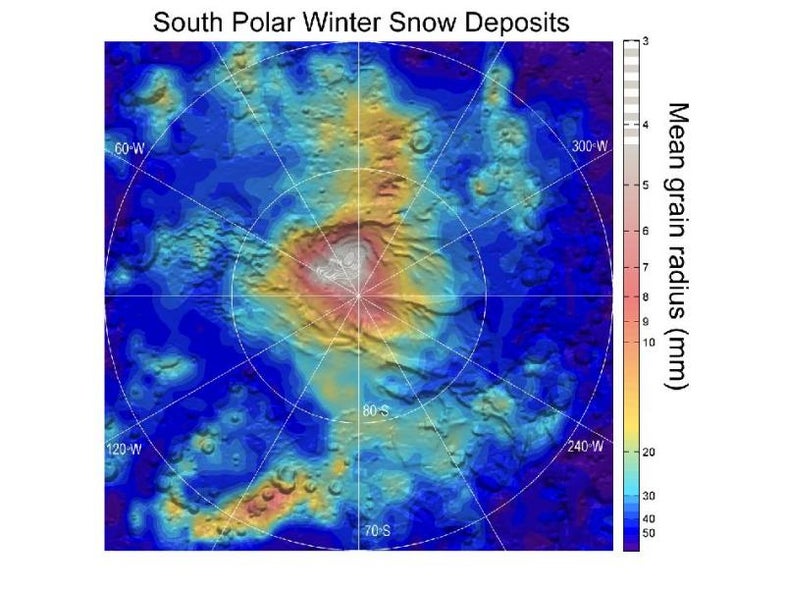 Curiosity may be roving the Martian frontier to find out just how similar the Red Planet is to Earth, but meanwhile NASA’s other Martian explorers are turning up evidence of just how different our neighboring planet can be. The Mars Reconnaissance Orbiter has returned data suggesting that it snows on Mars just like it snows on Earth, with one key difference: On Mars, it snows dry ice.

Dry ice, which is frozen carbon dioxide rather than solidified water, requires temperatures dipping far below those experienced beneath Earth’s atmosphere–roughly 193 degrees below zero Fahrenheit, to be slightly more precise. Researchers had already firmly established that clouds of carbon dioxide exist in Mars’ southern polar region, and they had previously found carbon-dioxide ice in the polar caps at the Martian south pole. What they lacked was the mechanism by which this carbon dioxide moves between cloud and ice cap–via precipitation or simply freezing out at ground level, like frost. And that’s what they’ve now found, thanks to the MRO.

These observations have essentially confirmed three things. One, that carbon dioxide ice particles observed in these polar clouds are large enough to fall to the surface. Second, that these “flakes” of carbon dioxide ice could develop and fall to the ground during the lifespan of the clouds. And most importantly, the MRO has provided strong evidence that they do exactly that. By pointing the orbiter’s instruments at the horizon from an angle rather than straight down at the ground from above, they were able to observe the presence of these ice particles extending from the clouds to the surface.

In other words, they’re pretty sure they saw it snowing dry ice at the Martian south pole. This is the only place on mars where frozen dry ice exists at the surface year round, and this snow very well could be what’s sustaining that permanent ice cap. And just like that, we now know something we didn’t know before about Mars.