Today on Mars: Curiosity Is All Set to Sift Sand and Bake Rocks

NASA is almost done with a month-long set of tests designed to make sure every part of the rover is working. 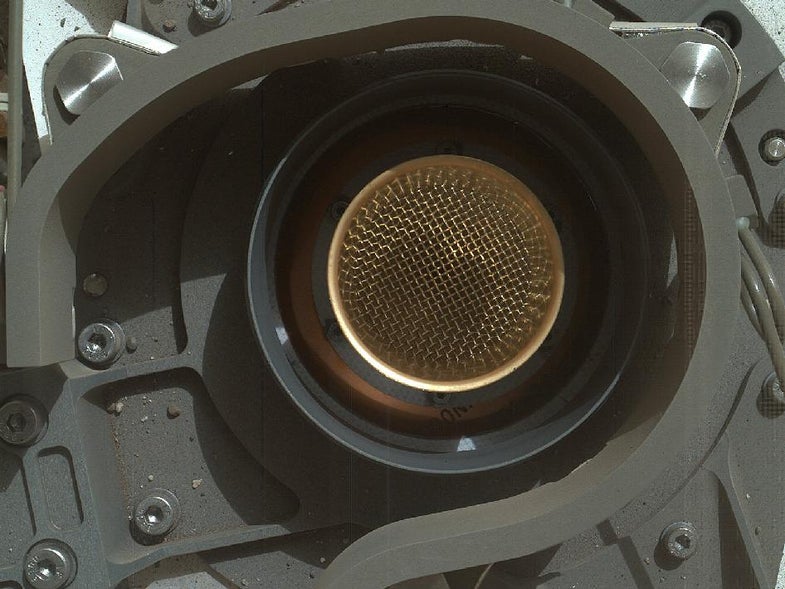 A battery of tests checking out the Mars rover Curiosity should wrap up today, and she’s passing them all with flying colors. Very soon, the rover will start doing what it was sent to Mars to do: Swallowing some soil, baking it and X-raying it, with the goal of finding out whether life could ever have survived on the planet.

This image shows the entrance to the CheMin instrument (for Chemistry and Mineralogy), which will sift Martian dirt so it can be X-rayed. CheMin will identify minerals by examining the diffraction patterns of X-rays that pass through the spaces between atoms.

Curiosity will roll again by this weekend, driving until scientists see a rock they want the rover to touch, Curiosity mission manager Jennifer Trosper said in a news conference Wednesday.

NASA is using images like these to check out Curiosity’s instruments, part of a series of tests to make sure everything works as expected — or if not, how it works differently than expected. During the tests, the rover’s arm team also gained some confidence maneuvering the arm under Mars’ freezing temperatures and lower-than-Earth gravity.

This particular picture is a composite of eight separate pictures from the Mars Hand Lens Imager, or MAHLI, which were merged on the instrument before being beamed back to Earth. This is the first time MAHLI performed that combo technique since arriving at Bradbury Landing — usually, engineers at the Jet Propulsion Laboratory have to stich images together.

You can also see some pebbles and sand — those were deposited on the rover deck during the sky crane landing.

Stay tuned for the next drive!