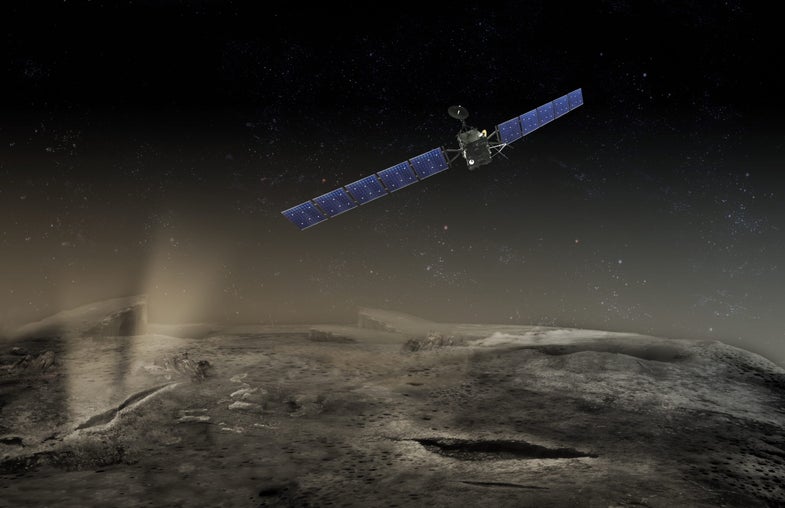 Philae phoned home last weekend, but the connection wasn’t very good. The lander, which was lost in a bungled landing attempt in November, woke up from a long hibernation on Saturday. It “spoke” with the Rosetta orbiter for about a minute-and-a-half over the weekend, but has gone radio silent again.

The Rosetta mission‘s orbiter relays communications between the lander on the surface of Comet 67P/Churyumov–Gerasimenko, and Earth, the home planet of humanity, which is about 317 million miles away from the comet. So to try to get a better communications link with Philae, Rosetta scientists today moved the orbiter into a lower orbit around the comet.

Rosetta was orbiting at a height of about 140 miles when it received the call from Philae. Now, by circling the same area at a height of about 110 miles, scientists are hoping the lander will be able to contact the orbiter. There’s a small chance that could happen tonight, Rosetta scientist Stephan Ulamec told Popular Science, but chances are better that it will happen on Thursday or Friday.

Moving closer to the comet is dangerous. The comet is nearing its perihelion—the point in its egg-shaped orbit when it’s nearest the Sun. During that approach, dust and ice will slough off of the comet, giving the lander and the orbiter lots of delicious information about what the comet is made of and where it comes from. However, those clouds of dust and ice could disorient the orbiter, which navigates using its cameras. At a press briefing, scientists compared the current situation to driving a car through a snowstorm.

If the orbiter manages to re-establish a link with the lander, without getting taken out itself, Ulamec is hopeful that the lander will be able to get back to work.

“The lander is really healthy,” he says. “All systems are doing well. From the lander’s point of view, everything is better than we ever dreamed of.”

If it gets back online, one of the lander’s first tasks will be to take photos so scientists can figure out where it is, whether or not it’s tipped over, and whether its radio antenna is obstructed. Then it will collect other basic data, such a temperature, magnetic field, and electrical measurements, says Ulamec. If all goes well, it’s “not unrealistic” to contemplate having the lander drill into the soil and become the first spacecraft to taste a comet.