The beautiful creatures are dying at an alarming rate. 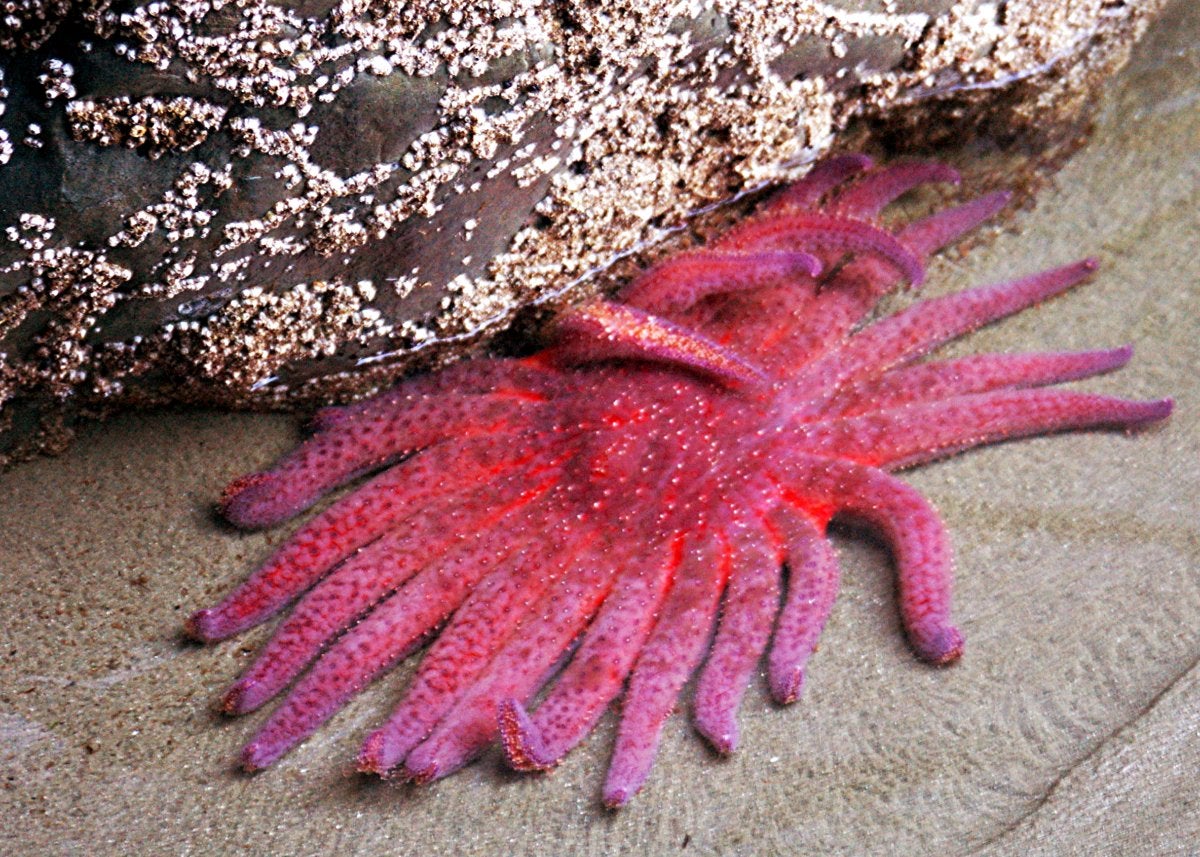 More than 20 species of sea stars—including the sunflower star, a keystone predator with a wide range—have been ravaged by a poorly-understood ailment known as sea star wasting disease. Wikimedia Commons
SHARE

If you remember your high school biology lessons, you might recall that starfish aren’t really fish at all. Properly called sea stars, these spiny-skinned predators are an important part of ecosystems up and down North America’s west coast. In less than a decade, however, more than 20 species of sea stars—including the sunflower star, a keystone predator with a wide range—have been ravaged by a poorly-understood ailment known as sea star wasting disease.

Although the illness isn’t new, the epidemic that began in 2013 has had unprecedented impacts on the stars. At the beginning, big, brightly-colored sunflower sea stars were about as common and observable in the coastal waters as robins are in the trees, says Drew Harvell, a Cornell University biologist who studies disease in the changing ocean. “We don’t really know much about the pathogen,” she says—how it spreads from star to star isn’t even known. But its effects are undeniable.

If you ever visited the coast and walked the beach, you would recognize their brightly-colored bodies—that is, until recently. These once-abundant sea stars are now almost gone. In large parts of their former range, they’re considered extirpated, a fancy term for completely wiped out. The population drop has been between 80 and 100 percent, as revealed in a new study by Harvell and collaborators that focuses on the loss of the sunflower stars.

The study also links warming waters with the spread and deadliness of the illness that killed them. The researchers used data from NOAA deep water trawls and nearshore surveys by citizen scientist divers to quantify current sunflower star populations in Washington, Oregon, and California as well as in northern British Columbia, Canada, finding those insane declines of between 80 and 100 percent.

They also compared this information with sea temperature data collected by NOAA, finding that the biggest declines in sea star population occurred during periods of unusually warm sea surface temperatures.

“It’s a correlation, but it’s a sweeping correlation that goes up and down the coast,” says Gretchen Hofmann, a biologist at the University of California, Santa Barbara who was not involved in the study. When she saw Harvell’s data, Hofmann says she was “incredibly surprised” by how dramatic the drop off in sunflower star population really was.

But it makes sense, she says, if you think about it in terms of stress. Imagine you’re a sunflower star. You get the flu (for example.) Then suddenly there’s a heat wave, so you’re sick and overheated. Your body gets extra stressed because it needs to fight the flu, but it also needs to fight the heat.

You might imagine that sunflower stars in deeper waters, where temperatures are cooler, might have better survival rates. They’re your neighbor who has A/C, in this metaphor. But the deep-sea trawling data that Harvell’s team looked at shows that the deepwater stars also suffered massive declines.

“The rapid, widespread decline of this pivotal subtidal predator threatens its persistence and may have large ecosystem-level consequences,” the study reads. For example, the star is an important sea urchin predator. Without sunflower stars to keep them in check, sea urchins devour the kelp forests that are home to numerous important coastal species. Impacts like these can destabilize and reshape coastal ecosystems in disruptive ways that change the lives of animals, affect the Earth’s biodiversity and also impact human uses of the ocean, like coastal fisheries.

In a broader frame, this study provides more evidence that oceanic warming, as well as warming on land, correlate with the spread of disease. Since the world is getting warmer, whether we like it or not, it points to a need for better understanding of how animals respond to disease. Because the effects of climate change aren’t easy to predict, Hofmann says, and they move fast: “We wouldn’t have seen this coming 10 years ago.”