The midwest is in the midst of record-breaking, deadly floods

It's the perfect storm. 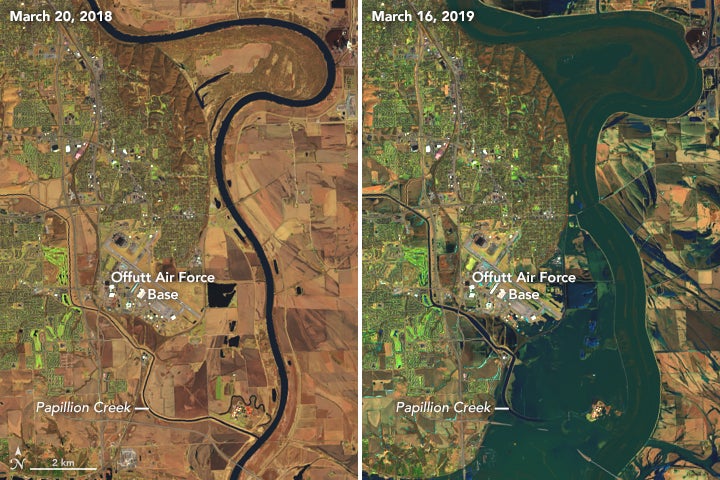 Historic flooding in the Central Plains, set off by last week’s “bomb cyclone,” devastated cities from Minnesota to Missouri this weekend, and will continue to inundate areas throughout the week. As of Monday, 41 river locations, mostly in the Missouri River Valley, have set all-time records for water levels, according to Jonathan Erdman, a meteorologist for the Weather Company. Cities in eastern Nebraska, western Iowa, and southeastern South Dakota are among the hardest hit, with homes and roads wrecked and at least three deaths.

While the heavy rains from the last week’s winter storm were a “tipping point” for the floods, says Erdman, a number of factors led to the extreme event.

Cold, snow, and then a rapid warming

The Midwest has faced several cold snaps this winter. Thanks to this year’s polar vortex disruption, gusts of Arctic air have chilled the region and brought some of the lowest temperatures in decades. Even early in March, Nebraska was having subzero lows, well below normal for that time of year. Snowfall continued through early March, too, bringing in an extra six to eight inches to the area.

These cold temperatures froze stretches of rivers and the top layer of waterlogged soils. “The ground couldn’t absorb any water,” says Erdman. “It was almost like concrete.”

Then, temperatures jumped after the March cold snap, pushing into the 50s and starting to melt the snow on the ground. River ice started cracking and breaking into chunks, and then piling up against bridges and bends on waterways, forming what’s called “ice jams.”

But “the real kicker is when the bomb cyclone dumped one to three inches of rain over this part of Nebraska and western Iowa,” says Erdman. This powerful winter storm formed after a swift drop in pressure in the area, triggering warm air and heavy rains.

Water from the rains flowed over the frozen ground as if it were pavement, streaming into the waterways in the Missouri River Valley. River levels broke all-time records—some dating back to the late 1800s—mostly in Nebraska and Iowa, with additional records shattered in South Dakota, Minnesota, Wisconsin, and Illinois.

Then that water hit the ice jams, where it pooled up and then started breaching and breaking dams and levees. Water and ice slabs rushed outward and into streets, farms, and homes. “I’ve been following national weather for about 22 years now,” says Erdman. “And this is about the most extreme ice jam event I’ve seen anywhere in the U.S.”

Officials issued mandatory evacuations in cities in Iowa and Nebraska as flows swept in. At least three people have died from the floods, one man after attempting to use his tractor to save another person stranded in their car. A third of Offutt Air Force Base near Omaha is underwater and 30 buildings are damaged, despite a continuous 30-hour effort to protect it with sandbags between Friday and Saturday, according to the Omaha World-Herald. Even the National Weather Service office in Omaha needed to evacuate, according to Erdman.

In addition to water, ice slabs coursed through communities, too. After the Spencer Dam on the Niobrara River, a tributary of the Missouri River, failed, massive blocks of ice crashed into a gas station and other structures in Niobrara, Nebraska. Piles of ice as high as eight feet continue to litter farmers’ fields and roads, says Erdman.

It seems the tributaries in the Missouri River Valley have either all crested or will soon, and floods will start to dissipate over the week. “But the Missouri River, especially south of Omaha, will stay quite high at least for the next several days,” says Erdman. In those areas, record floods might continue through Wednesday.

Much of the soils across the states are currently soaked, thanks to what the National Oceanic and Atmospheric Administration has declared the wettest winter on record dating back to 1895. Many areas have significant snowpack, too. Fargo, North Dakota has some 20 inches of snow on the ground right now, says Erdman.

This means there’s potential for more flooding. It depends on how quickly temperatures warm as we head into spring and if there’s more storms ahead, which would bring more water to already-saturated areas. “I’m a little concerned to see what might happen up in the Red River Valley in North Dakota and Minnesota, but there’s a lot of wild cards ahead,” says Erdman.