This ancient stegosaurus-platypus mashup has everything 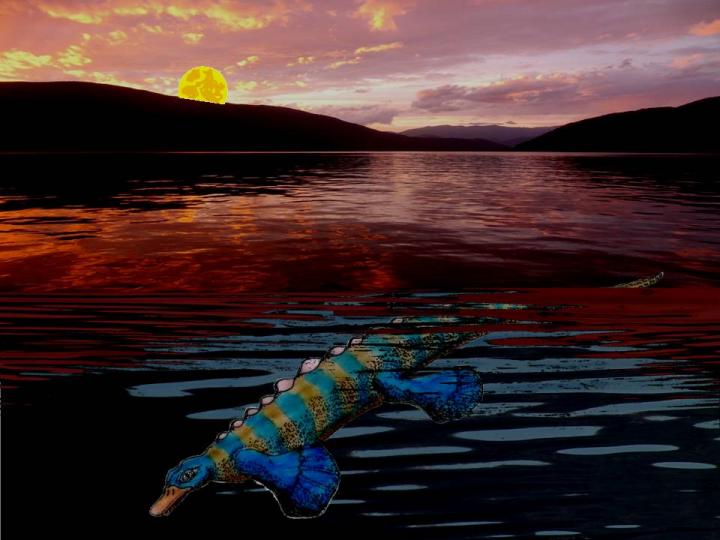 The platypus-esque Triassic reptile swam in shallow seas located in what would be central China today. Gianluca Danini
SHARE

A Frankensteinian mashup of a platypus, a stegosaurus, and a marine reptile might seem like something born from a game of MadLibs, but new fossil discoveries have revealed just that. Scientists think the creature, known as Eretmorhipis carrolldongi, was an Early Triassic reptile that swam around with a beak very similar to that of the duck-billed platypus, and had jagged, bony plates down its back à la the stegosaurus. The finding could shake up what we know about evolution after the end-Permian mass extinction event, which happened just before this swimming stego-platypus was around.

While incomplete carrolldongi fossils have been unearthed in the past, two newly analyzed ones from what is today the Hubei province in central China finally revealed a key part of the animal’s morphology: its head. When the research team, which published its study Thursday in the journal Scientific Reports, cleaned up the pair of fossils and sat down to give them a look, they were shocked.

“Immediately we noticed the head was really strange,” says Ryosuke Motani, a study author and paleobiologist at the University of California Davis. The head had two bones extending from the snout with a gap in between. It was unlike any ancient reptile they’d seen before, and instead reminded them of the bone structure of a certain living mammal. “It looked like a duck-billed platypus with that hole in the middle of the snout.”

In theory, that “hole” in the center would have been occupied by a cartilaginous, platypus-like bill. Cartilage breaks down pretty quickly and rarely shows up in the fossil record, so you wouldn’t expect to see it in fossils like these. But the fossilized bone structure was so similar to that of a platypus that the researchers found it totally plausible that this ancient creature had a bill, too. They speculate that it might have even had a similar function. Just as the platypus uses its bill to root around in muddy streams for a meal, carrolldongi could have procured food the same way in its underwater Triassic habitat. The ancient reptile clocked in at just over two feet long and probably ate things like shrimp, worms, and other invertebrates.

“The morphology of the skull is really odd, and the suggestion that Eretmorphipus had a platypus-like beak seems reasonable,” says Judy Massare, a paleontologist specializing in marine reptiles at the State University of New York College at Brockport who wasn’t involved with the new study.

In addition to a bill, the researchers found that the creature also had really tiny eyeballs. That strengthens the idea that the bill could have been advantageous for hunting—with poor eyesight, carrolldongi may have hunted by touch instead. Animals of similar eye-to-body size ratio, like the northern short-tailed shrew, the African elephant, and, indeed, the platypus, all use sight-alternative hunting methods (echolocation, hearing, and electroreception, respectively).

And if the bill wasn’t mystery enough, there’s still the question of those bony plates running down carrolldongi‘s spine. “It’s such a strange mixture of traits,” Motani says. He’s still working out why the reptile had the plates in the first place. “With these blades sticking out of its back it’s like an old sea serpent drawing, you’d see them sticking out of the water from afar.” What’s more, Motani says it was probably a terribly clumsy swimmer. Its rigid body would have made it clunky and inflexible instead of agile and sprightly. Luckily for carrolldongi, Motani says, there probably weren’t a lot of hungry predators lurking around—it evolved in a world annihilated by the mass extinction event at the end of the Permian era roughly 252 million years ago.

Discoveries like this one challenge what scientists have traditionally thought about evolution directly after that severe extinction event. Evolution in the following era may not have been slow and straightforward like they thought, but comparatively quick and able to create a diverse range of creatures right off the bat. Hupehsuchus, for example, was another Early Triassic marine reptile that hunted with the help of a large elastic pouch like a pelican. We can only hope that Motani and his colleagues will unearth some more MadLibs creatures like carrolldongi in the future.

“The Triassic is one of the most interesting intervals in the history of amniote (reptiles, birds and mammals) evolution,” Benjamin Kear, a vertebrate paleontologist at Uppsala University in Sweden who wasn’t involved in the new discovery, said in an email. “The new fossil marine reptile described here adds another piece to this growing evolutionary puzzle.”