The monarch butterfly is scientifically endangered. So why isn’t it legally protected yet?

The migratory monarch butterfly was flagged as endangered on the IUCN Red List, but federal protection in the US is still up in the air. 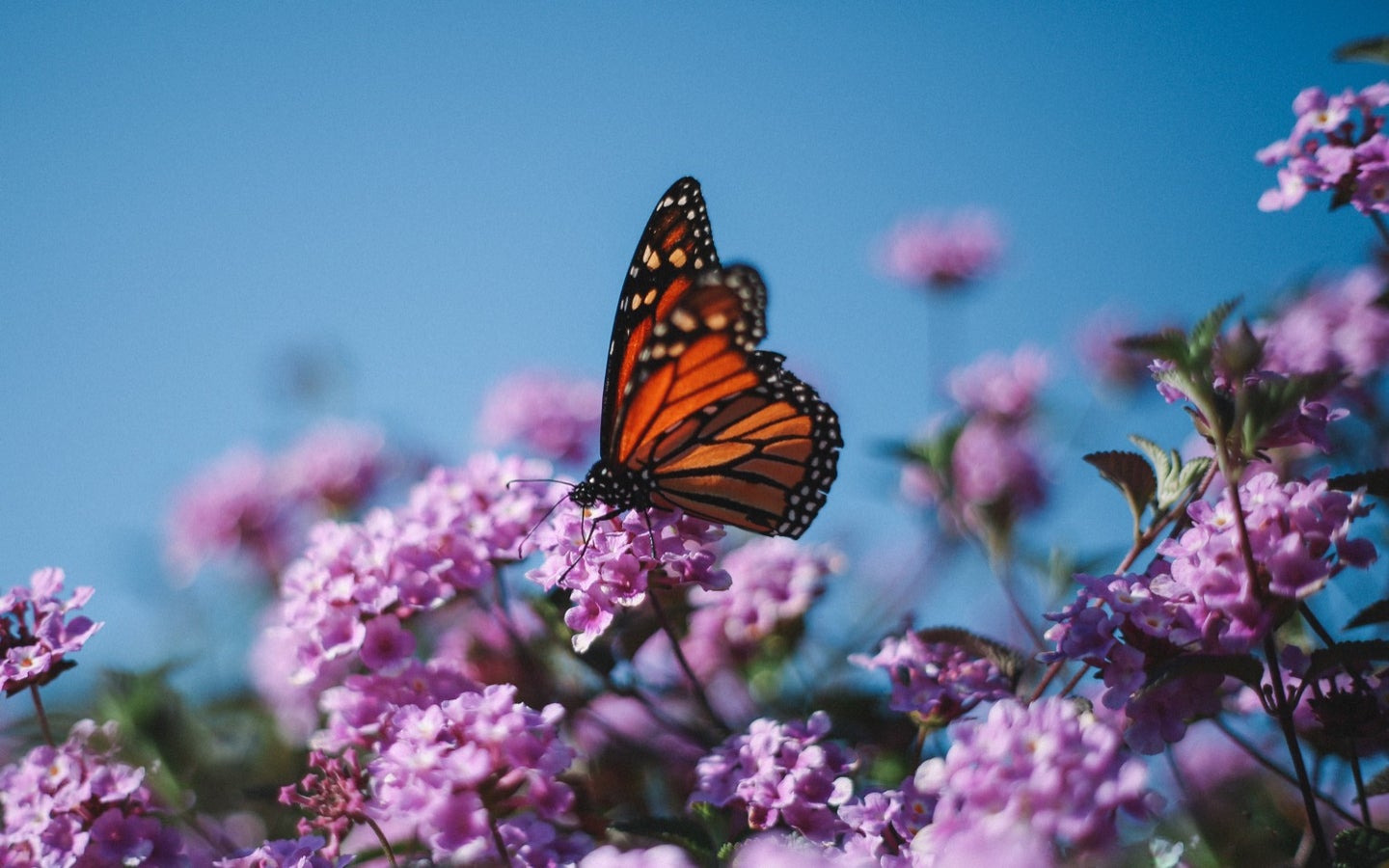 Both migratory monarch butterfly populations east and west of the Rockies are at risk—but legal protections to conserve the iconic insect are patchy. Justin DoCanto/Unsplash
SHARE

The iconic migratory monarch butterfly has had a rough past couple decades. While its numbers can vary year to year, populations east and west of the Rockies have seen an overall long-term decline—to the point where conservation biologists and butterfly lovers are concerned for its survival as a species. Yet despite its dwindling health, the monarch has not been placed under federal protections in the US.

A global leading authority on endangered species conservation disagrees, however. After conducting a two-year assessment, last month the International Union for Conservation of Nature (IUCN) designated the monarch butterfly as endangered on the organization’s Red List of Threatened Species.

“This is an assessment by an international scientific body that looked at all of the data and said monarchs are endangered,” says Karen Oberhauser, an expert on monarch butterfly biology and conservation and the director of the University of Wisconsin-Madison Arboretum. “That means they’re in danger of their population going so low that it wouldn’t be able to recover.”

In other words, monarch butterflies could be at risk of extinction. The destruction of precious milkweed habitat as well as climate change are the primary threats to their survival, researchers report, with the IUCN stating that numbers have sunk between 22 to 72 percent over the last decade. The boldly striped insect lays its eggs and feeds on milkweed in breeding grounds in Canada and the US. After journeying up to 3,000 miles, the Western monarch subspecies overwinters on the California coast, while the Eastern one migrates down to Mexico. The “bellwether” for monarch populations, Oberhauser says, is how many butterflies make it to the overwintering grounds each year.

[Related: A parasite could be killing millions of monarch butterflies as they migrate]

Oberhauser and the IUCN scientists hope that the designation will prompt the public, and even policy makers, to see the urgency of the state of monarchs. However, moving a species onto the IUCN Red List does not initiate federal protective measurements. “This is purely a scientific designation,” says Oberhauser, who helped draft the IUCN assessment. “It doesn’t have any legal requirements.”

The unique migratory lifestyle of monarchs presents a tricky conservation conundrum. Canada, Mexico, and the US each have separate wildlife agencies and processes that determine whether a species should be federally protected. While certain areas and states like California have monarch-specific legislation, protection is “piecemeal” and imperfect, says Oberhauser. Mexico does federally protect the butterflies and the bioreserve where they overwinter. In Canada, the Committee on the Status of Endangered Wildlife has deemed the species endangered, but still does not protect it under the Species at Risk Act. Similarly, the US Fish and Wildlife Service (USFWS), which establishes recovery efforts and reviews candidate plants and animals under the Endangered Species Act, has not listed the monarch as endangered.

While the IUCN Red List is scientifically reviewed, it is separate from threatened and endangered species lists regulated by individual countries. This might cause some confusion among the public, says Delbert André Green II, who studies the genetics and evolution of migrating monarchs at the University of Michigan.

Currently, more than 1,300 species are listed as endangered or threatened in the US, compared to the more than 147,500 species on the IUCN Red List. The USFWS has been made aware of the IUCN’s decision, an agency spokesperson told Popular Science in an email, further stating that “this action does not constitute a US Fish and Wildlife Service Endangered Species Act (ESA) listing decision.”

That decision was on the table just a few years ago. After the species’ southern migration in 2013, the World Wildlife Fund-Mexico (WWF-Mexico) reported that overwintering sites in Mexico saw Eastern monarch butterflies squeezed down to an alarming 2.94 acres of forest area—a 59 percent decrease from the previous season and the lowest area covered in 20 years. “Alarm bells went off in that year,” says Green. “It was dramatically low, below what was predicted.” The public submitted petitions to the USFWS, prompting agency biologists to kick off a six-year assessment to determine if monarchs should be listed.

In December 2020, federal officials determined that the monarch was “warranted but precluded” by other higher priority species that faced greater risk, and placed it on the backburner as a candidate for endangered species listing. “They said they are threatened, but there are so many species worse off than monarchs,” says Oberhauser. “I think the initial thought was that it seemed like a prudent decision, although there were some groups who could have wanted the full-on designation as threatened.”

In the US, the Endangered Species Act is one of the strongest measures for not only recovering at-risk animals and plants, but creating protective actions to preserve the environment, says Oberhauser. “Once a species is listed, it means that its habitat has to be protected,” she says. “In my opinion, the act is one of the most important pieces of environmental legislation.”

[Related: To save monarch butterflies, we need more milkweed]

As a candidate species, USFWS biologists will monitor the status of migratory monarchs annually. The agency’s spokesperson states that USFWS “intends to propose listing the monarch in fiscal year 2024,” if legal protection is still warranted at the time of reassessment. While the IUCN Red List might not have any legal clout, Green thinks that it could still have an impact on the US government’s next steps.

Official protections, however, could make it illegal to remove or interfere with monarchs or their habitat in the wild, explains Green. This, he adds, has the potential to ripple out to grassroots education and restoration programs, which have played a big role in monarch conservation efforts. Special permit applications might be needed for research groups and the public to physically interact with monarchs. Green cautions that it could have a “complete chilling effect” on some current campaigns.

“The additional exposure for monarchs [from the IUCN Red List] is great, but we want to make sure that we don’t inadvertently lose them as this important model for promoting conservation,” he says. “It’s certainly going to be a balance that we’ll have to strike.”

While it’s unclear exactly how the US government will find this balance, countries that already protect the species can provide a picture. “In Mexico, nobody can take monarchs for anything without special permission from the federal government,” says Eduardo Rendón-Salinas, a monarch expert with WWF-Mexico who leads surveys on overwintering grounds. “We are very concerned here in Mexico on all levels about the monarch migration and the monarch overwintering. It’s a really, really special topic that we must protect here.”

It’s also crucial to learn how climate, habitat availability, and other environmental factors come together to affect the stability of monarch butterfly populations, which do see year-to-year fluctuation. Green says that determining the exact causes for sporadic swings is tricky. “There have been some surprises that we’ve seen in the past few years. For instance, there was a bounce back of the California population recently,” he says. While the bump in the Western subspecies doesn’t nearly bring numbers close to historic counts, it’s still notable and unexpected. Similarly, this past overwintering season in Mexico also saw a 35 percent increase of Eastern monarchs, according to the most recent survey led by WWF-Mexico—a sign that the population is recovering. However, experts remain cautious, given that numbers are still trending downward.

“Especially in the past five years or so, we’ve been trying to understand much more deeply what exactly is contributing to these trends,” Green says.

Since the 1990s, loss of milkweed from agricultural herbicides and deforestation in overwintering habitats have been the main contributors to monarch population decline, says Oberhauser. (Rendón-Salinas points out that there have been improvements in canopy cover following the Mexican government’s actions to crack down on illegal logging and protect monarchs.) In recent years, however, climate change has added another pressure on both populations. In a 2021 study published in the journal Nature Ecology and Evolution, Oberhauser, Rendón-Salinas, and a team of scientists in the US and Mexico reported that between 2004 and 2018, breeding season weather in the US was nearly seven times more important than other factors in determining the numbers of overwintering monarchs.

The same can be true on both ends of the migration. A single snowstorm in the overwintering grounds in Mexico, for instance, can wipe out 70 to 80 percent of Eastern populations in a season, while hot and dry conditions during the spring and summer in the southern and northeastern US can also spell bad news. Rendón-Salinas says similar trends have been seen in both monarch butterfly subspecies in the East and West.

“This new IUCN category of the migratory monarch in North America is an opportunity to reinforce our efforts in the conservation of the species,” he notes. “To do that, we need support from the governments, from the NGOs, from the private institutions—but the most important thing is that we need help from all kinds of people involved in Canada, the United States, and Mexico.”

Oberhauser, Rendón-Salinas, and Green all note that the public can play a big role in the future of monarch butterflies: planting flowering plants, growing milkweed, and participating in monarch monitoring. USFWS for its part agrees. “Monarch populations benefit from widespread, ongoing conservation measures that are helping reduce threats,” the agency’s representative said in a statement. “We strongly encourage continued efforts to improve the status of monarchs.”