Monarch butterflies show hints of a comeback out West, but experts are cautious

People's efforts to plant milkweed and other native habitats are aiding the species' survival. 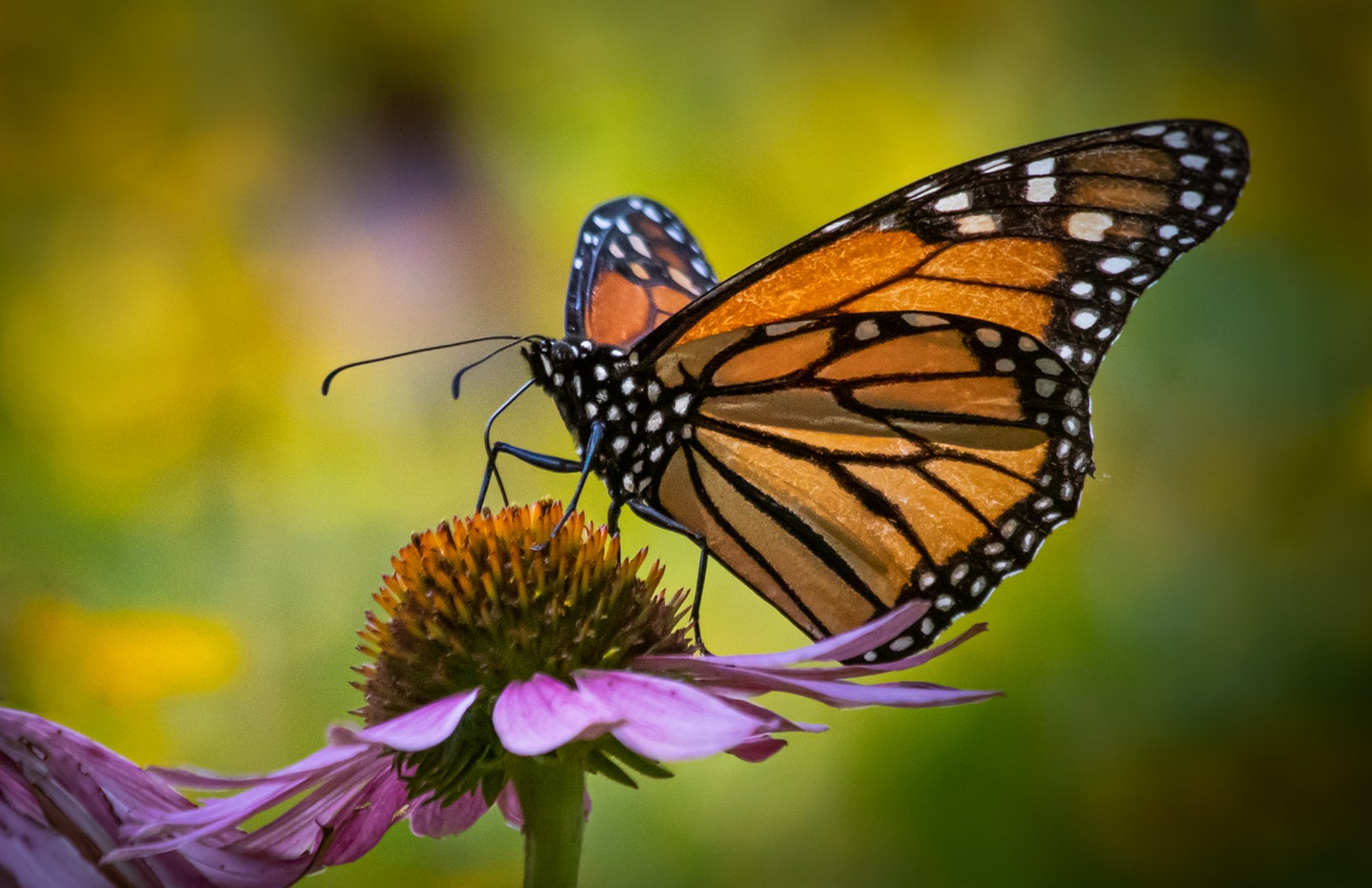 Meadows that contain a mix of native wildflowers could be more helpful to Eastern and Western monarch butterfly populations than haphazard patches of milkweed. Deposit Photos
SHARE

In November of 2020, a volunteer-run monarch butterfly count across California spotted less than 2,000 of the insects. It was the third consecutive winter they’d tallied less than 30,000 individuals—a worrying trend. But the same count this past Thanksgiving brought a glimmer of hope: Volunteers found 247,237 butterflies over 283 sites, a remarkable turnaround in just a year’s time.

“This year we saw surprising results, and they’re really exciting, ” says Isis Howard, an endangered species conservation biologist with the Xerces Society, which helps to lead the count. “Everyone is feeling hopeful, but what we’re trying to convey is cautious optimism.”

But as these orange, black, and white patterned butterflies show hints of recovery out West, entomologists raise questions about the ever-worsening fate of the species’ Eastern counterparts.

Since 1997, Western monarchs have declined by more than 95 percent. At one point, the U.S. Fish and Wildlife Service considered placing both populations on the endangered species list, but decided to hold back after concluding that the monarch’s condition was “warranted but precluded by higher priority listings.”

While Howard says it’s incredible to see the Western population’s resilience in action with the uptick in numbers this year, there are still a lot of unknown factors at play. “We don’t know what next year will look like. We don’t know what five years from now will look like,” she says, “Is it possible that monarchs could go back down to less than 2,000? Yes, it’s possible. Could they jump up next year to over 300,000? Yes, it’s possible too.”

Howard suspects that extreme environmental conditions such as storm events and fires in California might have influenced the dramatic year-to-year shifts in Western monarchs. There is even some consideration that there could be an influx of Eastern monarchs that traveled down to Mexico and then joined the Western flight.

Traditionally, the Rocky Mountains form a natural barrier between the Eastern and Western monarch populations. The Eastern monarchs are famous for their unique migration spanning more than 2,500 miles to their winter sites in the central Mexican states of Mexico and Michoacán, and back to their summer sites all up the US Eastern Seaboard and into the southern regions of Ontario, Canada. The Western monarchs, on the other hand, take a much shorter route from Mexico along the Pacific coast to California (the exact waypoints still remain a mystery).

In North America, the Eastern monarch accounts for nearly 99 percent of all monarchs. Research published in 2016 showed that as it’s population declines, the Eastern monarch has a significant chance of reaching quasi-extinction over the next 20 years. One of the main culprits behind this decline is habitat loss across the continent. One estimate suggests that the 5.2 acres of land monarchs currently use in Mexico would need to increase to 14.8 acres to pull the species out of danger.

[Related: To save monarch butterflies, we need more milkweed]

Skye Bruce, a PhD student at University of Wisconsin-Madison, focuses on monarch landscape ecology, which is essentially the study of the best possible ways to conserve the species’ habitats. In her work she seeks to answer questions such as: Do monarchs need lots of habitat in the landscape in order to find a patch? Do they need continuous, non-isolated habitat like a lot of butterflies and other insects do? Or can they find these isolated patches?

The loss of milkweed in monarch habitats is the biggest threat to their numbers. Bruce pins this to an increase in industrial agriculture across the US, which has resulted in monocultures of corn and soy. “The introduction of glyphosate has taken milkweed out from the landscape,” Bruce says. “So we’ve lost millions of milkweed stems from the edges of farm fields because weed herbicides are sprayed.”

In addition to milkweed, pesticides also crush nectar-rich flowers, leaving the monarchs with fewer sources of sustenance to power their long flights. But habitat loss is not the only problem plaguing the monarchs; climate change is also changing the way they migrate across both the Eastern and Western US.

Rodrigo Solis, a PhD candidate at Simon Fraser University in Canada, is part of eButterfly, a citizen science platform that monitors monarchs and compiles a database. As temperatures warm across the continent, monarchs might be less inclined to fly south as winter approaches. This can push off their cycle by 10 days to two weeks, meaning that flowering plants may no longer be blooming and unable to provide nectar when the insects return to breed in spring, Solis says.

Solis notes that weather events can influence the monarch’s journey in several ways. If temperatures are lower in the Midwest in the winter, the insects might have to grapple with a scarcity in milkweed––the sole food source for monarch caterpillars.

The Eastern monarchs’ particularly long migration also means that they’re more at risk to a slew of changes. From insecticides to nectar availability to intensifying hurricanes, there’s no shortage of dangers for the Eastern monarchs, Solis says. That’s why the population has steadily declined to a now-critical stage.

Despite the downward trend, individuals and organizations are rallying to find ways to restore the monarch’s numbers. Certain groups like Monarch Joint Ventures have proposed taking back developed land such as highways to cultivate feeding spaces for monarchs. Their Monarch Highway along I-35, which runs through Texas, Oklahoma, Kansas, Missouri, Iowa and Minnesota, is one way of restoring habitat.

While Bruce commends the Monarch Joint Ventures in their efforts to restore the butterfly’s habitats, she says their placement along highways put the fluttering insects at higher risk of being hit by cars. As an alternative, she’s researching preexisting grasslands as potential homes for monarchs. She says these landscapes are great because they are already managed or deliberately burned in some way.

“Grasslands that are used for agricultural purposes, namely, grazing for cattle or sheep, often contain milkweed and plants for butterflies to nectar on,” Bruce explains. “And I think that it’s so important to learn how to optimize those conservation metrics on those protected lands. “

For people who want to plant blooms to help out monarchs, she stresses the importance of planting both early-flowering and late-flowering plants to bookend the season and ensure that there’s plenty of nectar to go around for different generations of the species. Solis and Bruce also both warn that there’s a variety milkweed. One common type called tropical milkweed is often found at convenient spots like Home Depot, but isn’t native to this part of the world, Bruce says. Unlike common milkweed, which dies off every year, tropical milkweed is perennial, which means that it blooms in multiple seasons and lasts for years. While that may sound good in theory, Solis says, this allows parasites that would have died off naturally with the plant to accumulate and infect the monarchs when they perch for nectar. Tropical milkweed can also trick monarchs into staying put during winter, throwing off their entire migration cycle.

[Related: It’s time to rip up your lawn and replace it with something you won’t need to mow]

All of these landscape-level changes could lead to long-term rebounds in North American monarch populations. But in the case of the recent bump in numbers in California, the effects might be more fleeting. Solis cautions that while 247,000 may be a good count, it still suggests a very low survival rate for the Western monarch eggs. He agrees that the drastic uptick is probably a result of wildfires, which might have made the land more favorable to milkweed growth.

“[Monarch] are super flexible like that,” Solis says. “They have that plasticity to adapt to whatever the habitat is providing. If it provides a lot, they’ll fill it up as much as possible.”

Given that the 247,000 figure is still only a fraction of the Western population from the ‘90s, conservationists like Howard remain concerned. Population numbers for invertebrates like monarchs often bounce all over the place when their numbers bottom out because of increased susceptibility to environmental changes, she says.

Even if the monarchs’ troubles aren’t over, their ability to climb back is cause for hope for all those trying to change the butterfly’s fate. With their capacity to respond to positive environmental changes, North America could one day see a healthy monarch population that uses a kaleidoscope of spaces tended by people to feed, rest and reproduce.