A warehouse in Denver became a repository of contraband to raise awareness against illegal poaching. 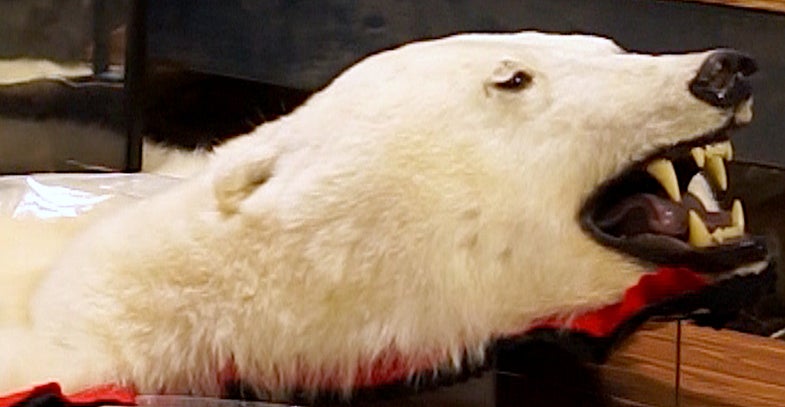 The front room features a bounty of exotic and decidedly illegal animal products—stuffed baboons, monkey skulls, miniature crocodiles dressed in straw hats. A mannequin dons a coat made of cheetah fur. A taxidermied giraffe cranes its neck over the scene. The National Wildlife Property Repository in Denver boasts another 22,000 square feet of storage space, all of it populated by the macabre remains of endangered species. “This repository is the only one of its kind in the world,” said Colleen Schaefer who runs the warehouse.

Schaefer previously worked for the Fish and Wildlife Service in Los Angeles, using specially trained dogs to scan incoming ships for illegal goods. Now, she leads a small group of officers, processing the crates of illegally traded products that are mailed to the warehouse, regularly adding powder made from rhino horns, purses made from giant sea turtles, and other curiosities to the collection of more than one million animal specimens.

The fight to curb the black market wildlife trade is largely hidden from view. The warehouse is a testament to the work of officers like Schaefer, who are vital to protecting endangered species. Around the world, people are buying rare animals they wrongly believe can be used as medicine. Traders in South Africa tout lion bones as an aphrodisiac. Some in Australia claim that bathing inside dead whales can cure rheumatism, while others in China and Vietnam say that powder made from rhino horns can be used to treat fever, gout, and other illnesses. In some places, demand for rhino horns is driving the species to the brink of extinction.

Laws against poaching are helping to curb the trade of endangered animals. But, by cracking down on poachers, governments have made hunting endangered animals a more risky endeavor, which has driven up the price of of each catch, making the trade more lucrative. Once the work of small, disconnected regional operations, animal trafficking is now a far-reaching $23 billion industry.

“Wildlife trafficking used to be a crime of opportunity,” Schaefer said. “But it’s really become a global, well-organized crime syndicate that trades in various components of wildlife in order to make money for whatever else they want to use it for.”

Species are disappearing at an alarming clip, and poaching isn’t the only reason for the decline of wildlife. Human ingenuity has also taken a toll on the natural world. Cars, trucks, factories, and power plants are pumping out heat-trapping carbon pollution, which is fueling drought, floods and extreme heat, imperiling countless species. Some, like the Pacific green sea turtle, are threatened by both wildlife traffickers and climate change. The sex of these creatures is influenced by the temperature of their nest. Warmer weather is turning large numbers of sea turtles female, putting the survival of the species at risk.

Schaefer is doing her part by working to protect sea turtles from poaching, helping to give them a fighting chance. As part of that work, she and her colleagues are educating the public about wildlife trafficking, leading tours of the warehouse and lending confiscated goods to classrooms, among other measures. “So many times when I give tours or interviews, the most common thing I hear is, ‘I had no idea,’” Schaefer said. “Hopefully we can do more good.”