This albatross couple adopted a baby of another species

The endangered birds are picking up some parenting practice. 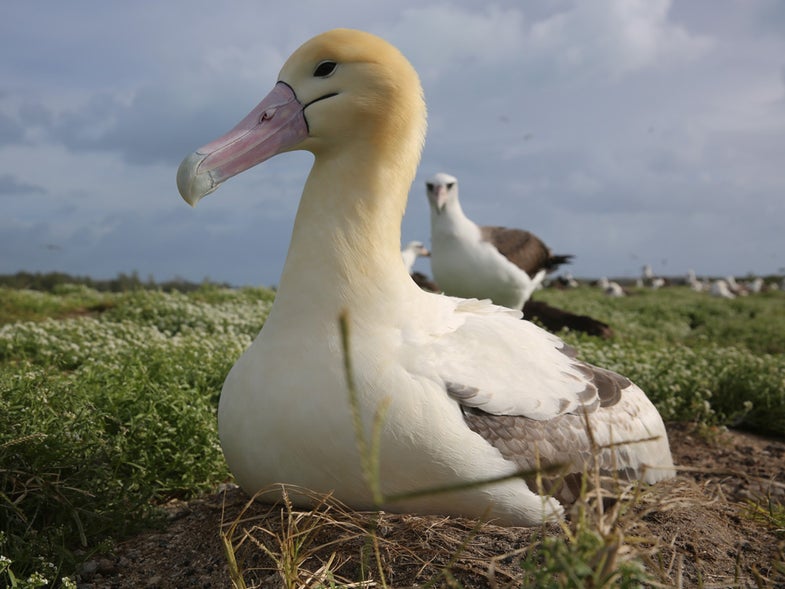 With its shiny golden yellow head and oversized bubblegum pink bill tipped in blue the color of the sky, the Short-tailed albatross is a bird straight out of a kid’s coloring book. But with long, slender wings stretching seven-and-a-half feet across and adapted for soaring long distances while skimming the ocean’s waves, these birds also embody the romance of the sea. Short-tailed albatross are the most endangered of the three North Pacific albatross species, and most of the world’s population of 4,200 nest on islands off Japan. However, on November 29, 2017, one was spotted incubating an egg at Midway Atoll National Wildlife Refuge, 1,200 miles northwest of Honolulu. In the bird world, that was news in and of itself. Only three Short-tailed chicks have hatched in the United States in recorded history. “Everybody was very excited when they appeared to be incubating an egg,” says Beth Flint, biologist with U.S Fish and Wildlife Service. “But we were a little suspicious because it was a late [in the season] for inception of a Short-tailed nest. Also, the egg seemed a little smaller.” Things got decidedly more interesting on January 24, 2018, when the egg cracked open and revealed a healthy and hungry chick—but not a Short-tailed albatross.

It took a week of patient waiting by biologists before the incubating parent stood up long enough for them to get a good look. The chick’s shorter bill and coloration confirmed suspicions: it was a Black-footed albatross. Measuring three-feet long and weighing 16 pounds, Short-tailed albatross are the largest seabirds in the North Pacific. Their smaller cousins, the Black-footed albatross come in at two-and-a-half feet and nine pounds. However, egg sizes of the two species can overlap, so no one was quite sure what to expect until the chick finally emerged.

Even though the little critter doesn’t represent the rare birth scientists had hoped for, there’s still reason to celebrate. The Black-footed babe could still do its part to help boost the Short-tailed population.

“Albatrosses are extremely long-lived animals, and they don’t necessarily get all their reproductive ducks in a row on the first try,” Flint says. The Short-tailed pair are first-time parents, and their experience with adoption will help them get it right the next time around. “It’s good, because even if it isn’t their egg, they’re getting practice. They’re learning how to do it.”

This isn’t the first time birds have crossed the species line to raise a chick. Last year, a pair of Bald eagles in British Columbia welcomed a Red-tailed hawklet into their nest and raised it alongside their own eaglets that, surprising some biologists, didn’t kill the hawklet in an act of siblicide. Because albatross only lay one egg a season, their chicks don’t need to fear death by a fellow nestling. On Midway, noted for being the largest albatross colony in the world, Black-footed albatross have also raised chicks of the third species nesting there—Laysan. This can happen when a storm jostles nests around, as they did in 2011 with a series of big wave events that included a tsunami triggered from the Tohoku earthquake off Japan.

In this case, no one knows exactly why the Short-tailed pair co-opted the Black-footed egg, whether they took over incubating duties after it was abandoned or if they pushed a Black-footed parent off its nest. What is known is that the pair themselves hatched on uninhabited Torishima, which translates to Bird Island, located south of Tokyo. Most albatross return to their place of hatch when it comes time to breed, a characteristic called natal philopatry; however, a few pioneers venture elsewhere.

Once, Short-tailed albatross were considered the most common albatross species in the North Pacific. But feather collectors around the turn of the 20th century, looking to supply the hat industry, clubbed the species nearly to extinction. Some reports estimate the loss of five million individual birds. With the population decimated, the only remaining breeding site was Torishima, an active volcano. What birds the feather collectors didn’t get, it was thought, a volcanic eruption did—and in 1949 scientists considered the species extinct worldwide. But in 1951, a few Short-tailed albatross returned from sea to breed. The Midway pair are likely descendants of those survivors.

The older and larger of the nesting pair at Midway, who scientists banded in 2003, sports his species’ striking adult plumage. He first dropped his webbed feet on U.S. soil in 2006. Albatrosses are known for having strong nest site fidelity. Once they select a nesting spot, they return to the same place year after year, just as this male did. He’s been nicknamed, “Lonesome George,” after the last surviving Pinta tortoise in the Galapagos, which died while conservationists searched for a female of his species with no success. Finding the perfect mate was a challenge for George the Albatross, too. A million-and-a-half albatrosses meet up at Midway every November to breed, but few looked and danced like George. Eventually, after years of standing out and standing alone, he got lucky. George’s chosen one was unofficially dubbed “Geraldine.”

“Everybody was delighted when he was first seen with another Short-tail, because for years he made attempts to dance with Laysan and Black-foots, but they were not interested,” Flint says.

Ornithologists use bands—typically placed around a bird’s ankle—to identify specific individuals that are part of scientific studies. The unique IDs are like a social security number for birds, and both George and Geraldine are banded. Because biologists haven’t been able to read the entirety of the band encircling Geraldine’s leg, they aren’t 100 percent sure who George’s selected partner is. But a partial read of the number is consistent with a Short-tailed albatross that showed up last season and was spotted performing the species’ ritualized courtship dance with George. If so, Geraldine hatched in 2008 and still displays the much-less-dramatic plumage of a juvenile.

“The answer is never simple,” Flint says. “The [Black-footed albatross] chick that hatched out and saw a big white breast of a Short-tail may or may not be confused when it grows up.”

That confusion wouldn’t necessarily doom the Black-footed bird to a life of solitude. Albatross species have cross-bred on occasion. A handful of hybrids exist at Midway, most of them the result of partnerships between Black-footed males and Laysan ladies.

“But there will be other clues for it in terms of the dance,” Flint says. Each species has its own specific dance moves, which are innate instead of learned behaviors. “It’s thought that courtship dances of albatross are important in species recognition as well as mate selection.” So when George and Geraldine’s young ward steps out onto the dance floor to find its own mate, genes may win out.

Meanwhile, the adopted Black-footed albatross chick is turning out to be the biggest of the season, because its parents are feeding it Short-tailed-size portions of squid and fish. Soon, it will be banded and is expected to fledge come June, taking its first flight to sea where it will stay for a few years learning the best foraging spots in the North Pacific before returning to land in search of that elusive mate—Black-footed or Short-tailed.

For now, the only thing to do is watch what happens. But it may be a long wait. On average, Short-tailed albatross don’t start breeding until six years of age. And with so few available choices at Midway, George held off until he was 15. The more imminent question to be answered, however, will come this November when George and Geraldine return for the next breeding season: Will they raise a chick of their own? Flint is hopeful they will—that this is the start of a long and fruitful relationship that will produce numerous Short-tailed albatross in the future. But one thing’s for sure. “It will be super interesting to learn what happens,” she says.