Young manta rays have a sanctuary in the Gulf of Mexico. 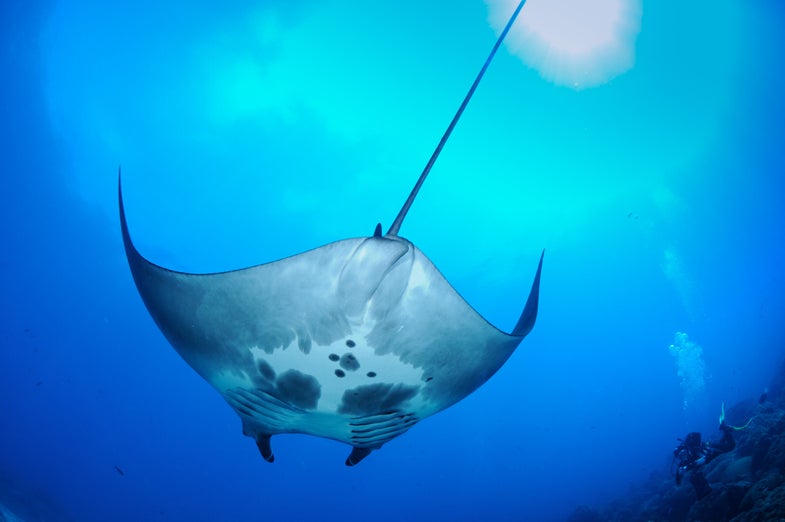 Late in the evening, a government-owned catamaran departs from Galveston, Texas nearly every week of the summer. It travels through the night, a hundred miles down the Gulf of Mexico, to reach a series of reefs that rise up from the seafloor. The boat parks beside the coral for several days, abutting the edge of the continental shelf. There, biologists from the National Oceanic and Atmospheric Administration (NOAA) can plumb the water’s depths to survey its creatures.

The largest mantas glide through the water with a 23-foot wingspan, longer than a pickup truck. “They’re like gigantic flying saucers,” says marine biologist Joshua Stewart, lead author of the paper. “You’re absolutely dwarfed by these creatures.” But at Flower Garden Banks, the mantas are much smaller, a mere seven feet across on average.

Stewart, a PhD candidate at Scripps Institution of Oceanography, first ventured to Flower Garden Banks in 2016, aboard a research vessel named the Manta. He was hoping to gather tissue samples from resident giant oceanic manta rays, to learn whether the group in the sanctuary was related to other populations in the Gulf. But when he spotted the fish on his first dive, he couldn’t get over its size.

“He was so excited. He was giddy talking about how small that manta was,” says Michelle Johnston, a NOAA marine biologist and Stewart’s diving partner for the trip.

“It wasn’t something that struck us as strange,” Johnston explains. She and her colleagues do most of their fieldwork in the sanctuary and didn’t think twice about the mantas’ dimensions. But Stewart, a ray expert, knew the group flapping through this patch of ocean was unique.

Stewart had seen a few young manta rays before, he says, “but it’s super rare.” In the sanctuary, the equation is reversed: mantas of many sizes, but hardly any adults. “It goes all the way from newborn pups up to right before they become mature,” Stewart says. “Some of these guys are staying there for multiple years.”

He sorted through 25 years’ worth of dive logbooks and photographs to figure out if mantas have always been hanging around Flower Garden Banks, staying until they’re big enough to journey from the reef’s protection.

Mantas have unique markings on their bellies, like a fingerprint, so Stewart could identify individuals across the records. The males’ reproductive organs, called claspers, are also visible from photographs, so he could tell whether the pictured mantas were sexually mature.

Identifying where the kiddos hang out is important because so little is known about their basic biology. “They are a group of species that have tons of knowledge gaps, despite being this popular creature that divers love to see,” Stewart says. Like many open ocean species of sharks and rays, no one has ever seen mantas give birth in the wild and next to nothing is known about their early life.

Finding important habitats for mantas also makes it easier to protect them. This year, the government listed the giant manta ray as threatened under the Endangered Species Act. The move comes after recent population declines, likely due to pressure from fisheries and warming waters, which may affect the abundance of the tiny plankton mantas love to eat.

It may be a long journey out to see them, but mantas are a pretty magical fish to protect.

“It’s amazing to have a gigantic creature coming over and doing these passes over your head, just wanting to find out more about you,” says Stewart. “They are one of the coolest animals that I’ve ever spent time with in the water.”