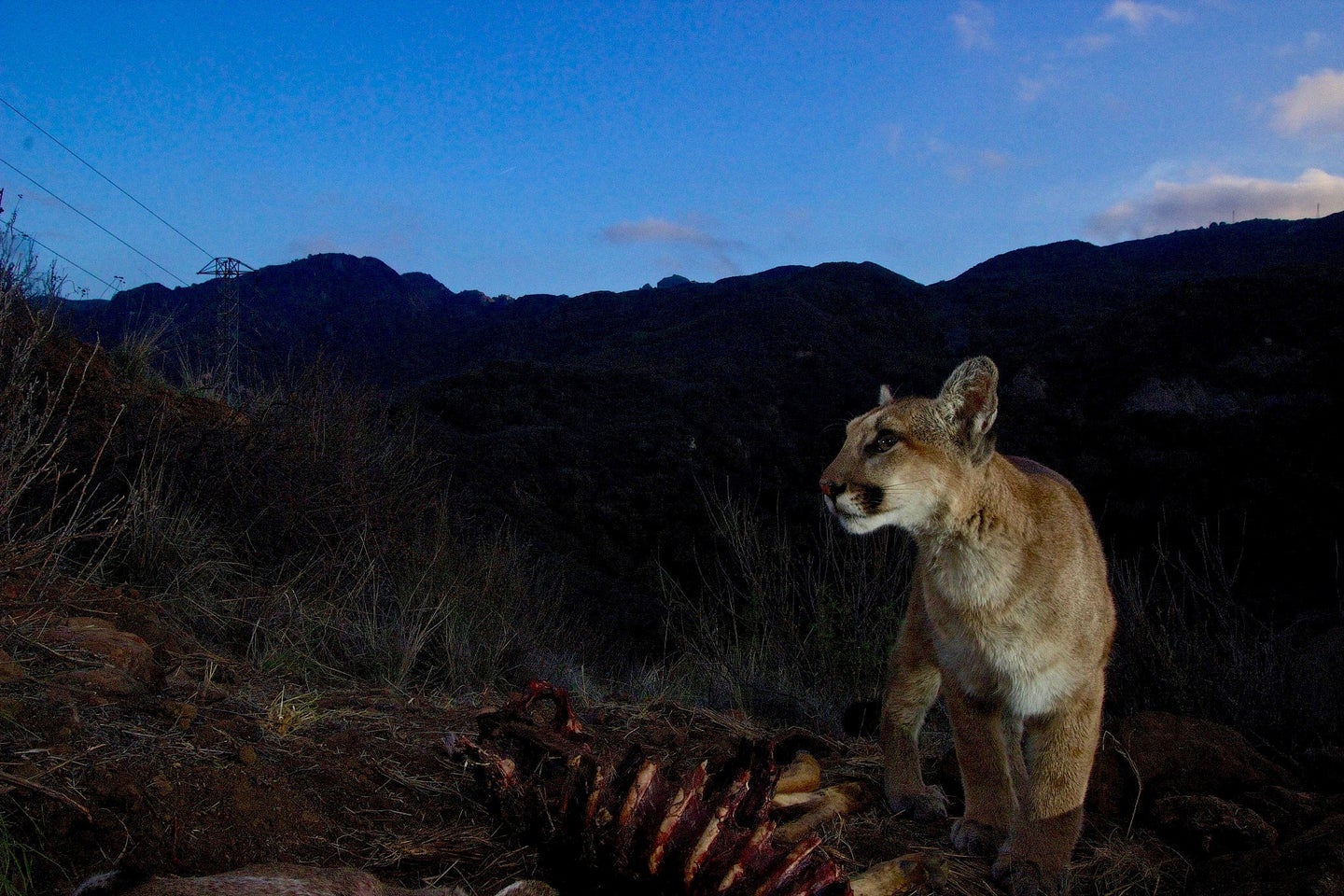 In 2011, wildlife researchers in Southern California were overjoyed to find that a new male mountain lion had wandered into the Santa Ana Mountains, joining a small and isolated population of the big cats there. By the time his radio collar stopped working in December 2013, M86 had fathered at least 11 kittens—a huge flux of genetic diversity for the inbred population of less than 20 cougars. He was the only new cat to successfully join and reproduce with that group in 15 years.

But then, in 2015, his near-decomposed body was found along one of the roadways framing his habitat, presumably hit and killed by a car.

This is a common fate among Southern California wildcats. The Santa Ana population, located southeast of Los Angeles, is particularly is at risk of death by car collision. And the nearby Santa Monica mountains’ population is not doing much better. Now, a new study shows that these groups’ isolation—largely a result of roads, homes, and other development divvying up their once-contiguous habitat—puts them at risk of extinction by 2050, especially if inbreeding begins to degrade their health.

“We can’t just sit on this issue—we’ve known about the potential issues for a long time,” says T. Winston Vickers, one of the study’s authors and a veterinarian at the Karen C. Drayer Wildlife Health Center at the University of California, Davis. “The moral of the story is more animals need to get across the road.”

Without the ability to roam into new territory, the cats in these small groups inevitably breed with close relatives. Scientists are worried about inbreeding depression, in which genetic defects from inbreeding impact survival. It happened to Florida panthers: in the 1990s, they numbered fewer than 30, and were in such poor health from inbreeding that biologists had to bring in cougars from Texas to mate with them and help the population recover.

Inbreeding adds to the many threats the SoCal mountain lions already face—collisions on roadways, getting shot by landowners after the cats have hunted livestock (although there’s been some progress here), and growing wildfires. Their small numbers put them especially at risk of extinction should a big fire or virulent illness strike.

To figure out how imminent that extinction might be, biologists used data collected on the cats from the 1990s to 2016. There was DNA information drawn from blood and tissue samples, plus estimates of the number, ages, and sexes of the mountain lions. They then fed that information into a model that considered how factors like immigration (cats moving in from outside populations) and inbreeding affected their odds of survival.

Even without accounting for inbreeding depression, the study concludes that the Santa Ana and Santa Monica mountain cats have a 16 to 29 percent chance of extinction by 2050. The odds decreased with more immigration, but then the scientists added in the potential effect of inbreeding. By their estimates, the median time to extinction with inbreeding depression would be about 15 years from now.

Should they disappear, we’d lose more than striking, iconic carnivores. They provide benefits to the ecosystems they inhabit. Like any top predator, they keep prey populations—in this case, mostly mule deer—in check, which in turn protects vegetation from being overly grazed.

The news is especially worrisome because some mountain lions are already showing signs of inbreeding defects, says Vickers. “We have detected or captured two lions with kinked tails, and they were the two most inbred animals in the population,” says Vickers. The Florida panthers also had these kinked tails at the same time that they were having other inbreeding-related issues, such as greater mortality and smaller litter size. “It does worry us that maybe we’re starting to see the first signs of inbreeding-related physical abnormalities.”

The Santa Ana and Santa Monica mountain lions are not the only isolated population in California. There’s about six groups on the coast that are essentially “islands” or “semi-islands,” says Vickers. The results of the study are “clearly a warning that the current paths are going to result in all likelihood in multiple populations that have these same issues.”

For Vickers, it’s a demonstration of just how impacted these areas have become by highways, shopping malls, and homes. “Here’s a type of animal that’s incredibly mobile, basically leaps tall buildings in a single bound, they’re really super skilled animals, and yet humans have found a way to divide them up,” he says. “I think it tells us how powerful humans are at altering the landscape.”

The news is gloomy, but it also shows a clear way to help the cats survive: bringing new individuals into these populations. “The nice thing is that the model shows that with just slightly higher levels of immigration we can actually see these populations maintain their genetic diversity and the extinction probability goes way down,” says John Benson, the study’s lead author and vertebrate ecologist at the University of Nebraska.

The key is habitat connectivity. There are two main strategies for this: protecting the habitat corridors the cats already use from development, and building bridges to re-connect currently isolated areas. In the short term, even transporting cats around between different mountain ranges could bring a boost to their health and chances of surviving. “For decades, literally, it’s been known that there needs to be better connectivity for wildlife,” says Vickers. “I think it’s time we start putting protocols in place for moving animals.”