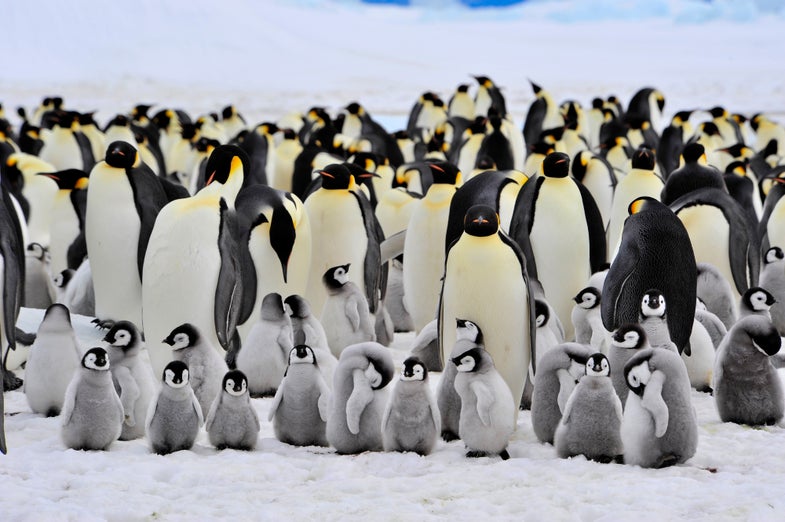 May in Antarctica means winter, with frigid temperatures and nights that stretch out, shoving what scant daylight remains into a shrunken block of a few hours, if the sun manages to peek above the horizon at all.

Almost 20 years ago in May, scientists disembarked the icebreaker R.V. Nathaniel B. Palmer at Cape Washington, at the edge of the ice covering the Ross Sea. It was a short two-day detour in a cruise that lasted for over a month, a trip to one of the most remote and inaccessible populations of animals in the world.

The biologists made their way toward one of the largest existing Emperor penguin colonies, trekking along the unfamiliar terrain in what the researchers describe in a new paper as “moonless dark.”

Gerald Kooyman walked in front, his eyes adjusting to the dark night. He and his human companions weren’t alone. Even in the faint light reflecting off the snow, Kooyman, a biologist at Scripps Institution of Oceanography, noticed fresh penguin tracks heading from the colony out to sea.

It wasn’t just tracks. Kooyman and his colleagues heard the birds calling to each other, and noticed groups of penguins on their way to or from the sea, and even swimming off the side of the boat. By all rights, the male birds should have been readying themselves for one of the most intense fasts on the planet, a 115-day marathon of not-eating during which the male incubates a single egg while the female heads out to sea to feed. But in some places, where the sea is close enough to the colony, some of the penguins apparently head out into the dark, wintry waters for a sustaining snack before they get down to the important business of keeping their egg warm.

The research, published in the Journal of Experimental Biology didn’t explicitly see the penguins feeding in the dark, but did attach satellite tags to four birds, monitoring them as they dove underwater from June to August.

“If they’re going in the water, why would they do anything other than feeding?” Kooyman says. “They’re usually visual predators, but penguins can feed at night. And this, I think, is an example of that.”

Kooyman thinks that the behavior might give penguins in these more Northern colonies, closer to the open water, a dietary advantage. Assuming that some of the penguins they saw going into the water were breeding males, Kooyman says, “Any feeding that they do before the egg laying, which occurs during the first couple of weeks of June, means they’ve broken the fast to some degree. They’ve gotten a boost in their diet. Instead of 115 days, it’s 70 or 90 days, and any little bit helps in this situation.”

The penguins that they tracked might have also been females that had just laid their eggs, or non-breeding penguins, and other observations have shown that there is some penguin traffic in and out of a colony during the pre-laying period. But figuring out how all of the information fits together is tricky, because of the remoteness of many Emperor penguin colonies.

“Most colonies are a long way away from research stations and rather difficult (if not impossible) to access. There are some colonies in East Antarctica where winter observations are not that unusual but in other areas (Ross and Weddell seas and West Antarctica) such observations are exceedingly rare. The data presented here are rare because Kooyman and his colleagues managed to get to a colony (in the Ross Sea no less!) before laying commenced. That is possible only at very few sites,” says Australian scientist Barbara Wienecke via e-mail. Wienecke also studies Emperor penguins but was not involved in this research.

Cape Washington, where Kooyman and his colleague Robert van Dam made the observations, is located to the north of some other colonies much further inland. Kooyman thinks that one reason the colonies at Cape Washington and other locations on the Ross Sea are so robust might be because they have easier access to food, and don’t have to fast for quite as long as their more southerly compatriots.

To confirm the findings, researchers will need more data from more Emperors, potentially using more advanced transmitters that are now available. That means securing precious grant money, and passage on an icebreaker—one whose captain is willing to drop them in a nearly inaccessible spot in the middle of an Antarctic winter, with little chance of rescue if something should go wrong. It’s a hard sell, and Kooyman has been trying to convince funding agencies to support a return trip for 20 years. “Hope springs eternal,” Kooyman says of future efforts. In spite of the difficulty, he does have proposals out for another project to go and study these penguins in winter, and perhaps get a better picture of their feeding and diving habits.

“Once you’ve worked with Emperors it’s hard to let go of them,” Kooyman says. “They’re wonderful animals, and they occur in strikingly beautiful places.”