Second place is scarier than it sounds. 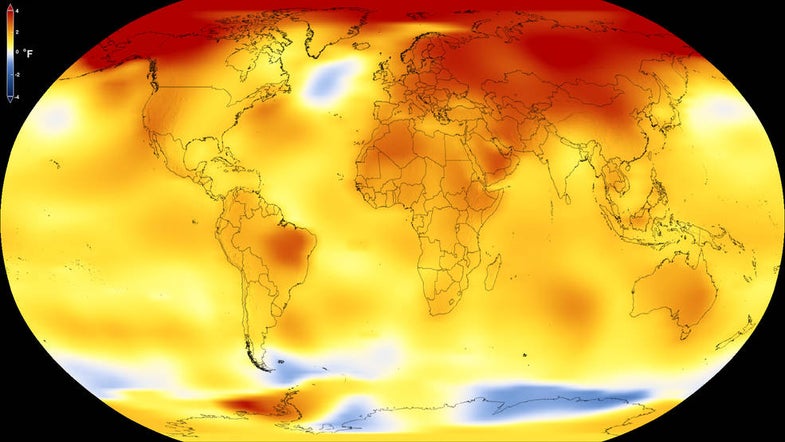 It was so hot in 2017 that a computer program threw out an entire year’s worth of Alaskan weather data because it seemed like a statistical anomaly. It was so hot, the National Oceanic and Atmospheric Administration now predicts that Arctic ice might not reliably freeze every year anymore, and the region’s tundras are increasingly green as permafrost thaws.

But surprisingly, 2017 wasn’t the hottest year on record, according to NASA. It came in second, thanks to an exceptionally warm El Nino year in 2016.

Nevertheless, the slight blip in ever-increasing annual global temperature is consistent with an overall warming trend. The planet’s temperature has risen by about about two degrees Fahrenheit in the past century, largely due to human activities that emit greenhouse gases. All five of the warmest years on record since 1880 have occurred since 2010.

NASA scientists calculated that if the effects of La Nina (an air circulation pattern which tends to cause cooler weather) and El Nino (which tends to cause warmer weather) were removed from the equation, 2017 would have ranked as the number one hottest year on record. By smoothing over the data from shorter-term La Nina and El Nino cycles, climate scientists can get a better picture of long term trends in climate change, Gavin Schmidt, the director of NASA’s Goddard Institute for Space Studies says. “The key issue is, what causes the planet to warm up on an annual basis, one year to the next, is not the same as what’s making the planet warm up over the last 50 years.”

Volcanic activity is also smoothed over in the analysis, since the sulfur particles spewed into the atmosphere along with ash and dust temporarily cool the earth’s surface by blocking the sun’s warming rays.

But 2017 was so hot that even the cooling effects of La Nina and a few volcanic eruptions didn’t drag it down further in the annual rankings. And more record-breaking years are likely ahead.

Even though parts of the U.S. experienced record cold this January, global warming is far from over. That’s the difference between weather, which is short term and relatively unpredictable, and climate. It can be unusually cold across the continental U.S. while Alaska experiences unusually warm winter days. Meanwhile, the global average temperature crawls upwards.