Yes, monkeys are having sex with deer. Why would they do that? 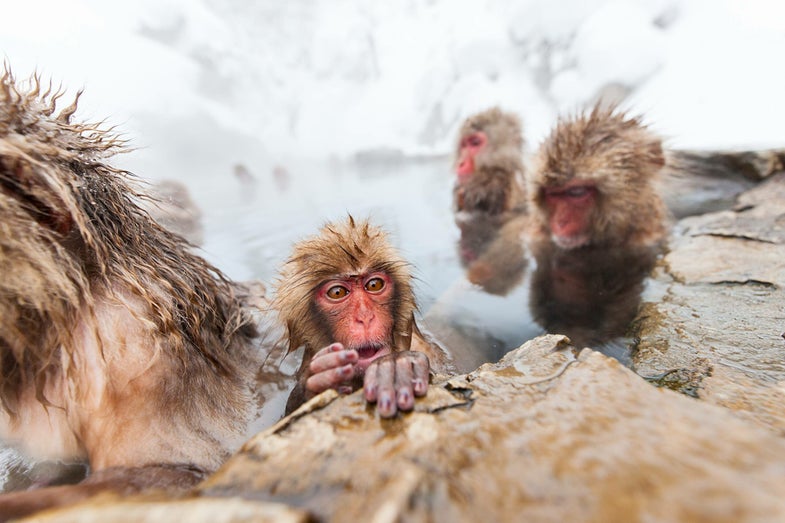 Most humans don’t expect all sex to be procreative. There are so, so many ways in which consenting adults can conspire to get freaky without making babies.

We’re not the only species that enjoys sex as more than a means to an evolutionary end. Bonobos practically build their (peaceful and matriarchal) society on the exchange of sexual favors. There are gay creatures all over the animal kingdom. Scientists even caught brown bears engaging in oral sex.

Even if you’re uncomfortable with the idea, there are a lot of animal sexual shenanigans in the world. And sometimes they happen between totally different species. A recent study in the journal Archives of Sexual Behavior highlights a newly-discovered instance of interspecies intercourse in central Japan: apparently, adolescent female Japanese macaques have taken to mounting sika deer.

It would be kind of adorable if monkeys were just hitching rides on the back of their long-legged neighbors (which they sometimes do), but researchers say they’ve determined this ritual is sexual in nature. They think it could be the start of a new social trend, with young macaques females—who are known to mount one another in a sexual fashion—gradually picking up the idea that sika stags can provide release.

“We first witnessed this behavior in 2014, and the locals who interact with this population on a daily basis had never noticed it before then. So we were quite lucky, because I think we witnessed the start of it,” study author Noëlle Gunst-Leca of the University of Lethbridge told PopSci.

The deer get something out of the deal as well, though it doesn’t seem to be quite as sensuous. “Not surprisingly,” the authors write in the study, “adolescent female macaques spent the vast majority of their consortship time in contact with the deer’s body parts offering the most stable contact zone (i.e., back and rump,and to a lesser extent, shoulder, neck and head).” While doing so, the researchers note, the macaques would perform grooming behaviors on their paramours; picking ticks and other skin parasites off of their backs and necks. “They groom areas not easily accessed by deer,” says Gunst-Leca. But while the monkeys sometimes playfully ride the deer “rodeo-style,” Gunst-Leca says, the new mounting behavior is definitely sexual. “The females mount the deer and thrust their pelvis,” she says.

Not all deer will consent to this exchange. The researchers observed 13 successful consortships, and all but one involved adult male deer (one involved an immature male). Of the eight failed interactions they watched, the five that involved females or immature males ended with macaques being bucked off onto the ground. But only one interaction with an adult male ended with such a rebuff. The other two failed because another female macaques interrupted to have her own shot with the deer.

It’s a perplexing practice, to be sure. But Japanese macaques aren’t alone in sometimes seeking sex with another species.

Yes, animals can have sex with totally different animals

Sexual behavior between species, otherwise known as interspecific or heterospecific sexual behavior, isn’t always quite as shocking as this particular instance. Lots of hybrids exist to prove that animals can be less discriminating when choosing sexual partners, especially when there are other closely-related species around. Males might even seek out mating partners from a different but closely related species if their would-be paramour exhibits the same desirable characteristics that they’d seek in females of their own species, like large size.

“It’s not very rare in the animal kingdom,” Gunst-Leca says. “It probably happens more frequently than we think.”

Because we’ve turned dogs, who are all the same species, into animals that definitely don’t look like they should want to have sex with each other, they also provide a fine example of just how impractical animals can be when they pick someone to mate with. (Or even something—dogs are known to hump legs, sofas and furniture.) Male chihuahuas are perfectly capable of impregnating large dogs like German Sheperds, given the opportunity (i.e. a step stool). Animals like dogs that are domesticated or otherwise raised in captivity have a tendency to get a little weirder in their sexual tendencies, simply because they’ve got access to a strange variety of other animals and a lot less to lose—it’s not like they’re going to lose access to food or companionship by expressing their stranger proclivities.

But such dalliances generally get less common the less closely related a pair of animals are. A 1944 study on the sexual interactions of a chicken, and a pigeon, for example, notes how strange it is that animals from different orders would behave in such a way. But at least they were both birds.

Things can get a lot darker. Antarctic fur seals have picked up the habit of trying to mate with king penguins, an animal they would more often just kill and eat upon meeting. Meanwhile, male southern sea otters occasionally rape young harbor seals to death, which makes the whole “you-scratch-my-back-and-I’ll-let-you-masturbate-on-it” thing the macaques and deer have going on seem a lot more reasonable.

Still, while it’s not like no one could have ever seen this coming, the Japanese macaques situation is pretty unusual. The researchers believe theirs is the first quantitative report on non-human primates getting it on with non-primates in the wild.

Why does this happen?

Interspecies sexuality is more common in species that are similar to one another because it makes more sense; these animals are more likely to get confused, or to see the qualities they naturally seek in a mate showcased rather inconveniently in the member of another species. It’s a little tougher to guess the reasoning (or lack thereof) behind the mating of more disparate creatures.

Sometimes aggression is to blame. The aforementioned terrible sea otters, for example, are incredibly violent and undiscerning when it comes to copulating with their own species, which makes it less shocking that they sometimes attack animals they clearly have no intention of producing offspring with. Trying to mate with basically everything all the time isn’t the most endearing evolutionary strategy to begin with, and it can result in males becoming so unscrupulous as to mate with, well, basically everything all the time.

“In some cases, predatory behavior is redirected into sexual arousal,” Gunst-Leca says. “But this behavior can also serve as practice for copulation with their own species. And in most cases, it’s simply because there’s a lack of mating outlet for males.”

There’s nothing aggressive about macaque-on-deer interaction, she says, but her team thinks the young ladies are spurred by some combination of those other explanations.

“Our research on the sexual development of this species shows that these adolescent females are not the preferred partners of adult males,” she says. The monkeys become fertile around age five, but are generally rejected by male partners until they’re older. That’s why it’s incredibly common for females to mount one another. “They’re not entirely homosexual,” Gunst-Leca says, “but they’re certainly bisexual.”

The female monkeys might see stags as a great sexual outlet, or they could simply be practicing on them for encounters with other female monkeys. Meanwhile, the vulnerable young females avoid rejection from—or worse, violent and dangerous intercourse with—males of their own kind.

“They could see this as safe sex,” Gunst-Leca explains. “I’m sure you noticed in the video that the stags were quite passive.”

On that note, the team isn’t sure why male stags were so much more receptive to the behavior than others, but they suspect it may just be a question of shyness. “In general, female and younger deer were very shy with human observers, while the stags were quite tolerant of our presence,” she says.

It’s not hard to imagine how this new behavior first came to pass, Gunst-Leca says, since the two species spend a lot of time around one another. The deer tend to eat food dropped by the foraging macaques, and young monkeys will sometimes jump onto a deer’s back for fun.

“During this social play, some young female must have experienced a kind of genital stimulation. It’s what we’d call a developmental byproduct of nonsexual activity,” Gunst-Leca says. After seeing one instance of the behavior in 2014, her group saw five individuals participating while recording data for the new study. “If this spreads, it could be the start of a culturally-maintained phenomenon,” she says. “But only if it’s transmitted socially. So future observations could tell us if this group specific oddity is just a short-lived fad—which can happen—or the beginning of something else.”