The Mexican cavefish have no eyes, little pigment, and require about two hours of sleep per night to survive. 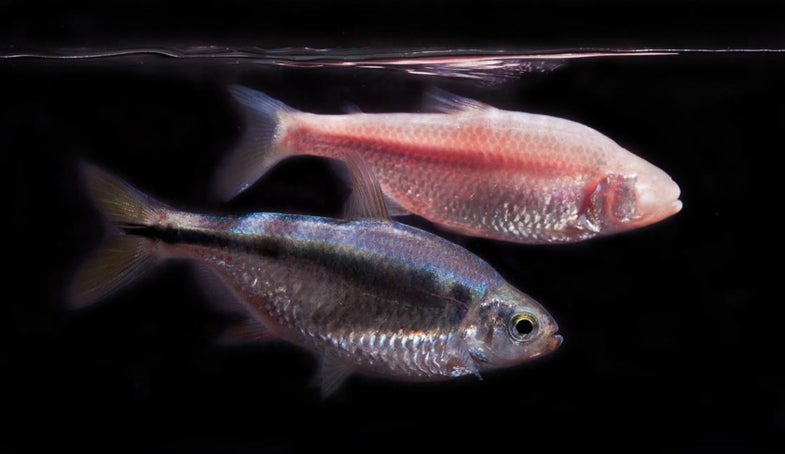 The fish species Astyanax mexicanus exists in two populations. The cavefish, top, evolved to have no eyes and little to no pigment. The surface dwelling fish, below the cavefish, have eyes and more pigment. Alex Keene/Florida Atlantic University
SHARE

There’s something about the blind Mexican cavefish that will make you quite jealous: To survive and thrive, they require two hours of sleep each night; no more, no less. Imagine everything you could do with those extra six hours.

Among all the animals in the world that need their zzzs, species differ remarkably in their sleep patterns and behavior. Humans fall somewhat in the middle of the spectrum, requiring a strict eight hours for adults, according to recent studies. On one end of the spectrum are the brown bat, which sleeps about 20 hours a day, and the giant armadillo and the python, which both take in 18 hours per day. And then there’s certain cave dwelling species, including the Mexican cavefish, which gets by unscathed, health-wise, with about 2 hours of sleep per 24-hour period.

“We think we can use cavefish to ask fundamental questions about why we sleep and why there is so much variation in sleep across the animal kingdom,” says Alex Keene, lead author of the paper and a neuroscientist at Florida Atlantic University. “If we can figure out why these fish get by despite little sleep, we may be able to find better ways to manipulate sleep in humans.”

For over a century, the species Astyanax mexicanus have mystified scientists. The species exists in two very different populations: A surface population, known as surface fish, that inhabits rivers, as well as multiple populations that live in caves, known as cavefish, without access to sunlight. The cave populations have evolved this sleeplessness whereas the surface populations have not. They sleep normally, a solid eight hours of fish sleep per night. They look different, too. The cave-dwelling populations all have extremely small or completely absent eyes, and they have very little pigmentation or color in their bodies—both of which (sight and pigment) are involved in regulating sleep patterns.

What confused the researchers most, however, were two unique traits about the cave dwelling populations: First, how these fish—who live about 30 years in the laboratory—are able to both not fall or stay asleep for more than 2 hours every 24 hours, and second, not suffer any health consequences from it.

In a study out this week in the journal eLife, researchers narrowed in on a neuropeptide called hypocretin, or HCRT. This protein is found in the hypothalamus of many animals, including humans. Its location makes sense. The hypothalamus is a tiny chunk of many animals’ brain space and it executes functions in our body that we have little physical control over, like body temperature, thirst, hunger, and sleep. Hypocretin has been studied quite a bit, particularly in narcolepsy, a sleep disorder in which a person tends to fall asleep during any relaxed setting. Previous studies found that narcoleptic dogs had mutations in the hypocretin receptor, and there’s been similar studies to suggest that hypocretin is involved in human narcolepsy as well, and that it regulates sleep in flies and zebrafish.

In this study, researchers compared the number of hypocretin proteins in the Mexican cavefish to their surface dwelling counterparts. They found that the dark, cave dwellers had significantly more of these neuropeptide proteins than the surface fish that have access to sunlight. And the blind cavefish had an increased number of receptors on their cells for hypocretin to attach to. To really understand what the hypocretin does, the researchers t gave both fish populations specifically formulated drugs that prevent the hypocretin from attaching to its receptors.

For the cave-dwelling fish, the drugs acted like human NyQuil, knocking them out cold in a dreamy slumber. But for their surface level cousins, it barely had any effect at all. All of this told the researchers two things that had never been understood before: Neural and genetic differences exist that contribute to the evolution of sleep; and these differences can be tweaked, using drugs, to induce or change sleep behaviors.

“I think HCRT is just one factor, and there are likely many novel sleep genes that have not been identified in any animal that contribute to sleep loss in cavefish,” says Keene.

What does this all mean for sleepy animals everywhere? For one, it shows that there is at least one way (and probably many others) that allow animals to deprive themselves of sleep without experiencing any ill health consequences from it. In humans, there are mounds of evidence showing that sleep, and the proper amount of it, is a vital component to maintaining proper health, and as such, staving off disease. Sleep deprivation studies show that lack of sleep, both in the short and long term, can increase blood pressure, impair blood glucose levels, and increase overall inflammation. All three of these changes directly influence an individual’s potential to acquire disease like obesity, cancer, diabetes, and heart disease.

Unlike cavefish, we have not evolved any mechanisms that allow us to stay up all night and cram for an exam without later paying for it. But our little cave-dwelling friends might give us hope.

“There are all sorts of drugs to help induce sleep, or keep people awake,” says Keene. “The interesting thing about cavefish is they appear to be healthy despite dramatic sleep loss. If we understand why, it might be possible to develop novel stimulants without the negative consequences that typically accrue with sleep loss.”

However, Keene says there’s still work to be done. The group of cavefish that he studied is just one of 29 independent cavefish populations. He wants to know if these other populations developed similar yet genetically different mechanisms that also allow them to get by with little to no sleep. He also wants to understand what else hypocretin involves itself in; there’s evidence that it promotes food consumption in fish and other mammals, and Keene and his team had previously found that prolonged starvation increases sleep in blind cavefish, though it has no effect on sleep in surface populations. Understanding how eating influences sleep in these fish and other animals could provide a clearer and fuller picture of how sleep is regulated—and how we can potentially tweak that cycle without causing harm.

Until all that is worked out, the best thing we can do for our health is try to get a solid eight hours each night, and rest assured that as of yet, there’s nothing better for your health.