How do fireflies power their blinking butts?

The bioluminescent dating game going on in your backyard. 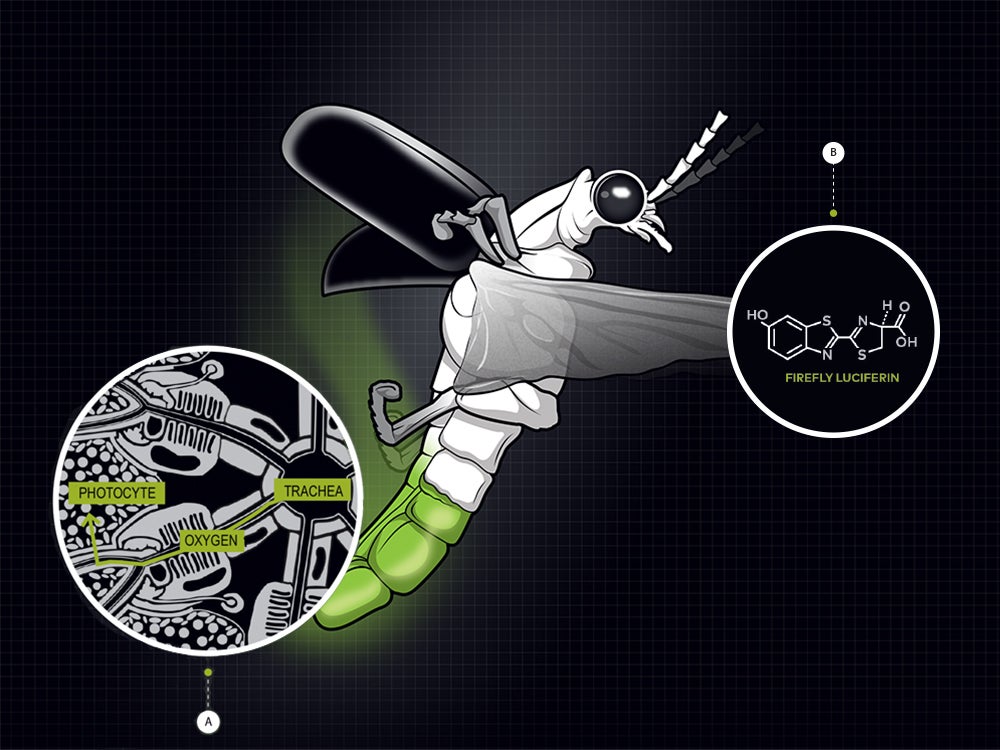 Fireflies are butt gals. So are their male amori. On warm summer nights, both sexes home in on the blinking light of their crush’s derrière. The rest is romance. Which makes it almost heartless for us to ask: What makes their bums blink? It’s mostly a matter of chemistry, triggered by seasons, times of day, and those flashing signals. For Photinus pyralis, the common eastern firefly that populates North America, it is a choreographed dance. Next time you’re sitting on the sidelines, or grass, here’s a guide to the bioluminescent dating game going on in your backyard.

Step 2: As the male flies, oxygen enters its bum through tubes in its abdomen called tracheae (A). These run from the exoskeleton surface to light-producing cells known as photocytes.

Step 3: Inside the photocytes, the luciferase enzyme merges with the light-producing luciferin molecule (B), catalyzed by oxygen and energy-storing ATP. The result: oxyluciferin, a compound with excess energy in its atoms that is released as light. It’s visible through transparent segments of the bug’s lower abdomen.

Step 4: The butt of a male firefly undergoes this process every 5.5 seconds. When a guy catches her eye, the female flirts back by flashing her signal about 2 seconds after the male (by means of the same chemical ­mashup)—a semaphoric wink and blush.

Step 5: The male follows his lady’s light to find her and mate. A few days later, the female lays fertilized eggs in the ground, which hatch two to four weeks later—all thanks to a magical light show.

These small crustaceans jet out bioluminescent liquid to confuse predators and make a hasty escape.

The anglerfish’s fleshy-tipped “rod” full of bioluminescent bacteria lights up to lure smaller fish into its jaws.

Glowing patches below these squids’ eyes cancel out its shadow so predators below can’t detect them.