But boy is it big. 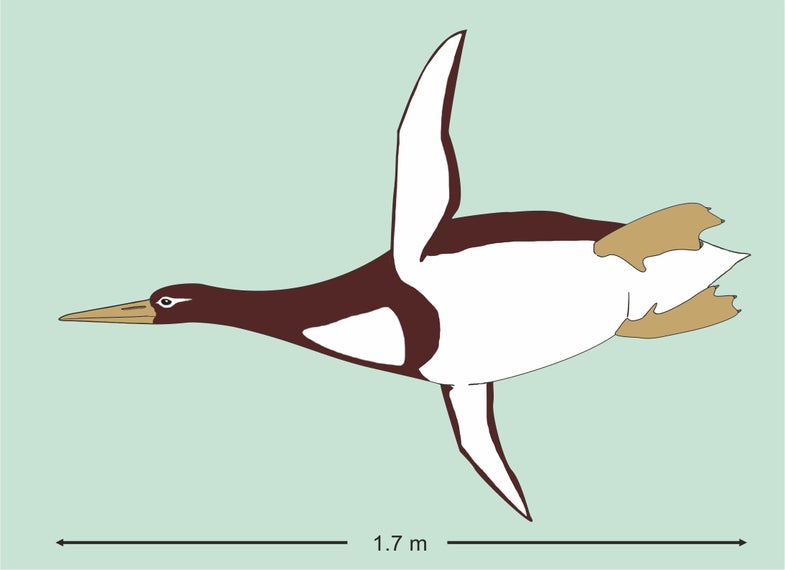 Imagine you’re in New Zealand during the late Paleocene, around 60 million years ago. That means you’re pretty much in Antarctica (thanks, continental drift), but don’t worry: you’re enjoying subtropical climes. Then you hear something large shuffling toward the shore, coming up from behind you. Wow, you think, did two humans time travel to this exact spot at the exact same time? How awkward.

You turn around to see a penguin as big as a grown man, gobbling up fish with a long, hook-like beak.

That would be one Kumimanu biceae, a newly-discovered species described today in Nature Communications.

Today there are 17 species of penguin prowling the planet, and they’re all frickin’ adorable. New Zealand actually boasts the smallest extant species, which clocks in at an average of 13 inches tall (omg). The biggest—the aptly-named Emperor Penguin—still only reaches 48 inches. Big for a bird, sure, but you’re likely not intimidated by a waddling animal the size of a third grader.

Things used to be very different for our flightless friends. Based on its bones, researchers believe Kumimanu biceae grew to be almost 6 feet tall, and may have weighed over 220 pounds. That’s not even the biggest extinct penguin species we know of. Some 37 million years ago in Antarctica, there roamed a species that grew to stand 6 foot 8 inches tall. That’s a LeBron James-sized penguin. To help you ponder that, we’ve found a picture of LeBron James standing next to actress Amy Schumer who, at 5′ 7″, is a roughly-average-height human being. Please note that she is wearing heels, so this is actually what it would look like if an average-sized human in high heels stood next to the largest-known species of ancient penguin.

But study author Gerald Mayr of the Senckenberg Research Institute and Natural History Museum Frankfurt points out that it’s not surprising some penguins were once big.

“Actually, it is often observed that flightless birds become very large,” he told PopSci via email. “One rather has to answer the question why there are no giant penguins today.”

The new species helps to answer that question by filling in some of the evolutionary history of the lineage. Kumimanu biceae is one of the geologically oldest penguins ever found, putting it close to the base of the penguin family tree. Most other giant penguins (that we know of) came on the scene tens of millions of years later. And there are relatives between Kumimanu biceae and those later cousins that were quite small, suggesting their gigantism evolved in different times and places.

“It now appears that giant size evolved early and multiple times in penguins,” Mayr said. “The fossil also shows how little we actually know about the evolution of penguins, even though more is known about the fossil history of penguins than that of many other avian groups.”

So it’s not that penguins shrank back down—there were actually large and small species alike running around during this particularly boisterous period of evolution. The demise of the dinosaurs some 5 million years previous had left a lot of ecological niches open. For a while, the most successful land critters were often the tiniest rodents, reptiles, and yes, dinosaurs (also known as birds). They didn’t need as much to live on. But once the planet had plenty of time to recover, those tiny ancestors could branch out to form a whole new world of distinct species. That’s how primates got rolling on the track that would eventually create humanity, and it meant the late Paleocene was an extremely diverse place.

At some later point, giant penguins must have started dying off while the little guys prevailed.

“The disappearance of these giants seems to correlate with the radiation of marine mammals,” Mayr said, such as toothed whales and seals. It’s likely that some combination of direct predation, food competition, and tussles for places to breed on land pushed the largest penguins out of the way.

There’s one question that Kumimanu biceae doesn’t quite answer. Scientists still aren’t sure when penguins lost their ability to fly, Mayr explained. At some point, ancestral birds must have skewed so much more toward swimming than flying that they selected for waterborne adaptations. But even 60 million years ago, the researchers say, Kumimanu biceae was clearly a diver, not a flyer.

“What would be interesting is to find a flying ancestor of penguins, and we hope that such a find will be made in the foreseeable future.” Mayr wrote in an email. “That would certainly be THE missing link in penguin evolution!”

But as scientists try to figure out how and why penguins turned into the adorable waddlers they are today, one wonders what life would be like had bigger bird prevailed. We may have been slightly more intimidated, to be sure, but Mayr thinks we could hold our own against a march of the massive penguins. They ate meat, but they were clearly adapted to hunt in the water.

“I don’t think this penguin would have been dangerous to a human,” he said. “But it may have been less cute.”