Immense globs of slime are only their second line of defense. 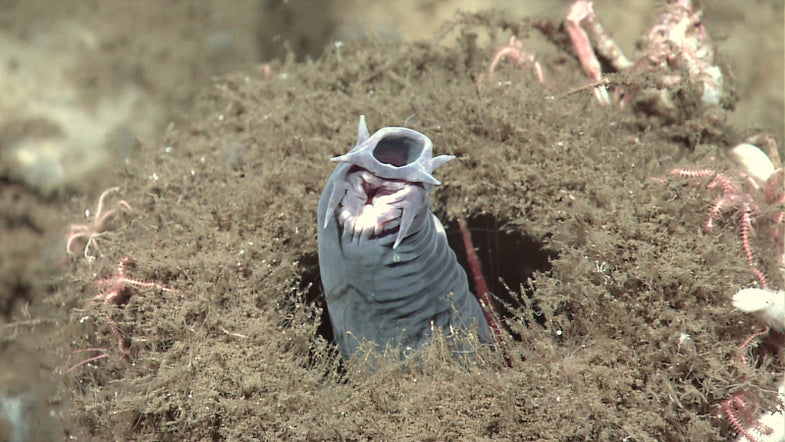 What’s like a loose, slippery, yet surprisingly tough old sock? You guessed it: hagfish skin. These eel-like sea monsters are arguably some of the grossest creatures alive, and are best known for producing vast quantities of thick mucus when attacked. Scientists always thought they used that goo to escape being eaten, but a new study suggests that it’s more about the way their skin (or, more specifically, their skin sacks) can squish out of the way of predators’ teeth.

Mucus seems like a great way to keep someone from chomping down on you. If your predator’s breathing apparatus is suddenly clogged with slime, they’re liable to stop worrying about dinner and start finding ways to clear the gunk from their gills. But there’s something of a timeline issue with this theory, as hagfish only secrete their goo after they’ve been attacked. It does help them escape, but they have to survive a shark bite first.

It turns out their skin is the key to escaping that first round unscathed. To figure this out, biologists at several universities collaborated to make a shark-tooth guillotine, the details of which they published alongside their results in Journal of the Royal Society Interface. Not many animals will even try to attack a hagfish, and mako sharks are some of the proud few, so the researchers gathered mako teeth and glued them to the edge of a metal plate. This plate could be pulled back into the top of the guillotine, compressing a spring as it went, such that it shot down when released. Your bog-standard dropping guillotine wasn’t going to provide enough force to mimic a real shark attack, but the spring-loaded mechanism did the trick.

Once they had assembled their death machine, the biologists got a bunch of Pacific and Atlantic hagfish. And since a live hagfish would never consent to sitting still under a teeth-laden guillotine, they were euthanized first. Sorry, hagfish lovers. When the hagfish were unaltered, the shark teeth punctured skin almost every time—but the muscle underneath didn’t get damaged even once. So it seemed like hagfish skin, once thought to be bite-resistant, wasn’t especially tough after all. But skin is much easier to heal than muscle, you can’t expect to come out of an encounter with a shark totally unscathed.

To see whether it was flaccidity of the skin that protected the hagfish, the biologists did a little crafting. For some trials, they cut out a tube of skin from a skinny part of the body and moved it to a wider area, such that the skin was tight against the underlying muscle. For other trials, they reached under the skin and glued it to the muscle. Hagfish don’t have attached skin the way, well, almost all animals do. They have something more like a skin sack, which is filled with slightly less than a third of their total blood volume. The skin only attaches to the body along center ridge of their backs and at the slime glands.

In both of those experiments, tighter or attached skin caused the muscle to be punctured 85-92 percent of the time. That suggests that it’s the fact that the skin is so loose that allows hagfish to wiggle away from hungry sharks. The teeth essentially slide along with the skin, such that they can’t apply enough pressure to the body to bite all the way through. At least, not before they’re slimed.

Having a blood-filled sack on the outside of your body might not seem like a great survival tactic, but hagfish don’t have high-pressure vascular systems. They have multiple hearts and low-pressure blood vessels that make the internal pressure just barely higher than the external water pressure. Hagfish do lose blood after they’re attacked, but based on observations by divers, they still seem to swim away just fine.

Not that flaccid skin is the only trick in their book. The mucus helps, but maybe the cleverest escape method is to tie themselves in an overhand knot, and then slide the knot through their whole bodies such that anything holding them is forced to let go. They’re so good at surviving that they’ve been almost exactly the same for about 300 million years now. Hagfish are truly the slime-covered Harry Houdinis of the ocean—and we salute them.