Humans may be scaring narwhals to death

A sluggish heart rate and frantic swimming could be a dangerous combination. 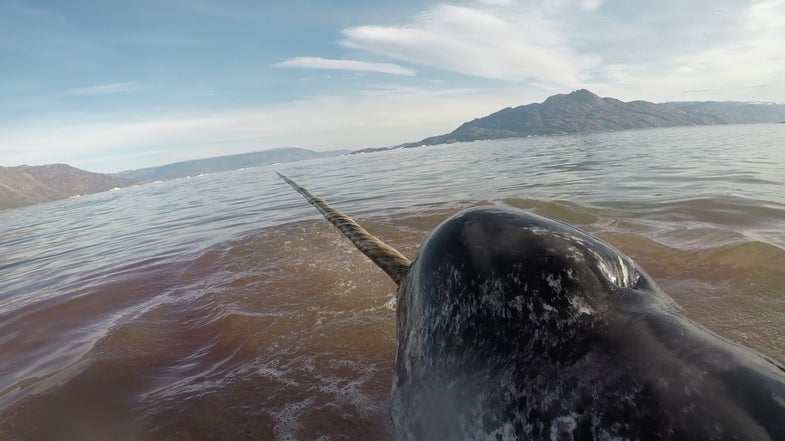 Until recently, narwhals have led pretty secluded lives in the Arctic. But the sea ice that has kept these tusked whales isolated from people is beginning to melt, likely bringing a boom in shipping and seismic exploration for oil and natural gas to the area.

Unfortunately, narwhals may not be equipped to handle such close encounters with humans. When these whales face hazards they aren’t used to, their bodies react in a troubling way, researchers reported today in Science. After being freed from nets or stranding, narwhals’ heart rates plummet while they also swim frantically to escape. This likely is hard on their hearts, and could deprive their brains of oxygen.

“They’re sensitive animals,” says coauthor Terrie Williams, an ecophysiologist at the University of California, Santa Cruz. “When it’s an unanticipated threat, I think that they just pull out all the stops.”

She and her colleagues rescued nine distressed narwhals in Greenland and fitted them with several recording devices. As the whales swam away, the team measured their heart rate, depth, and acceleration. This revealed how quickly and intensely the animals were paddling.

When mammals swim into cold water, their heart rate naturally slows as part of the dive reflex that helps them hold their breath as long as possible. But in the narwhals Williams studied, this drop was extreme. Their heart rates plunged from 60 beats per minute on the water’s surface to a mere three or four beats per minute, and sometimes stayed that way for 10 minutes. Meanwhile, the whales were stroking fast as they could to get away. The scientists calculated that these escape dives gobbled up 97 percent of their oxygen supplies. “The animals are just about maxing out what they have available to them,” Williams says.

This isn’t how they usually respond to danger. When narwhals detect killer whales on the hunt, they sink deeper below the ice sheets. “They move fairly slowly, they’re not like a high-speed orca,” Williams says. “But they can out-dive a killer whale because of their oxygen stores.”

But when tangled up in nets or handled by people, they seem to become overwhelmed. “It’s something they haven’t encountered, and they just want to get away as quickly as they can,” Williams says. These animals aren’t built for a speedy fight-or-flight response. It’s concerning that the narwhals are swimming so forcefully while they are pausing their hearts for 15 to 20 seconds at a time.

“That’s a long period of time for not being able to move blood to the brain,” Williams says. “All of these things that the cardiovascular system should be doing are being put on pause here while the animal is in this escape kind of mode.” These jobs include shuttling oxygen to the brain and moving nitrogen and heat around the body to prevent decompression sickness and overheating.

It could be dangerous for narwhals to hold their breath for so long while frightened and fleeing, experiments in other animals suggest. When scared rats are forced to swim, they sometimes go into cardiac arrest and die. “It’s a combination of stress and a dive response and an exercise response that sends so many opposing signals to the heart that, for rats, it becomes lethal,” Williams says.

Narwhals may not be the only whales to suffer when they try to dive and escape at the same time. When rescued from stranding, it’s common for whales to be disoriented. “You have to wonder if there’s something cognitively that’s gone wrong, and whether this kind of conflicting response is associated with that,” Williams says.

However, narwhals might be especially vulnerable because they are so unaccustomed to people. Williams and her colleagues worry that this will only become more of a problem as the seas get louder. They are now examining narwhals’ heart rates in noisy areas, as well as the toll the response takes on their bodies—and whether it can be deadly.