This new, duck-like dinosaur is so wacky scientists thought it was fake

It's basically a killer swan with flippers, and we're absolutely in love with the idea. 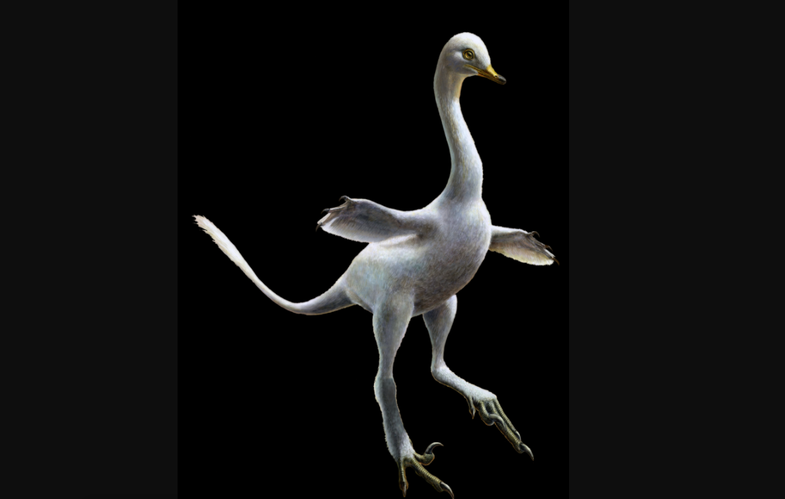 When European scientists encountered their first platypus skeleton, they thought the duck-billed mammal must surely be a fake. “It naturally excites the idea of some deceptive preparation by artificial means,” English zoologist George Shaw wrote in 1799. The specimen looked like a bad attempt at a fake new species, destined for a low-budget freakshow collection.

Modern researchers are a bit more open minded, but it seems they had a similar reaction to the newly-discovered Halszkaraptor escuilliei.

“It was so strange that we suspected that it might have been a chimera—a mix of different skeletons glued together. It wouldn’t be the first time,” The University of Bologna’s Andrea Cau told The Atlantic.

Why the skepticism? Well, as is the case with many fossils, the researchers who studied it didn’t get to unearth the bones from the Gobi Desert themselves. Instead, the creature flitted about the black market for years before finding its way to an expert for examination.

“Illicit fossil trade presents a great challenge to modern palaeontology and accounts for a dramatic loss of Mongolian scientific heritage,” Pascal Godefroit of the Royal Belgian Institute of Natural Sciences in Brussels said in a statement. If and when these stolen specimens finally get some academic attention, they’re often difficult to classify because of uncertainty about their location of origin, and a lack of care taken to preserve important structures during excavation and transport.

Then there’s the fact that Halszkaraptor escuilliei basically looks like a Velociraptor with the neck of a swan. Oh, and flippers. It has flippers.

But this 75-million-year-old dino duck was very real, as Cau and his colleagues reported this week in the journal Nature. They used synchrotron multi-resolution X-ray microtomography to peer into the stone still surrounding much of the the fossil and pieced together a high-res image of the bones. The data helped rule out the possibility of a paleontological cut-and-paste job, and the paleontologists believe the odd duck’s features point to an amphibious lifestyle.

That would be unusual for a therapod, the group of carnivorous dinosaurs that includes the ancestors of modern birds (and this fossil). It’s generally thought that marine reptiles—like the mosasaur in Jurassic World—ruled the water as dinosaurs dominated the land.

According to the researchers, their X-ray scans suggest that while on land, the dinosaur walked like a duck (the jury is out on whether it also quacked like a duck, though other studies have suggested that bird-like dinosaurs likely sounded like birds). In the water, it may have used its flippers to swim, and its long neck to ambush prey.

Anyone who had a scary childhood encounter with a swan or goose at the park will be horrified to imagine this carnivorous, hook-clawed, crocodile-toothed version of their recurring nightmare. Of course, none of us will ever be so lucky (or unlucky) as to see these majestically ugly duckling in person, so it’s hard to be 100 percent certain that it existed.

“I’m very excited about this fossil, but I think it raises more questions than it answers,” Steve Brusatte, a paleontologist at the University of Edinburgh who wasn’t involved in the new study, told Live Science. He’s not convinced that the evidence supports a semi-aquatic existence for this predator, or even that the fossil is absolutely, certainly not a fake. “We’ll probably be debating about it for years.”

Assuming that Halszkaraptor escuilliei isn’t an extremely well-constructed hoax—or a run-of-the-mill land lubber that just happens to have some fishy features—the dinosaur goes to show just how little we know about the creatures that once roamed our planet. We can only wonder what other strange beasts are yet to be discovered.