2017’s natural disasters are going to cost us

Hundreds of billions of dollars, to be precise. 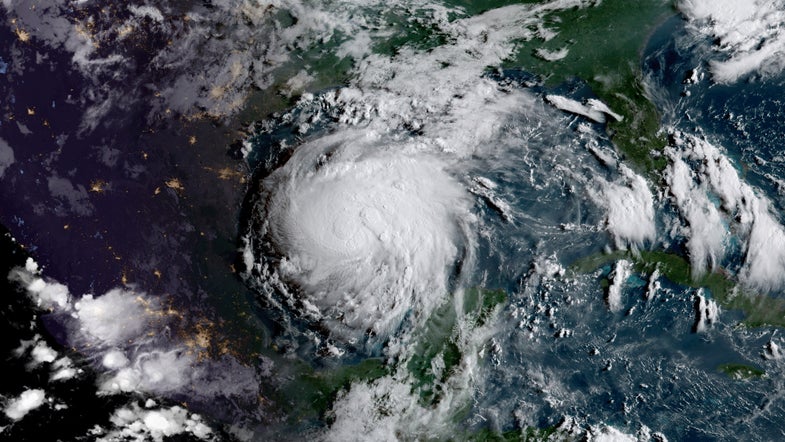 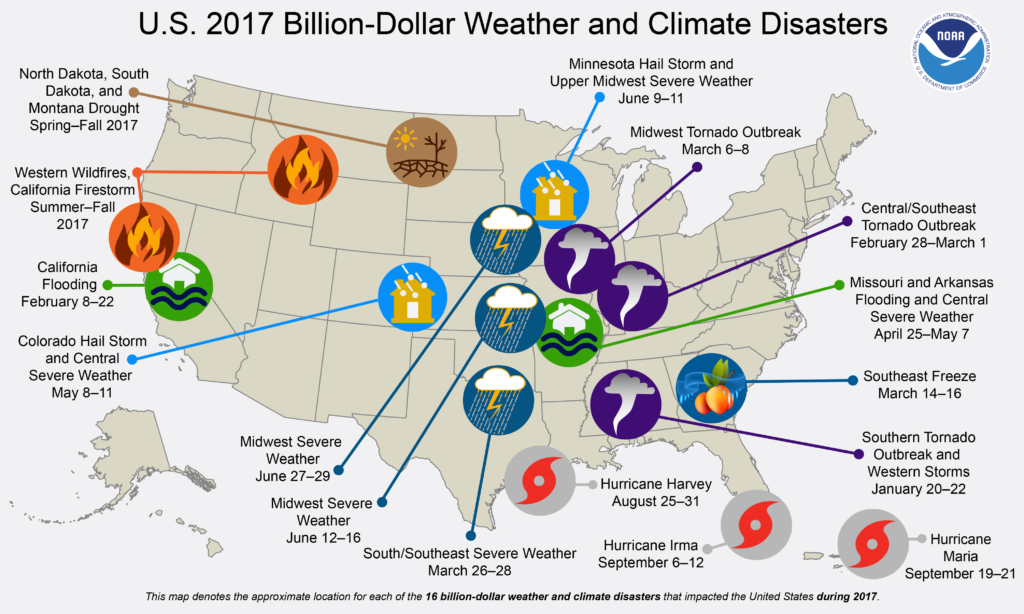 2017 broke records for the number of extreme weather events that occurred, and the damages that resulted.

It often felt like 2017 was just a serious of epic disasters, and now we have empirical proof. 2017 was a historic year for weather and climate hazards, according to a report from the National Oceanic and Atmospheric Administration, with 16 severe weather events that each cost more than a billion dollars.

2017 now ties with 2011 for the highest-ever frequency of these costly weather events. And the cumulative $306 billion in damages in 2017 beat the previous record, set in 2005 when Hurricane Katrina deluged New Orleans and the Louisiana coast, by more than $90 billion.

Three major hurricanes racked up most of the year’s $300 billion tab: Hurricanes Harvey, Irma, and Maria. Harvey, which slammed into the Gulf Coast near Houston at the end of August, was the costliest of the three. The storm grew so humid and large that its flood waters acted like a tiny ocean, continuously feeding the storm with more precipitation. As a result, 30,000 people were displaced and $125 billion in damages occured, according to NOAA. Barely two weeks later, Hurricane Irma wreaked $50 billion in damages when it hit the coast of Florida.

Hurricane Maria, which devastated the infrastructure of Puerto Rico when it made landfall in September, caused an estimated $90 billion in damages and its effects are still being felt on the island. Nearly half of the island still didn’t have electricity at the end of December, and the New York Times reports that full capacity may not be restored until the spring.

But what about the other 13 disasters on NOAA’s list? While hurricanes and events like the wildfires are hard to miss, Adnan Akyuz, North Dakota’s state climatologist, calls the drought that has lingered over the Northern Plains a “creeping disaster.”

“We have a good handle of how to recognize hurricanes,” he says. “It starts as a depression, a low-pressure center in the ocean, and we can track it with satellites and measurements. But we don’t have such systems for droughts.”

In North Dakota, the state’s worst drought in a decade started last March, immediately following an unusually wet six-month period. If this sounds like a paradox, it is—and that’s partly why droughts can creep in unnoticed. The previous wet periods meant that soils were moist and ideal for farming conditions. Although precipitation was infrequent, that moisture lasted well into the spring. “We didn’t notice that March was drier than normal, April was drier than normal, May was drier than normal,” Akyuz says. “We noticed that it was getting really dry in May, when the sun came up and hit the ground and it evaporated any leftover moisture in the soil pretty fast.”

“How long you wait before you name a drought is not an exact science. It depends on many things,” Akyuz says, such as expected rainfall, or the difference between needed and available water resources, or groundwater levels. That can make preparing for droughts—and dealing with the disasters as they unfold—more difficult. As a result, many small farmers lost crops and hay for livestock, bringing the impact of the drought to a total of $2.5 billion dollars.

“It’s not as easy as responding to a much shorter-term disaster such as a tornado or hurricane,” says Akyuz, and predicting when the drought will be over is also imprecise. “Last year, we had the comfort of a savings account [before the drought set in],” he explains. The previous six months of precipitation delayed the impacts of the drought, but this year, the savings have literally and metaphorically dried up.

Many of the disasters in NOAA’s report can be linked to climate change, with varying degrees of precision. “You have to go on a case-by-case basis,” cautions Andrew Dessler, a professor of atmospheric sciences at Texas A&M University, although “with hurricanes, there’s a general consensus that some effects are 100 percent impacted by climate change, like storm surge because of increased sea levels.”

While a storm like Harvey or the California wildfires likely would have been bad regardless, Dessler likens the impact of climate change to steroids. “Maybe the batter does hit the ball, but you give him steroids, and it’s a home run. That’s essentially what we’ve done—these storms are on steroids.”

But other billion-dollar disasters can be chalked up to weather as normal. The state of Colorado experienced its worst hail storm in recorded history, with baseball-sized hail causing more than $2 billion in property damages. “Some of it can probably be attributed to bad luck,” says Russ Schumacher, the state’s climatologist. “This particular storm hit just west of Denver, in the metro area, so it happened to hit a place where a lot of people live, where there are a lot of things for the hail to impact.” Essentially, as more people move into dense urban areas, property damage to cars and roofs in that area will likely go up—even if storms don’t take them by surprise. The 2017 storms, for example, occurred in May, during a season when hail is not uncommon in the region.

“In terms of what influence climate change might have on these storms, or what we might expect to see in terms of frequency, we don’t really have a good answer to that,” Schumacher says.

In North Dakota, the answer seems pretty clear. Snowfall and rainfall have already been below average, and warmer temperatures mean drier soil and moisture conditions on the ground. If the precipitation rates don’t pick up, according to Akyuz, the 2017 drought will likely run over into 2018. “We are coming into spring as vulnerable as we can get.”

A previous version of this article stated that the hail storms in Colorado occurred in July, when in fact they occurred in May. We regret the error.