This year’s Super Bowl stadium is an avian death trap

It kills more birds than any other building in Minneapolis. 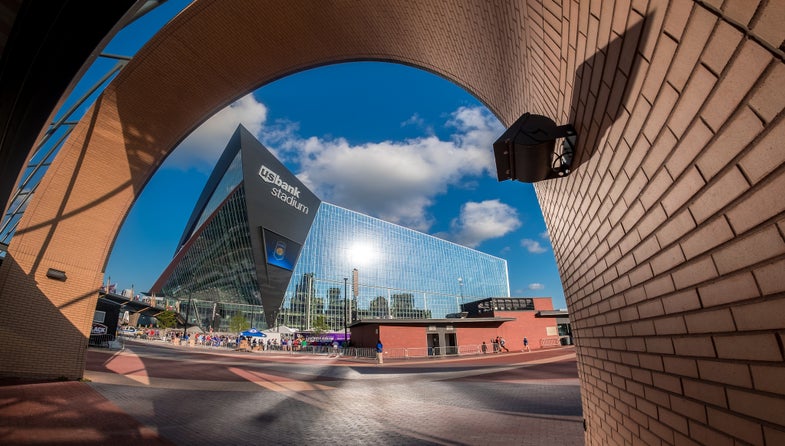 U.S. Bank Stadium, home to Super Bowl 52, is very, very big, and very, very reflective. Its glass—200,000 square feet of it—mirrors perfectly crisp vistas of the Minneapolis skyline. It does it so convincingly that migrating birds often barrel into the glass at full speed and fall to the ground, dead.

In fact, the stadium is the deadliest building in Minneapolis according to a report released last year. That report, prepared primarily by the Audubon Chapter of Minneapolis, found that 60 birds died and 14 were stunned after crashing into the stadium glass in just one fall migratory season. That would add up to 360 stadium-killed birds in three years. (The runner-up for Minneapolis’s deadliest building picked off an average of 42 birds per season, according to a previous study.)

Even with that dangerous reputation, Audubon’s Minneapolis chapter thinks they’re drastically underestimating how many birds die at the hand of U.S. Bank Stadium. Volunteers surveyed the grounds from mid-August through early November, but weren’t allowed inside every single day. They also lacked access to the roof ledges and upper patio, and couldn’t account for any fallen birds disposed of by maintenance staff or hungry scavengers. So in actuality, 60 avian deaths is probably an understatement.

Of course, any building featuring a large piece of glass can be problematic for our feathered friends. But what is it about this year’s Super Bowl locale that causes so many birds to meet their makers?

It’s a perfect storm of size, reflectivity, and location, according to Christine Sheppard, an ornithologist and Director of the Glass Collisions Program at the American Bird Conservancy.

First, the stadium has a wild surface area covered by glass: 200,000 square feet is bigger than four and a half NFL football fields. And it’s not just any old glass—it was created specifically to act like a mirror, because architects wanted to see the city of Minneapolis sharply on the stadium’s surface. That’s a big problem for little bird brains.

“Birds don’t understand glass,” Sheppard says. “Even people think they can see glass, and they can’t. They run into glass all the time.” (She’s right.) Like humans, birds will sometimes think transparent glass simply isn’t there, and try to get to what’s on the other side. But with reflective glass, they’ll fly toward what’s being reflected, whether that’s blue sky or trees that could hide a resting place or a food source.

U.S. Bank Stadium reflects both of those things, which makes it especially dangerous; birds don’t really care about getting a front-row seat to the Super Bowl, but they’re infinitely more likely to seek out a spot in a lush tree or zip toward a patch of open sky. And when they go for those sweet spots at full speed, it’s often the last thing they do.

To complete this avian-death trifecta, the stadium sits in the Mississippi Flyway, a migration route for over 300 bird species spanning from Canada to the Gulf of Mexico and South America. The stadium is also located less than a mile from the Mississippi River, which is “a huge attractor for migrating birds,” Sheppard says. “They’ve gotta eat, and at the edges of rivers and lakes is where you find a lot of food.”

Aside from the fact that it’s a bummer to see so many dead birds, the animals are an important part of basically every ecosystem out there. They eat insects that would otherwise destroy crops and forests, along with others that could give you West Nile virus or malaria. Even owls, who are occasionally glass collision victims, do some superb work controlling rodent populations.

But there is a solution: bird-safe glass. “You can put patterns on glass and birds will see them,” Sheppard says. “If they have dimensions that birds don’t think they can fly through, they’ll interpret it as a barrier.” Typically, bird-safe glass follows the two-by-four rule; if the pattern has polka dots, for example, each dot has to be no more than two inches apart horizontally and four inches apart vertically. Any bigger, and birds start to think they’ll be able to squeeze through.

Developers can apply bird-safe patterns to large swaths of glass using silk-screening, fritting, or an ultraviolet coating. When New York City’s Javits Center installed fritted glass panels in place of older, highly reflective ones, bird collisions decreased by 90 percent. And according to Audubon, bird-safe glass can cost as little as 5 percent more than regular glass.

The Audubon Chapter of Minneapolis initially pushed for bird-safe glass on the stadium, according to chapter president Jerry Bahls. Bahls says it would have cost an extra $1 million to make the stadium glass safe for birds at the time—a fraction of the $1 billion total price tag—but the Minnesota Vikings and Minnesota Sports Facilities Authority ultimately decided against using it to forgo extending the project and spending more money on labor. Bahls says it would now take around $10 million to retrofit the stadium, which could help quell the estimated hundreds of millions of birds dying via glass collision in the United States each year.

To further examine the situation at U.S. Bank Stadium, Audubon, the Vikings, and the Minnesota Sports Facilities Authority are collaborating on another, more thorough study. It began in spring of 2017 and will continue through fall of 2018. With more comprehensive data on how many birds die after crashing into the stadium, and in which areas, Bahls hopes to make a better case for bird-safe glass.

“To me, one death is too many,” says Lori Naumann, a wildlife specialist with the Minnesota Department of Natural Resources. Naumann says migrating birds face a lot of obstacles on their journey, including cats, moldy bird seed, and habitat loss. “I’d rather not see any deaths when it’s completely preventable.”