Meet the birds that work as wingmen for other males

Welcome to the strange world of cooperative courtship. 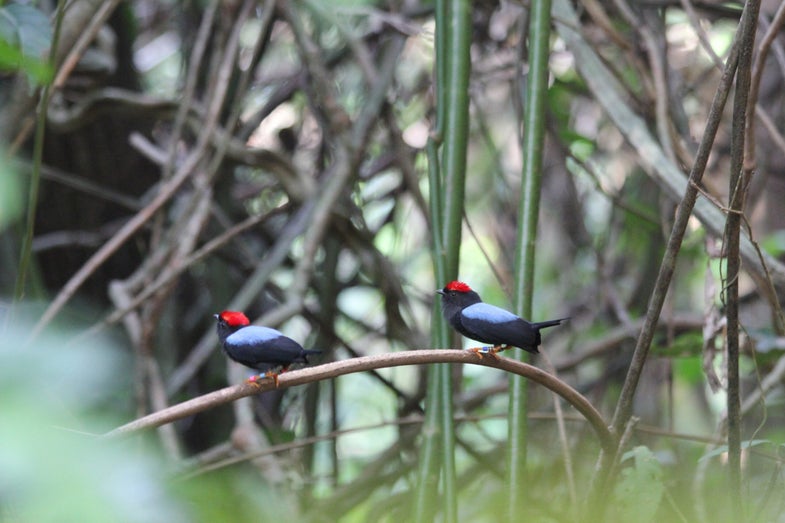 It starts with a song. The two birds will sit on the same branch, about 4 inches apart, and perform a carefully coordinated duet. Both are male lance-tailed manakins, a small bird found in the forests of Central and South America. Then, if a lady bird alights on their perch, the duo launches into the main event: a dance that begins with one male leaping into the air and flying backwards over his partner, who springs forward at the same time.

“They form this sort of backwards leapfrog display where they have to be really tightly synchronized or they run into each other,” says Emily DuVal, a behavioral ecologist at Florida State University in Tallahassee. The dance can include up to 11 different moves. Eventually, the less socially dominant male in the pair will fly away, while his partner continues with a solo performance. Then he will bow and—if the female invites him—finally make his move.

The lance-tailed manakin is one of a few animals for which sex is not all about competition. They participate in a rare reproductive strategy called cooperative courtship where males work together to attract females or convince them to mate.

“It’s a weird thing to do and yet it’s spread across the animal kingdom,” DuVal says. This can take the form of “unpleasant multi-male harassment.” Some bottlenose dolphins form alliances so they can herd females or steal them from other gangs, while coalitions of lions join together to defeat rival males and take over their prides. In other cases, cooperation helps males show off more effectively by creating elaborate displays to catch a female’s attention.

For the manakins, these partnerships can last up to six years. Time and again, the subordinate, or beta, male will bow out so his alpha can get laid. DuVal has been spying on the manakins for years to understand these intense relationships and when it pays to be somebody else’s wingman.

So, why partner up? In some animals, cooperating males are close relatives. Wild turkeys that display to females in pairs tend to be brothers. Even though the subordinate brother doesn’t get to mate, some of his genes will still be passed on. Not so for the manakins; DuVal has found that the males in a given pair are no more closely related than any two random birds in the population.

“I considered the possibility that maybe the females are flying off into the bushes and mating with the betas when we’re not looking,” she says. So she started giving manakin chicks paternity tests—and discovered that an alpha male was nearly always the father. “Every once in a while a beta does sneak in a copulation, but it’s so rare that it just wouldn’t be a good option to pass on your genes.”

But the betas are getting something out of the arrangement. It turns out that a beta is more likely to become an alpha in future than a male who displays alone. By paying their dues as betas, the birds increase their chances of one day getting to breed.

At first, DuVal and her colleagues thought that the betas might be promoted when their partner dies. “It makes a lot of sense that these males might be waiting in line,” she says. “Then they inherit this great spot.” But beta manakins don’t always take over their partner’s territory. Sometimes birds that have served as betas for years will find a completely new site and start displaying as alphas. “So what is it about being beta that helps them become alpha? I’m honestly still not sure,” DuVal says.

This is especially puzzling given that some alphas didn’t even bother to serve as betas first. “They just skip the whole thing and go straight to alpha status,” DuVal says. These birds do just as well with the ladies as males that spent up to six years helping somebody else before becoming alphas. However, they also tend to have shorter lifespans.

“We don’t yet know whether that’s because it’s dangerous to be an alpha and so they’re just exposing themselves to risk early on in life,” DuVal says. So this could be a live fast, die young situation. But it’s also possible that there are underlying physiological differences that make some males short-lived, which means they don’t have time to invest in serving under an alpha.

Once a bird moves up in the ranks, he can find a dance partner. For the alphas, the advantage seems obvious. If females are drawn to more elaborate, multi-male displays, having a beta should give him a better shot at mating. However, there is a twist. A male lance-tailed manakin will sometimes display without his normal partner—and have more success at wooing females.

It could be that a female needs to see males display as a pair first, then returns later with her decision already made. In fact, females may call on the same male between six and 25 times before deciding to mate. “They don’t just go on one date,” DuVal says.

She’s started to wonder if cooperation is really just about attracting a female, though. Birds in these alliances will defend the breeding territory together against other males. If an intruder cuts in while the pair is displaying, the beta will break off and chase him away. “Just because she’s watching doesn’t mean it’s all about her,” DuVal says.

The lance-tailed manakin has plenty of relatives that also put on intricate shows for females. Some of these performances take teamwork to the next level; the blue manakin dances in troupes of up to six males at once.

Other manakins practice looser agreements that might offer clues about how cooperative courtship evolved. White-ruffed manakins will take turns displaying when a female drops by, although it’s likely the more dominant bird will get to mate. In other cases, several manakins will display for their peers in what seems to be a practice run before the females arrive. And some manakins will gather in leks, or arenas where many male animals can strut their stuff at once. This lets females compare prospective mates.

Groups of up to 30 white-bearded manakins have been known to congregate in a space about the size of a conference room, DuVal says. “They’re just a few feet apart from each other and they’re making these loud snapping, jumping displays and when a female comes into that area they all just go nuts at the same time.”

Though each male performs independently, being in a group can come in handy; assembling en masse and making a lot of noise means the males are easier to find.

Certain bats may profit from a similar strategy. In the forests of New Zealand, male lesser short-tailed bats stake out small tree hollows and sing late into the night to lure females. Some males sing alone, but others form timeshares—roosts where several males take turns singing in a given night.

Timeshares are most often occupied by large males, which don’t vocalize as much as their smaller peers, says Cory Toth, a biologist at Boise State University in Idaho. Bigger bats might have to work harder to fly and forage, leaving them with less energy to sing. “It appears as though if a larger male were to go one-on-one against a smaller male in terms of courtship output, he’d lose,” Toth said in an email.

He and his colleagues have tagged more than 700 bats with microchips, sampled their DNA, and set up video cameras outside singing roosts. Over time, bulky males seemed to be as successful at passing on their genes as their smaller peers. The team also found that smaller males individually spent more time in their bachelor pads than larger males did, but communal roosts were occupied for longer each night. This means that timeshares may ultimately attract more females.

“Females will hear more songs coming out of a singing roost if males trade off their singing duties, which may entice them to visit,” Toth says. “If multiple males weren’t singing from that roost, then there’s a greater chance that the roost would be silent when the females pass.”

This means that timeshares could be a form of cooperation among large males that would otherwise be unable to compete with smaller, solitary bats. These roosts are often occupied by males that are unrelated or only distantly related to each other. “We know bats, in general, are very social, and cooperation by unrelated individuals is not uncommon,” Toth says.

Bats that have joined a timeshare don’t appear to compete with their fellow members. None of the bats gained entry to their roost by kicking another male out. Timeshares also seem to be populated by the same group of males each night. In fact, two of the roosts the researchers are watching have retained the same membership over several years. That indicates that timeshares, like teams of lance-tailed manakins, are relatively stable relationships.

Cooperative courtship is not all sunshine and roses. The birds DuVal studies sometimes squabble or undermine each other. “It often looks like such a polished, easy interaction where everybody knows exactly what they’re doing and it just goes like clockwork,” she says. “There have been some pairs where that’s not the case and the partners are clearly in conflict.”

One such pair had worked together for three years before they started fighting in earnest. “The beta would literally turn to his alpha and knock him off the perch,” DuVal says. “Then they would chase through the undergrowth and nearly hit us in the head.” Afterwards, the alpha would be left panting in exhaustion. “This went on for a month, and then the alpha disappeared and was never seen again and the beta took over,” DuVal says.

On another occasion, she captured an alpha to take a blood sample—and his partner took advantage of the situation to quickly mate with a female. “That was a good indicator that there was some tension in that pair,” she says. “So it’s not necessarily happy alliances always.”

To probe the relationship between male manakins, DuVal is running an experiment that gives them some time apart. By catching betas and keeping them in a cage for 10 days, she hopes to find out if alphas will immediately forge a new alliance with another bird. In one case, an alpha chased away other males that approached him, then got back together with the beta upon his release.

This suggests that certain males are better suited to go courting together than others. “These males…spend a lot of time singing and broadcasting these songs together, they display for females together and are kind of that well-oiled team,” DuVal says.

So perhaps cooperative courtship isn’t for every male. But when it works, the alliances are impressive to behold.