The march of the penguins has a new star: an autonomous robot

ECHO is watching over Emperor penguins in a long-term effort to assess the health of Antarctica's ecosystems. 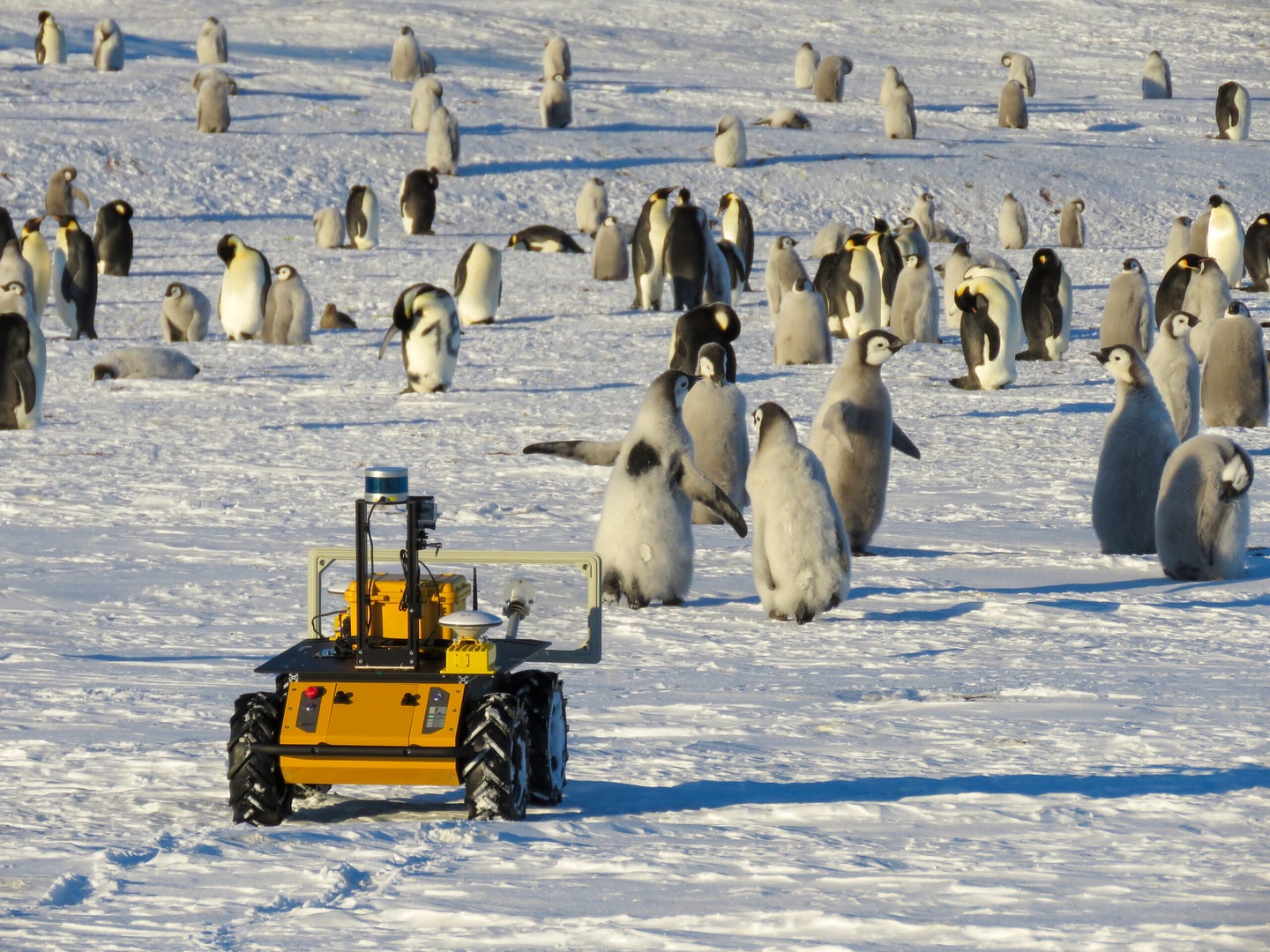 In Atka Bay in Antarctica, hundreds of Emperor penguins pack together in a huddle on the vast gleaming sheet of frozen ocean. While they keep warm in the frigid icescape, a yellow cart-like robot slowly and quietly approaches the colony of regal birds. A four-wheeled bot isn’t something a penguin would typically encounter in the barren environment. But measuring only 3 feet long and about eye level with the adult penguins, the robotic vehicle doesn’t seem to startle them—even as it drives just a few feet away.

The penguin-friendly bot is named ECHO, an autonomous, remote-controlled ground vehicle created by the Marine Animal Remote Sensing Lab at Woods Hole Oceanographic Institution in Massachusetts. ECHO is part of a larger international, multidisciplinary research effort called MARE, which monitors the impact of human-induced change on the Southern Ocean.

“We all know that the world is changing, and that change will have dramatic effects on biodiversity and on ecosystems, especially in very remote areas, like Antarctica,” says Daniel P. Zitterbart, principal investigator of the Marine Animal Remote Sensing Lab. Some experts have predicted that Emperor penguins could be nearing extinction within about 100 years, he says. “To understand if that’s true or not, we need to start monitoring those systems very closely now.”

Over 30 years, MARE will assess the vulnerability of Antarctic ecosystems by following population dynamics of Emperor penguins. These birds are an iconic animal of Antarctica, but “​​in contrast to what people think, the Emperor penguin is a species very poorly studied,” says Céline Le Bohec, a researcher at the Institut Pluridisciplinaire Hubert Curien and the Centre Scientifique de Monaco, who is a research partner and ecologist on MARE. “So any data, especially from the sea, is exciting and precious.”

The team is using the Emperor penguin as a sentinel species of the Southern Ocean, because it is an important top predator in the food chain. In the Southern Ocean, there are fewer layers, or trophic levels, in the food web than other parts of the world—so any change to species at the bottom of the food chain will have major impacts to those at the top. Studying how an upper-level predator like the Emperor penguin is coping with climate change can tell scientists about the health of the entire Southern Ocean ecosystem, explains Le Bohec.

[Related: Most male Emperor penguins fast for 115 days—but a few of them may sneak snacks]

“Another advantage of top predators, like Emperor penguins, is that they are far-ranging species, which implies that the protection of their vast habitat would benefit many ecological structures and species,” she says. “Those umbrella species are also precious tools for conservation management policy.”

The MARE team is trying to gather information with minimum disturbance to the birds and the colony. But, currently, the researchers have to physically capture and tag the birds on their backs. The tags are a Passive Integrated Transponder (PIT) and Radio-Frequency Identification (RFID) system—which works the same way as the microID chips in pet dogs. The only way to retrieve the data from those tags is by getting close enough to the birds to rescan the device, says Zitterbart.

While the colony at Atka Bay is conveniently about five miles from the German Antarctic station, it’s still easy to miss the penguins out in the field, he says. Even if the researchers know the approximate time in the season penguins will be at the Atka Bay site, they might be out at sea foraging for days or weeks. Plus, the huge expanse and harsh, unpredictable weather conditions make the Southern Ocean a challenging environment for human exploration and study.

That’s why Zitterbart’s team relies on remote sensing technologies that don’t require researchers to physically be in the field. While satellites can survey sea surface temperatures, wind, ice cover, and other physical parameters, they are not as good at monitoring food chains and species dynamics in ecosystems. Instead, the MARE researchers use camera systems, land antennas, and autonomous vehicles, like ECHO.

Researchers can easily tell ECHO, which is both remote-controlled and autonomous, to drive in a specific path around the colony. The vehicle is equipped with several tools, including LIDAR and a 360-degree camera, which can detect penguins in the wide white terrain. The robot also has an antenna—a rectangular panel positioned like a bulldozer’s front bucket. The antenna sends out a pulse that activates the other antenna attached to the penguin’s tag, which identifies the animal.

“As a human, you cannot walk around and try to scan 15,000 or 24,000 penguins each year, it’s impossible,” says Zitterbart. “The amount of data we can gather through ECHO is something we would never be able to achieve with any other method in this place.”

While ECHO has only been trudging through the landscape for a year, so far it seems like the penguins aren’t afraid when it sidles up to the colony. In fact, past studies have also indicated that some animals might be less reactive to robots than humans, says Zitterbart.

“The really cool thing is if I as a human would try to get as close as ECHO, they would be running away,” Zitterbart says. “We don’t want to scare the animals. Our general aim is to do more science with less impact. And humans have much bigger impact on the animals than the robot actually has.”

The project is still in its early testing stages and the team is working on improvements, says Zitterbart. ECHO’s battery, for instance, only lasts about a day. There’s also not a great setup to protect ECHO from a sudden snowstorm. Eventually, the MARE team wants ECHO to park inside the Single Penguin Observation and Tracking, or SPOT, a small outpost with cameras and monitors that has been overlooking the Atka Bay colony for about 10 years. SPOT could serve as a kind of garage for ECHO to take shelter in and recharge, Zitterbart says.

In its next phase, the roving robot will provide behavioral and biological information about the Emperor penguins that scientists haven’t been able to collect before, says Le Bohec. It opens up doors to understanding survival and breeding rates, collective activity like huddling for warmth, calls and communication, and hunting strategies at sea. ECHO will also download important GPS data of the birds while they are at sea, which can reveal habitat hotspots.

Governing bodies in charge of conservation issues can learn from the Emperor penguins, whose behavior can help “define and map marine biological ‘hotspots’ and Marine Protected Areas,” Le Bohec says. She adds that all of ECHO’s data will “allow us to evaluate the overall trend and extinction risk of the species, modeling future population trajectories under the warming scenarios forecast for the next decades and century.”