It could be the first of many firsts. 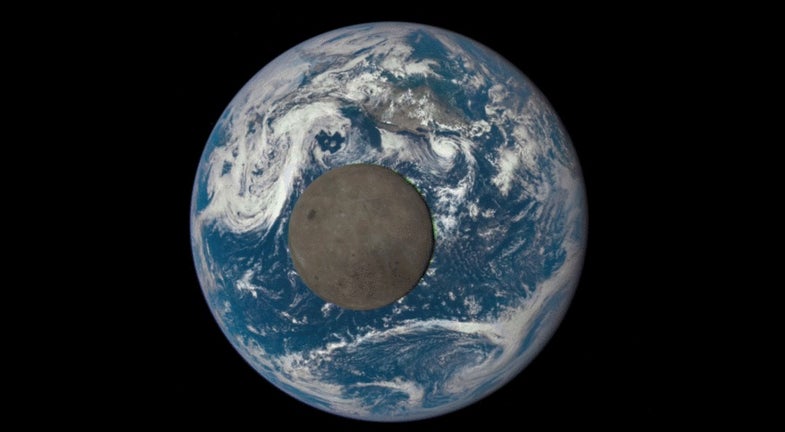 The far side of the moon, illuminated by the sun, as it crosses between the DSCOVR spacecraft's Earth Polychromatic Imaging Camera (EPIC) and telescope, and the Earth—one million miles away. NASA/NOAA
SHARE

NASA’s new initiative to go back to the moon at the behest of President Donald Trump is an intriguing notion, but for now, we’re still relegated to studying and exploring the lunar surface with the help of robots. But it’s not NASA’s robots we ought to be paying attention to—there aren’t any. Instead, China currently has the leg-up in lunar exploration, and it’s poised to make a splash with its Chang’e 4 spacecraft, launched last Saturday. The four-ton lander entered lunar orbit on Wednesday and should touch down on the surface of the moon sometime in January, unloading a brand new rover out into the landscape.

All of that sounds pretty standard for lunar missions, except for one crucial detail that makes all the difference: this will be the first time humans have made a soft landing of a spacecraft on the far side of the moon, a region which we have never explored before.

“As a part of a comprehensive robotic exploration campaign, you want to go to places you haven’t been before,” says John Logsdon, a space policy expert at George Washington University. “Going to the far side [of the moon] is, in a sense, the logical next step in the program. It’s an indication China is serious about having a comprehensive program of space exploration. It’s determined to be one of the leading space-faring countries.”

The fourth formal mission of the Chang’e program and the second robotic rover sent to the moon, Chang’e 4 is part of an extensive and ambitious effort by China to explore the moon like only NASA has before. And in some respects, the Chang’e program aims to to outdo U.S. efforts—hence the reason the latest spacecraft is dropping a rover off on the far side.

Although Pink Floyd has made it popular to think the far side is a world of perpetual blackness, it actually receives about as much sunlight as the side we can see. It’s just that the moon itself blocks the ability of anyone or anything located on the far side to communicate directly with Earth, which is why we’ve hardly attempted to observe it save for few images snapped by orbiters (and a crash landing by NASA’s Ranger 4 probe in 1962, which failed to return any useful scientific data).

The far side isn’t too different from the near side, but there are some physical differences that could shed light on the moon’s origin and history. It is home to much less maria (large basaltic plains formed by ancient volcanic activity which often appear dark) than the near side, as well as more visible craters. The exact reasons why are unknown, but Chang’e 4 will be tasked with analyzing chemical compositions of lunar rocks and soils and using ground-penetrating radar in an effort to find an explanation. The spacecraft is expected to land in the moon’s South Pole-Aiken basin, which is probably home to rocks that are quite different than the ones brought back to Earth during the Apollo program.

Beyond that, Chang’e 4 will also be tasked with measuring lunar surface temperatures, studying cosmic rays, and observing the behavior of coronal mass ejections expelled by the sun toward Earth. The weirdest and most exciting thing is that the lander is also carrying a student experiment—a miniature, protected biosphere home to silkworm eggs as well as potato and mustard seeds. The aim is to grow those lifeforms using natural sunlight, as a way to study respiration and photosynthesis on the moon.

Some of the technologies Chang’e 4 is testing might pave the way to future space exploration in the region and elsewhere. The rugged topography of the South Pole-Aitken basin means China has to attempt a steeper-than-usual landing, so Chang’e 4’s descent will demonstrate some real prowess.

More importantly, China is planning to circumvent the far side’s communications obstacles through Queqiao, a satellite launched earlier this year and placed in an Earth-moon orbital zone called L2. That kind of technology isn’t exactly a stretch of the imagination, but it may be a valuable test for how to establish larger communications efforts not just at the moon, but on other worlds like Mars as well. “The fact that China is beginning to build a lunar communications infrastructure is notable,” says Logsdon.

Like NASA under its current leadership, China certainly has its eye set on sending astronauts to the moon relatively soon. Chang’e 4 is not a direct part of those plans, but there’s no question it is something of a step forward for the country’s ambitions to send taikonauts to the moon in the 2030s timeframe.

“When we start to return humans to the moon, I think the odds are overwhelming that it will be to the side facing the Earth,” Logsdon says. “In the long scheme of things, if humans return to the moon, they’ll want to to go to the whole sphere. The information Chang’e 4 will have gathered will by then be relevant to humans.” Still, he cautions, “that’s relatively far in the future.”

But the mission is nevertheless a reflection of why the U.S. ought to keep close tabs on China if it plans to maintain leadership in lunar spaceflight and exploration. Logsdon says it’s worth noting how the Chinese set out their plans, execute them, and almost never change them in the process—quite the stark contrast to the multiple pivots the U.S. space program can undergo thanks to changes in the White House, who’s leading Congress, how much money members of the government are willing to devote to space activities, and efforts to leverage opportunities opened up by the rise of the commercial sector.

Just a little over two years ago, NASA had absolutely no plans to send humans back to the surface of the moon, and was firmly set on advancing a path Mars. That’s certainly not the case today. China, on the other hand, has never much wavered on its intentions and plans. It’s a safe bet to take them at their word and expect they’ll do as they say.

And that certainly makes sense—it’s a regime that can operate more quickly and efficiently, but without accountability and oversight. For all of the headaches produced by NASA’s recent directive to return us to the moon, at least it’s happening under the direction of leadership that has to answer to the American public. “China doesn’t have to have Congressional appropriations, after all,” says Logsdon. “I think it reflects the authoritarian nature of the society. I don’t think we want to imitate that.”

Still, a soft landing on the far side of the moon will be a first-of-a-kind achievement that may very well lead to more of the same. The pursuits of this mission “have never been done before,” says Logsdon. “More power to China for being willing to try it.”