Yes, this article has spoilers 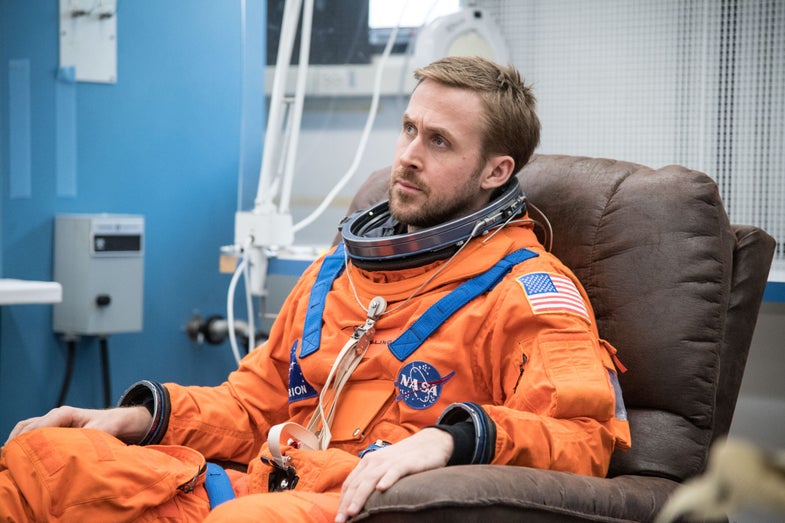 Long before the advent of modern rocketry, filmmakers were enamored with space, dreaming up wild adventures far from Earth’s surface to the delight of audiences around the world. But a number of space films have looked to reality instead of science fiction for their dramatic narratives: 1983’s The Right Stuff, 1995’s Apollo 13, 2016’s Hidden Figures, and last weekend’s First Man, to name a few.

Conjuring the dawn of space exploration decades later can be a challenge, but Hollywood had some help in making those films as accurate as possible. NASA is an archival treasure trove for screenwriters and filmmakers looking to produce a project on its missions. The agency’s Bert Ulrich, Multimedia Liaison, Film and TV Collaborations, is the guy you go to if you’re looking to dig into NASA history. As he is for for many productions about space, Ulrich was instrumental in assisting First Man screenwriter Josh Singer and director Damien Chazelle in telling Armstrong’s story with the utmost accuracy.

As Multimedia Liaison, Ulrich receives proposals from hundreds of writers, producers, and directors each year, and he’s tasked with deciding which films and shows the agency will work with. In 2017 alone, he provided assistance on 143 documentaries, 25 feature films, and 41 TV shows, coordinating interviews, film shoots on NASA property, and archival research. “One of the great legacies of NASA is the assets that we have: the footage and photos and other details in our historical archives,” says Ulrich. One of the scripts he helped shepherd through the system was a draft of First Man by Singer.

Based on the only authorized biography of Armstrong by James R. Hansen, which shares the same title, First Man doesn’t just follow the narrative of the first lunar landing, but takes a long, hard look at Armstrong as an individual man. “Accuracy is just super important to us because we knew it was important to the Armstrong family, and we knew it would’ve been important to Neil,” says Singer. “And also because we think this is a pretty provocative portrait of both Neil and of the program at the time.”

Singer visited NASA headquarters in Washington, D.C. to meet with Ulrich and Chief Historian Bill Barry for advice on the script. “They gave me more books than I can carry,” laughs Singer, who then traveled the country to visit different NASA facilities and interview a number of people who worked either directly with Armstrong or on the missions he served on. “We wanted to make sure that the Armstrong family was on board, too,” notes Ulrich, so he coordinated Singer’s interviews with Janet Armstrong, Neil’s ex-wife; his sons, Mark and Rick; and his sister, June. When the family gave the okay to move forward with the project, believing the portrayal of Armstrong to be accurate, NASA officially signed on as a consultant to the film.

“NASA was incredibly helpful,” says Singer, not only during the writing process (in one case, Singer was able to fly a simulation of Armstrong’s X-15 flight that opens the film in order to write it as realistically as possible, as well as interview the last living X-15 pilot, Joe Engle), but also during filming. “Damien [Chazelle] made an effort to do as much practical shooting as possible,” says Singer. Using NASA’s plans, models—and in some cases, the actual equipment—the crew physically built models of spacecraft, planes, and other machinery for the film. For instance, the scene where the Lunar Landing Research Vehicle malfunctions and nearly kills Armstrong—a true event—was filmed using a model that ejected bursts of steam while being swung around from a crane. The production team also built the multi-axis trainer that spun the astronauts to dizzying speeds. “It probably didn’t work exactly the same as the real one, but it could spin in all three directions, and it was visually an exact replica,” says Singer.

Visuals aside, NASA also was essential in creating the authentic sounds the audience hears throughout the film, providing sound artists with access to Gemini and Apollo spacesuits. “They recorded the zipper going up and down, and they stuck mics inside the helmets to record airflow,” says Singer. The writer also spent time with astronauts going over every detail about the sounds during a launch. “Frank Hughes, when he saw the Gemini lift off for the first time, he said, ‘You know there’s this funny thing with the Titan. When it first pushes off it does this chirp,'” notes Singer. “We didn’t originally have it in there, but we found it and put it in.”

It wasn’t just NASA that helped with the accuracy of the film. The space community at large chipped in. “For our Gemini 8 cockpit, the console was actually built by a hobbyist who had been in love with Gemini since he was a kid,” says Singer. “It’s an exact match.” NASA did step in to help figure out what the purpose of all those buttons on the console, though: Frank Hughes, who trained the Apollo astronauts, was also a Gemini expert, and he sat down with Singer to go through each and every one. Hughes also helped Singer translate the communications recordings, or comms, of each mission. “We can listen to these comms, but being able to actually understand what’s going on is a different thing entirely,” says Singer. “I asked Frank to help me add just a little bit of dialogue to help people understand what’s going on when the comms aren’t transparent.”

Other help came from the general public when the trailers were released. On one occasion, space historians contacted the team to let them know that they had the Gemini 8 thrusters all wrong. “We had to redo that completely with visual effects,” says Singer.

While NASA and the space community at large were essential to determining the accuracy of the practical aspects of the film, it was the Armstrong family and the astronauts that were perhaps the most important key to unlocking Armstrong’s personality. In writing the official biography, Hansen spent hours with the Armstrongs, including Neil himself. “I think Jim [Hansen] gets at Neil in a way no one else has,” says Singer. “He really went pretty deep, and then we went deeper still.”

In the film, Armstrong is portrayed as a reticent man, particularly following the loss of his daughter Karen, who died of cancer when she was two, as well as the deaths of his fellow astronauts throughout his career. “He was not a guy who was gregarious and would come towards you—you had to come towards him,” says Singer. “And, if you did, you’d get to that wry sense of humor and that big smile. But he was tightly packaged emotionally, which is how Jim describes him in the book. His sons said you’d ask him a question, and often times he just wouldn’t answer. And Janet said ‘no’ was a loquacious argument for Neil.”

There is one part of the film that’s not based in fact, but informed conjecture—the moment Armstrong drops his daughter Karen’s bracelet into the Little West Crater on the surface of the moon. In the real-life sequence of events on the moon, Armstrong and Buzz Aldrin went through a carefully choreographed series of movements, save for a brief moment when Armstrong went off script to stand at the edge of the crater. Hansen, after spending years with the Armstrongs, speculated that, perhaps at this moment, the astronaut had left something of Karen’s behind.

As climbers do on Mount Everest, many moon astronauts placed mementos or tokens of loved ones and lost ones at the apex of their journey, so it’s not unreasonable to suspect such an event occurred. It’s not something Armstrong ever confirmed himself—unsurprising, given how private a man he was. “But [Hansen] went directly to June Hoffman, Neil’s sister, who he felt knew Neil just about as well as anyone in the world,” says Singer. “He asked June, ‘Do you think Neil might have left something of Karen’s on the moon?’ And June said, ‘Oh, I dearly hope so.’”

For Singer and Chazelle, First Man is a chance to tell a side of the moon landing story we don’t often hear. “We’re really trying to nudge the history a little bit,” says Singer. “The issue I have with the conventional tellings that have sugarcoated the early years of the space program is that it makes us feel like it was easy. I think achievement is very hard, and achievements of this nature require great sacrifice. The cost to the astronauts, in particular, was a lot bigger than has been depicted in the history books.”