Ask Anything: Why Is The Milky Way A Spiral? 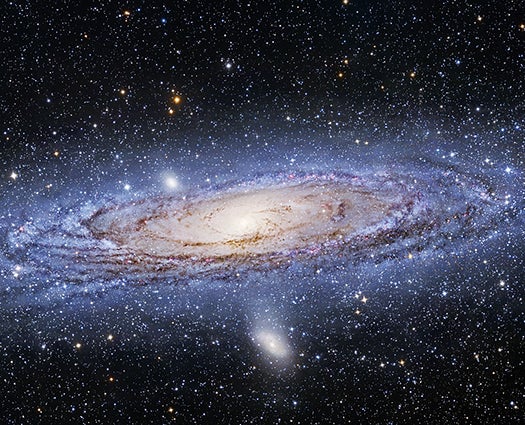 The shape of our galaxy is nothing special. Among the other clusters of stars that can be easily observed from our corner of the universe, a few are blobby and egg-shaped, but more than two-thirds are so-called “disc galaxies,” or ones whose stars have settled into flat orbits, as if traveling along the surface of a giant vinyl record. Almost every disc galaxy looks at least a bit like ours, with stars that group together into spiral arms.

What causes the spirals? “A galaxy is constantly bombarded by satellite galaxies,” says Chris Purcell of West Virginia University. When one galaxy passes by or through another, the resulting forces can send a shockwave throughout its structure, bunching stars together in spindly shapes that rotate around the center. “It’s essentially a vibration that travels gravitationally throughout the disc,” Purcell explains. As a galaxy ages, these perturbations tend to mount, and the disc goes from being thin, circular, and relatively homogeneous to thicker and more distorted. It’s a natural process, says Purcell: “These galaxies are not only trying to turn themselves into spirals, they are constantly getting banged into by things that are turning them into spirals.”

The Milky Way would seem to be somewhat early in the process, as evidenced by its slender figure. But things are changing: Several of the other, smaller galaxies are now (on a cosmological time-scale) bumping up against us. One of these is the Sagittarius Dwarf. “It turns out that it’s on the opposite side of the galaxy from us,” Purcell says, “and so it’s hitting the disc from underneath.” Purcell’s simulations suggest that these collisions could account for the spiral that we see today.

But an even more extreme collision could be in the cards. “We’re on our first in-fall toward Andromeda,” Purcell warns, “and we’re approaching it directly.” What would happen then? “It’s going to destroy both discs and turn the entire system into an elliptical blob.” But let’s not get ahead of ourselves: That crash is still more than a billion years off.