How old is the universe? Our answer keeps getting better.

After thousands of years, we’re getting more consistent age estimates. 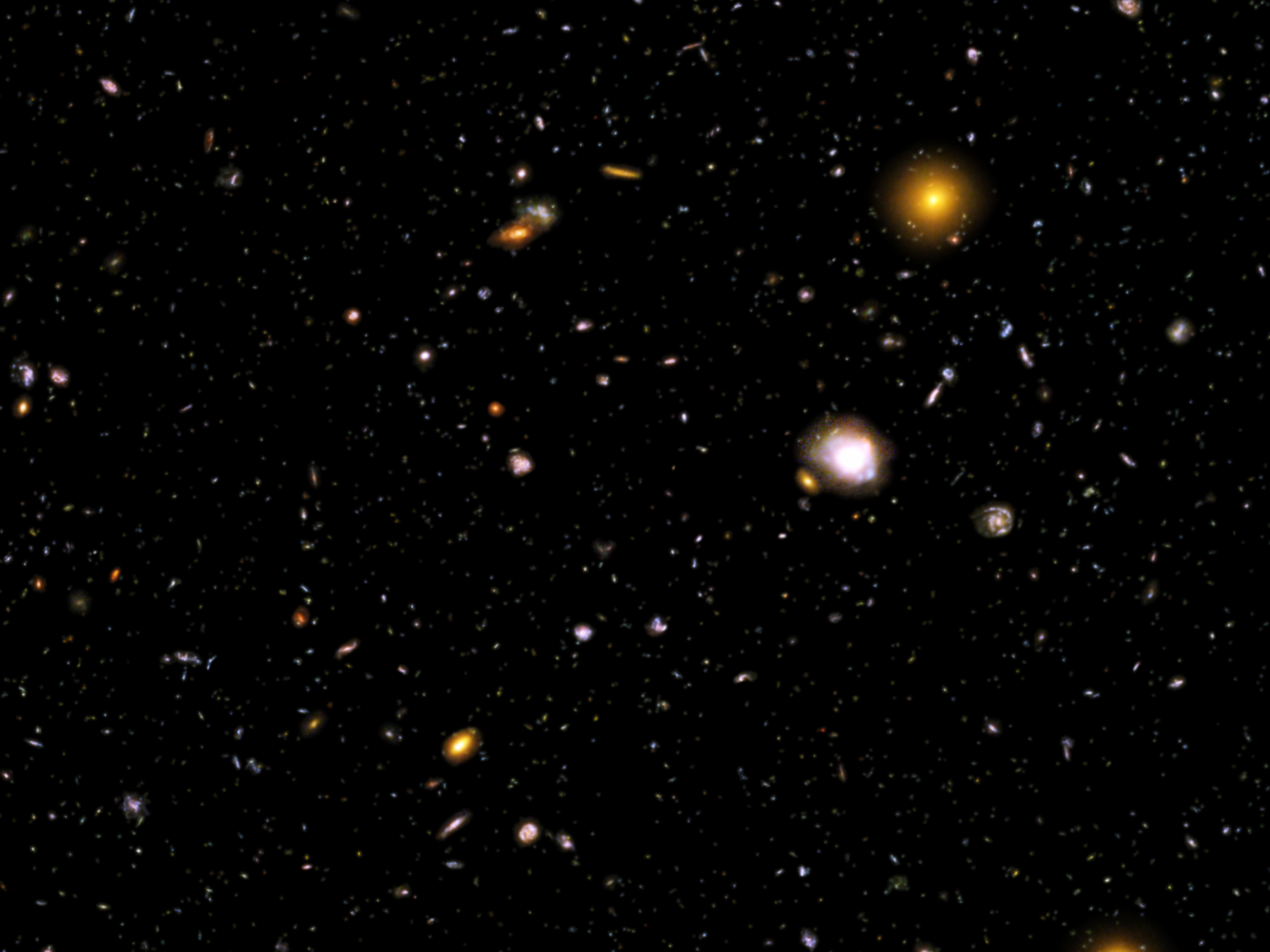 Measuring the distance to various galaxies and the speed at which they are moving away from each other as the universe expands is one way to tell how old the universe is. NASA, ESA, F. Summers, Z. Levay, L. Frattare, B. Mobasher, A. Koekemoer and the HUDF Team (STScI)
SHARE

In milliseconds, Google can serve up a fact that long eluded many of humanity’s deepest thinkers: The universe is nearly 14 billion years old—13.8 billion years old to be exact. And many cosmologists continue to grow more confident in that number. In late December of 2020, a collaboration of researchers working on the Atacama Cosmology Telescope (ACT) in Chile published their newest estimate, 13.77 billion years, plus or minus a few tens of millions of years. Their answer matches that of the Planck mission, a European satellite that made similar observations between 2009 and 2013.

The precise observations of ACT and Planck come after more than a millennium of humans watching the sky and pondering where it all could have come from. Somehow, primates with lifespans of less than a century got a handle on events that took place eons before their planet—and even the atoms that would form their planet—existed. Here’s a brief account of how humanity came around to figure out how old the universe is.

Antiquity: The beginning of creation

Every culture has a creation myth. The Babylonians, for instance, believed the heavens and the Earth to be hewn from the carcass of a slain god. But few belief systems specified when existence started existing (one exception is Hinduism, which teaches that the universe reforms every 4.3 billion years, not so far off from the actual age of the Earth).

The idea that stuck, at least in the west, came from the Greek philosophers, and it was actually something of a scientific step back. In the fourth and third centuries BCE, Plato, Aristotle, and other philosophers went all in on the notion that the planets and stars were embedded in eternally rotating celestial spheres. For the next millennium or so, few expected the universe to have an age at all.

Astronomer Johannes Kepler realized in 1610 that one major crack in the popular Greek-inspired cosmology had been staring star gazers in the face all along. If an eternal universe hosted an infinite number of stars, as many had come to believe, why didn’t all those stars fill the universe with a blinding light? A dark night sky, he reasoned, suggested a finite cosmos where the stars eventually peter out.

The clash between the night sky and the infinite universe became known as Olber’s paradox, named after Heinrich Olber, an astronomer who popularized it in 1826. An early version of the modern solution came, of all people, from the poet Edgar Allan Poe. We experience night, he speculated in his prose poem Eureka in 1848, because the universe is not eternal. There was a beginning, and not enough time has elapsed since then for the stars to fully light up the sky.

1900s: The modern and early universes come into view

But the resolution to Olber’s paradox took time to sink in. When Einstein’s own theory of gravity told him that the universe likely grew or shrank over time in 1917, he added a fudge factor into his equations—the cosmological constant—to get the universe to hold still (allowing it to endure forever).

Meanwhile, larger telescopes had brought clearer views of other galaxies to astronomers’ eyepieces, prompting a fierce debate over whether they were looking at far-off “island universes,” or nearby star clusters inside the Milky Way. Edwin Hubble’s keen eyes settled the argument in the late 1920s, measuring intergalactic distances for the first time. He found that not only were galaxies immense and distant objects, they were also flying away from each other.

The universe was expanding, and Hubble clocked its expansion rate at 500 kilometers per second per megaparsec, a constant that now bears his name. With the expansion of the universe in hand, astronomers had a powerful new tool to look back in time and gauge when the cosmos started to grow. Hubble’s work in 1929 pegged the universe at expanding in such a way that it should be roughly 2 billion years old.

“The expansion rate is telling you how fast you can rewind the history of the Universe, like an old VHS tape,” says Daniel Scolnic a cosmologist at Duke university. “If the rewind pace is faster, then that means the movie is shorter.”

But measuring the distances to far-flung galaxies is messy business. A cleaner method arrived in 1965, when researchers detected a faint crackling of microwaves coming from every direction in space. Cosmologists had already predicted that such a signal should exist, since light emitted just hundreds of thousands of years after the universe’s birth would have been stretched by the expansion of space into lengthier microwaves. By measuring the characteristics of this Cosmic Microwave Background (CMB), astronomers could take a sort of snapshot of the young universe, deducing its early size and contents. The CMB served as unassailable evidence that the cosmos had a beginning.

“The most important thing accomplished by the ultimate discovery of the [CMB] in 1965 was to force us all to take seriously the idea that there was an early universe,” wrote Nobel prize laureate Steven Weinberg in his 1977 book, The First Three Minutes.

1990 to present: Refining the calculation

The CMB let cosmologists get a sense of how big the universe was at an early point in time, which helped them calculate its size and expansion today. Scolnic likens the process to noting that a child’s arm appears one foot long in a baby picture, and then estimating the height and growth speed of the corresponding adolescent. This method gave researchers a new way to measure the universe’s current expansion rate. It turned out to be nearly ten times slower than Hubble’s 500 kilometers per second per megaparsec, pushing the moment of cosmic genesis further back in time. In the 1990s, age estimates ranged from 7 to 20 billion years old.

Painstaking efforts from multiple teams strove to refine cosmology’s best estimate of the universe’s expansion rate. Observations of galaxies from the Hubble Space Telescope in 1993 pegged the current Hubble constant at 71 kilometers per second per megaparsec, narrowing the universe’s age to 9 to 14 billion years.

Then in 2003, the WMAP spacecraft recorded a map of the CMB with fine features. With this data, cosmologists calculated the universe’s age to be 13.5 to 13.9 billion years old. About a decade later, the Planck satellite measured the CMB in even more detail, getting a Hubble constant of 67.66 and an age of 13.8 billion years. The new independent CMB measurement from ACT got basically the same numbers, further bolstering cosmologists’ confidence that they know what they’re doing.

“Now we’ve come up with an answer where Planck and ACT agree,” said Simone Aiola, a cosmologist at the Flatiron Institute and member of the ACT collaboration, in a press release. “It speaks to the fact that these difficult measurements are reliable.”

Up next: A cosmological conflict

But as measurements of the early and modern universes have gotten more precise, they’ve started to clash. While studies based on the CMB baby picture suggest a Hubble constant in the high 60s of kilometers per second per megaparsec, distance measurements of today’s galaxies (which Scolnic compares to a cosmic “selfie”) give brisker expansion rates in the low to mid 70s. Scolnic participated in one such survey in 2019, and another measurement based on the brightness of various galaxies came to a similar conclusion (that the modern universe is speedily expanding) in January 2021.

Taken at face value, the faster rates these teams are getting could mean that the universe is actually around a billion years younger than the canonical 13.8 billion years from Planck and ACT.

Or, the mismatch may hint that something deeper is missing from cosmologists’ picture of reality. Connecting the CMB to the present day involves assumptions about the poorly understood dark matter and dark energy that appear to dominate our universe, for instance, and the fact that the Hubble constant measurements aren’t lining up could indicate that calculating the true age of the universe will involve more than just rewinding the tape.

“I am not certain about how we are deriving the age of the universe,” Scolnic says. “I’m not saying that it’s wrong, but I can’t say it’s right.”