One In Five Sun-Like Stars Have Earth-Like Planets 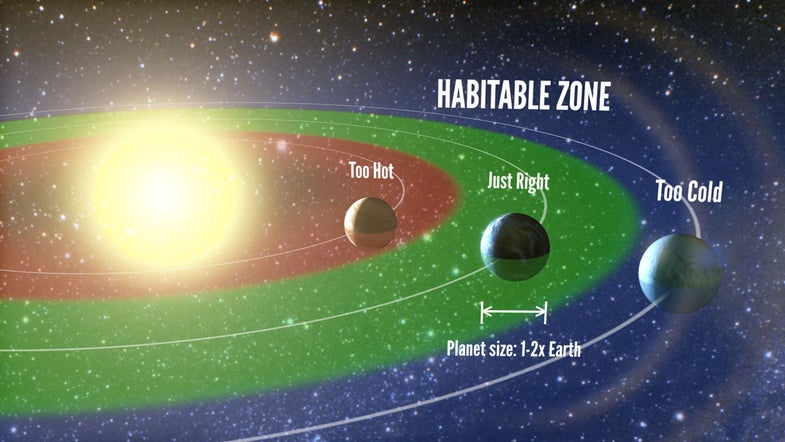 Back in February, a team at Harvard announced they had found a possible Earth-like planet just 13 lightyears away. The study detailed the prevalence of these planets orbiting red dwarf stars and found that about 15 percent have Earth-size planets within habitable zones. However, if you’re stargazing from your backyard with only your eyes to guide you, you wouldn’t be able to see these cooler, smaller stars. Red dwarfs are one-third the size and one-thousandth as bright as the sun.

But in this week’s PNAS Online Early Edition, a team of researchers from University of California at Berkeley released a study that looks at how common Earth-size planets are around stars that are more like our sun.

The study found that for stars that more closely resemble our sun, about 22 percent, or about one in five stars, have these Earth-size planets within the habitable zone. The habitable zone includes orbits where planets receive the same amount of stellar energy from a star as the Earth receives from the sun. Earth-size planets include those that are between one and two times the size of Earth. Perhaps the most exciting prospect of the study is the finding that the closest potential Earth-like planet is only 12 lightyears away.

Learning more about planets similar to Earth could aid in scientists’ search for life.

Using data from Kepler, lead author Erik Petigura and his team analyzed 42,000 G- and K-type stars visible to the naked eye from Earth. These stars’ surface temperatures range from just a bit hotter than the sun’s 5,778 Kelvin to as cool as 4,100 Kelvin—all of which are hotter than the M-class red dwarfs studied previously.

“I do think that this work is a new chapter, but it’s not a new book,” Petigura tells Popular Science. Indeed, earlier this year, Petigura published another paper that investigated the prevalence of planets as small as Earth, but only those within the orbit of Mercury—much closer to the star than Earth’s orbit. With the study published this week, Petigura and his team are pushing that out to periods that are more similar to Earth-like periods, which house planets that have lukewarm temperatures similar to Earth.

Out of those 42,000 stars, the team found 603 planets, 10 of which fit the bill for orbit and size similar to Earth’s. But if left it at that, there would be a significant number of planets unaccounted for. So, using custom-built software called TERRA, Petigura corrected for the challenges associated with finding all of the planets orbiting stars in the Kepler field, and reached a total of 8,000 Earth-like planets.

“I have been working a lot of late nights, coming home after dark. And around this of year, the constellation Cygnus is high overhead and I’ve been looking up at these stars quite a bit,” Petigura says. “I was remembering questions I had when I was a little kid, looking up and wondering how many of those stars have planets that are in some way like the Earth.”

And learning more about planets with similar positioning and properties to Earth could of course aid in scientists’ search for life and even future habitable sites.

“I’m not saying we found Earth 2.0,” Petigura says. “But it’s an important stepping stone to answering that question. I feel so fortunate to be alive in a time when we’re even able to start answering this question.”