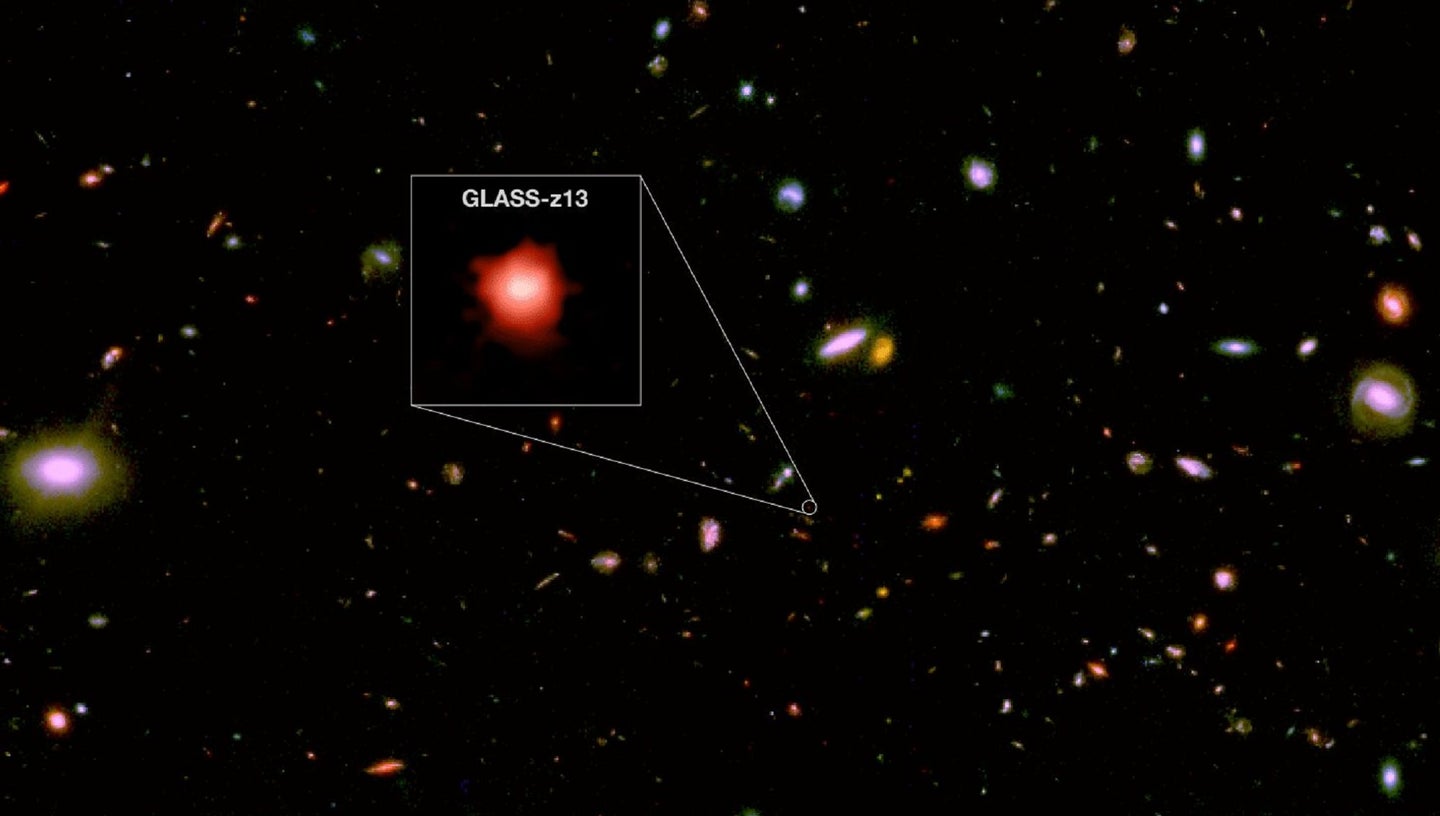 When Harvard’s Rohan Naidu saw the galaxy, the first thing he did was message his collaborator, Pascal Oesch, a cosmology professor at the University of Geneva in Switzerland. The second thing he did was call his girlfriend.

“‘Would you like to be the second human being to see potentially the most distant galaxy ever known?’” Naidu recalls asking her. She looked, found it “a bit underwhelming,” he says, and went back to watching TV. “But she’s come around,” he says with a laugh.

The galaxy candidate in question, GLASS-z13, doesn’t look like much to the untrained eye. Just a red splotch of light. But that unassuming visual is precisely why GLASS-z13 captured Naidu’s attention. It’s how he expects a galaxy that existed 13.5 billion years ago, one that is close to the limits of our ability to detect, to look from the vantage point of the James Webb Space Telescope (JWST).

After the first batch of data from the JWST became public last week, Naidu, who is a postdoctoral researcher at the Center for Astrophysics | Harvard & Smithsonian, spent every waking hour filtering through the data to search for the most distant galaxies ever detected. He didn’t get a lot of sleep, but his efforts paid off.

[Related: Hubble discovers a distant galaxy that might have closely followed the Big Bang]

On July 19, along with collaborators from around the globe, Naidu posted a paper in advance of expert review to the open access platform arXiv that describes two such candidate galaxies. He estimates one of these to be about 13.5 billion years old, making it the most distant galaxy ever detected. That would mean the system, GLASS-z13, was around perhaps as early as 300 million years after the Big Bang, which is thought to have occurred 13.8 billion years ago. As such, GLASS-z13 offers astronomers a never-seen-before view into the early days of the universe. And it is already challenging existing ideas about the earliest galaxies.

“I could not believe my eyes,” Naidu says of first seeing GLASS-z13 in the JWST data. He immediately noticed that it was bright and clear, which stood out as a bit of a surprise. “Even though the universe was so young, these things managed to have some kind of growth spurt and become so bright and so massive so quickly.”

Naidu is careful to describe GLASS-z13 as a “candidate” galaxy, as the team’s analysis from the first batch of JWST data still needs to be validated by follow-up observations. However, on the same day that Naidu uploaded the study to arXiv, another team of researchers independently posted a report that describes the same galaxy candidates—and also places them as the most distant galaxies we’ve ever seen.

“If two independent groups see that, it gives confidence,” says Renske Smit, an astrophysicist at Liverpool John Moores University in England who was not involved in either paper. Still, she says, “I think we need unambiguous confirmation that these galaxies were formed so early in the universe.”

That confirmation, Smit says, will come from subsequent JWST observations that look more closely at the spectrum of light coming from GLASS-z13.

Naidu and his colleagues initially determined the distance of the galaxy candidate by looking at that patch of sky in several different infrared wavelengths. As light travels through time and space, its wavelengths are stretched out to be longer. Their light, therefore, appears redder, in what is called a “redshift.” A galaxy that is far, far away will appear to us to be redder than a similar galaxy nearby. The scientists estimated how far the light from GLASS-z13 had traveled by estimating how much it had likely shifted.

JWST, much like a pair of night goggles, is designed to pick up weak heat signatures found in the longer, infrared wavelengths of light. But that means the telescope also finds old, dead, or dying galaxies. Because these galaxies are cooler than young ones, they can also appear quite red, even when nearby, says Brooke Simmons, an associate professor of astrophysics at Lancaster University who was not involved in the new paper. But Simmons says she thinks the study authors have done “a reasonable job” trying to account for this; if the system was from the “middle-aged part of the universe,” she says, “we would be still be able to see it with the bands [of light] that are shorter wavelengths and we don’t.”

But the redness of GLASS-z13 wasn’t Naidu’s only clue indicating the galaxy candidate was extremely far away. He also noticed something missing: the bluest photons.

In the very early universe, “oceans of neutral hydrogen” soaked up the deepest-blue photons, leaving behind only particles at redder wavelengths, Naidu explains. And the missing photons correspond to those that hydrogen absorbs, he says, suggesting that the light JWST saw from GLASS-z13 is indeed emanating from the earliest parts of the universe.

Naidu and his colleagues are already working to get time on JWST to make the necessary follow-up observations to confirm their estimates. The next observations will look at specific parts of the spectrum of light coming from GLASS-z13. This will allow them to more precisely measure the galaxy candidate’s redshift.

Characteristics of GLASS-z13 are already raising new questions for astrophysicists who study the early days of the cosmos. Primarily, its remarkable brightness and mass has caught the attention of scientists. They estimate that it is approximately 1 billion times the mass of our sun.

“How do you get all the stars in there so quickly? We think it takes time to build up a galaxy that’s massive enough, that has enough stars for it to be so bright,” Smit says. “And so either stars might start forming earlier than we thought, or maybe these galaxies have somehow a way of forming stars really, really quickly. We don’t quite know yet.”

[Related: Rare ‘upside-down stars’ are shrouded in the remains of cannibalized suns]

Some scientific models also predicted that galaxies like this would be extremely rare, Naidu says. “But here, we found two of them, not too far away from each other.”

The other galaxy candidate described in Naidu’s paper, called GLASS-z11, is probably slightly less far away from Earth than GLASS-z13. It also adds a curious detail: It shows hints of moving into a spiral disk formation.

“We didn’t expect disk galaxies to form so early,” Simmons says. “A few hundred million years is a very short time. A lot of us expected a lot of turbulence, a lot of chaos, a lot of stuff just assembling in an area that has a little bit more mass and so has a little bit stronger gravity and it just gobbles up everything around it, not necessarily in the kind of ordered structure that you would need to form a coherently rotating disk.”

This discovery, about a week after the first data from JWST, is just the start. “These are not the very first stars or galaxies,” Smit says. “We could expect a lot more record-breaking galaxies in the years to come. I think we’re going to see stuff even much farther away, much older, that were stars that formed closer to the big bang.”

Correction (July 22, 2022): The story has been updated to reflect that Pascal Oesch is now at the University of Geneva, not Yale University.