Each of these dots marks a galaxy 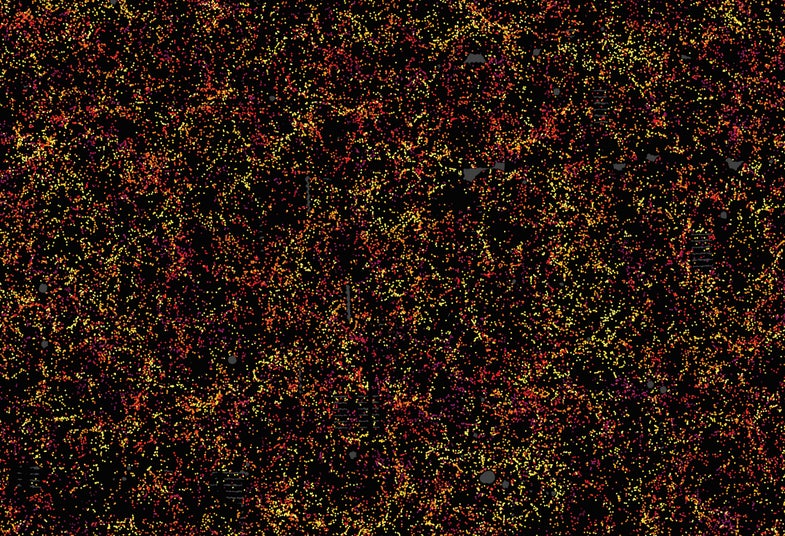 Each of the nearly 50,000 dots on this map swatch represents a galaxy. That sounds like a lot, but it’s only about 3 percent of the 1.2 million galaxies that the Baryon Oscillation Spectroscopic Survey (BOSS) recently mapped. BOSS is helping astronomers figure out how dark energy accelerates the expansion of the universe. By measuring shifts in the density of visible matter all around us, the survey determines how swiftly galaxies are spreading apart from Earth and each other.

Hundreds of Sloan Digital Sky Survey and BOSS researchers spent a decade charting these positions in a region that is 650 billion cubic light-years in volume.

While it’s relatively easy to locate galaxies in two dimensions—simply spread a picture of the night sky across a flat surface—finding their distance from Earth required an analysis of each individual galaxy’s light spectrum. At New Mexico’s Apache Point Observatory each night, scientists would focus the Sloan Foundation 2.5-meter telescope on a specific spot of sky. To prevent light from the Milky Way from interfering, they covered the view with an aluminum plate about 1 meter across. The plate contained about 1,000 holes, each drilled at the precise two-dimensional location of a galaxy. Optical fibers carried light from those holes to a spectrograph, a machine that analyzed the light to find out how fast each galaxy is moving away from us—and thus how far away it is. In a given night, the team went through about five plates and pinpointed thousands of galaxies.

Their data helps to check Einstein’s general-relativity theory, which predicts how fast the structure of the cosmos is growing. “It’s the most stringent test we’ve ever thrown at general relativity,” says BOSS co-chair Rita Tojeiro of the University of St. Andrews, Scotland, “and general relativity has passed.”

This article was originally published in the January/February 2017 issue of Popular Science, under the title “This is Your Universe.”