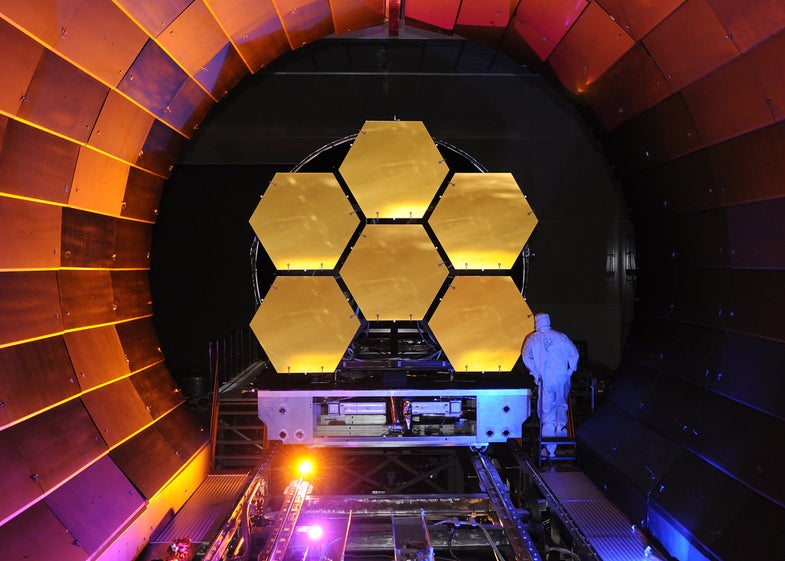 Since the day the Hubble Space Telescope blinked open and saw a blurry heavens, the world of telescope optics has revolved around double-checking every possible detail. To see clearly, a telescope’s mirrors must be flawless, bending and reflecting photons with absolutely perfect accuracy. While working on ways to fix Hubble’s poor vision, Dan Neal and his colleagues realized another optical system could benefit from perfectly designed corrective lenses: Our eyes.

Now a system designed to make sure Hubble doesn’t happen again is being used to build better contact lenses, and to ensure more accurate laser surgery. It’s one of many ways in which NASA technology spins off into new consumer products–but it’s one of few that stems, at least in part, from one of the space agency’s biggest blunders.

The Hubble Space Telescope, arguably the greatest observatory ever conceived, is one of the crowning achievements of modern science. But its first days in space were not exactly proud. Back in the 1980s, the company contracted to build Hubble’s primary mirror didn’t have a way to test its own testing equipment, and it was ultimately used improperly, resulting in a misshapen mirror.

The now-legendary saga stemmed from a positioning rod in a tool called a “null corrector,” used to create an optical template, kind of like a map for how to grind the telescope’s 96-inch primary mirror. Other tests were not considered accurate enough to measure the mirror’s perfect angle, so mirror-maker Perkin Elmer Corp. set out to design a perfect null corrector. A rod in this null corrector was installed upside down, changing the angle at which its locator-beam reflected light. The rod looked like it was higher than it really was–objects in the mirror may be closer than they appear, if you will. When workers changed the mirror grinding to compensate for this, the result was a 1.3-millimeter error in the curvature of the mirror.

Hubble suffered from a spherical aberration, which means light reflecting off the edge of the mirror focuses on a different point from the light reflecting off its center. NASA engineers were able to figure out how it happened, and three years after Hubble’s launch, spacewalking astronauts installed corrective optics that fixed the problem.

If you are putting a space telescope a million miles up, and will never see it again, it has to be right. The same is true for people. If you are doing laser surgery on someone, and you are working on their eye, it has to be right.
That won’t be possible for Hubble’s successor, the James Webb Space Telescope. Parked in a gravitational three-way among Earth, the moon and the sun, the JWST’s perch 1 million miles from home will never be accessible for space-based repairs. It’s got to be right the first time; it needs a perfect map for grinding a perfect mirror. That’s where Dan Neal comes in.

The JWST is so big, its primary mirror is actually 18 separate beryllium hexagons that come together to form one big, shiny surface. Each segment was cast in a rough shape, machined and then ground to perfection. The segments start with a few thousandths of an inch of deviation, but must be ground to optical tolerances, with fractions of a micron in variation, Neal explained.

“There’s a metrology gap. You can measure something larger with mechanical means, but when you need to get to 0.1 micron — that’s going from 40 microns of error to 0.1,” he said. “The measurement techniques don’t exist for something in between, so we had to invent those.” 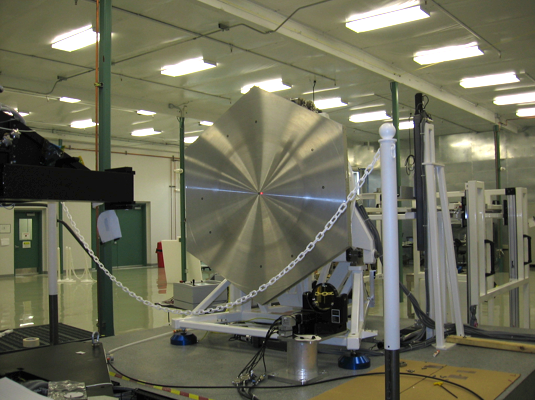 Neal is a research fellow at Abbott Medical Optics, and a former engineer at Sandia National Laboratories who worked on the Hubble corrective optics. He later cofounded a Sandia spinoff, WaveFront Sciences, which worked on optical measurement for silicon wafers, among other projects. The company became involved with JWST down a long line of subcontractors. (WaveFront was later purchased by Abbott.) During two years of engineering and testing, WaveFront engineers developed a measuring tool called an infrared Scanning Shack-Hartmann Sensor, which enables testing of the mirror’s surface immediately after grinding.

The system sweeps an infrared laser across the entire surface of the mirror, taking snapshots in 3 by 4 centimeter patches. It captured a million points across the mirror’s surface, resulting in a highly detailed map of where to grind and polish to perfect the mirror. Prior to this method, mirror makers would grind it to the best of their ability, polish it–which takes about a month–and test it, Neal said.

“If they found a bad spot, they would have to go back to grinding, take it all down, polish it again and re-test it. If they had to do that each time, it could literally take years to build these mirrors,” he said.

The system was expert at measuring the rough mirror blanks, and Neal and his colleagues realized it could measure other rough optical surfaces, too.

Despite their smooth appearance, the surfaces of our eyes actually possess a rich topography, with dents, protrusions, corneal bulges and more. Ophthalmologists use wavefront sensors to measure these ocular aberrations, but it can take hours of painstaking work to account for them. That’s important for procedures like fitting contact lenses–and mapping the eye’s topography for laser surgery. The highly sensitive, accurate scanning technology developed for the JWST is a major improvement: it can scan the entire eye in seconds.

The difference? The eye is also a lens and a detector, an entire optical system all in one. The JWST scanner was only intended to look at the mirrors’ surface, which you might compare to the cornea–the detectors are another thing entirely. Neal and other scientists at Abbott had to redesign the system to check the whole eye, tears and all.

“If you are going to do Lasik surgery or fit contacts, you have to measure through the entire optical system,” he said. 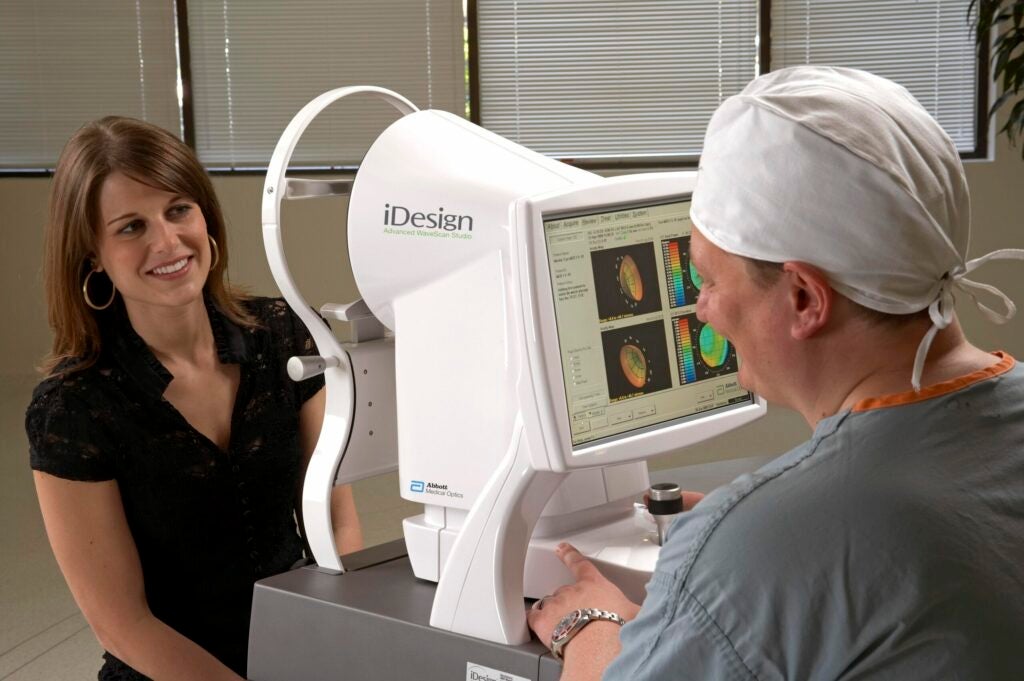 Using the same techniques, Abbott workers built a new system that can project a spot of near-infrared light onto the retina. The scattering of that light is collected by the lens and cornea, and the instrument, which analyzes the light, can measure that scattering. It even accounts for the eye’s tear film, an ever-changing coating whose thickness is affected by everything from your level of hydration to the temperature in the room.

After more than six years of development, Abbott released its eye-mapping technology in 2012. The iDesign Advanced WaveScan Studio was approved for use in Europe last summer, and it’s still waiting approval by the U.S. Food and Drug Administration, Neal said. It creates a detailed map of the eye, accounting for nearsightedness, farsightedness, astigmatism and other issues. This information is transferred to the laser, which performs the surgical procedure.

Neal himself wears glasses, and suffered a detached retina several years ago that prevents him from using the technology himself. But his wife and son have had Lasik, and his son was involved in a clinical trial with iDesign, he said.

The next step is developing a sensor that can map the density of cataracts, and to improve cataract surgery, he said.

“We think we can use it for making a good measurement of the eye to plan for cataract surgery; all you are doing is picking the right lens. Once you pick the right lens, it’s quite invasive to take it out,” he said. “So again, you want to get it right the first time.” 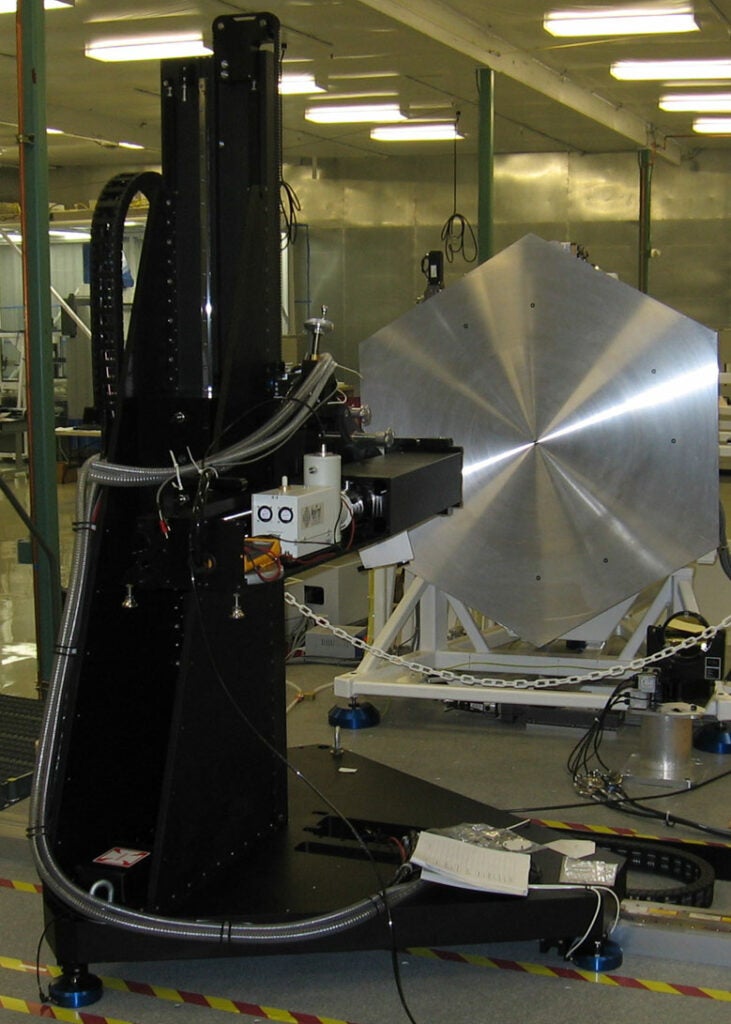 The Scanning Shack Hartmann System (SSHS), a pair of large mirror test stations, was used to measure the mirror segments of the Webb telescope. As part of that SSHS program, several improvements were made to the wavefront sensor technology that now allow eye health instruments to be aligned more precisely.
Deep Space
Space
Space Telescope