Found: The Most Potentially Life-Friendly Exoplanet So Far

Kepler 186f is the most Earth-like exoplanet we've ever discovered, but it's so far away that details will remain scarce for a long time. 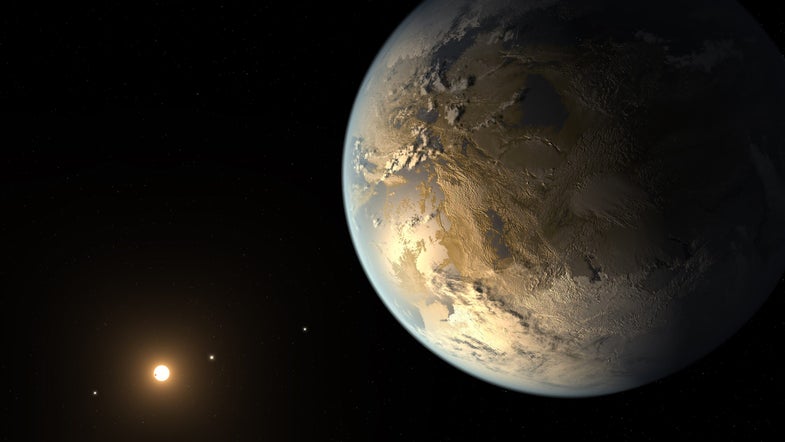 Five hundred light-years away, Earth has a cousin. Kepler data has revealed there’s rocky planet out there that’s similar in size to Earth and may have the right conditions for liquid water on its surface. It’s the first planet ever discovered with both these Earth-like qualities.

Astronomers are constantly seeking more Earth-like exoplanets because, well, Earth is the only planet we know of that has life. So the more Earth-like a planet is, scientists hope, the more likely it is to be able to support life—or perhaps already be home to living things. “The idea is that this is a step on the path for looking for life in the universe,” says Thomas Barclay, an astrophysicist who analyzes exoplanet-hunting data for the NASA Ames Research Center in California. He worked on the discovery of this planet, which is called Kepler-186f.

While Kepler-186f is the first exoplanet of its kind ever discovered, scientists think it won’t be the last.

“We expect there to be more out there,” Barclay tells Popular Science. The fact that such Earth kin have never appeared in the data before doesn’t mean they’re rare, he says. They’re just difficult to find with today’s tools. “We’re pushing the boundaries of what we’re doing right now. This discovery is a major milestone.”

Barclay thinks future NASA projects, such as the Transiting Exoplanet Survey Satellite and the James Webb Space Telescope, will make such discoveries easier… and more detailed. Because Kepler-186f is so far away, many things about it will have to remain unanswered, for now. For example, it’s impossible to know whether it truly has liquid water on its surface. Astronomers only know there’s nothing to indicate it can’t have liquid water.

“We expect there to be more out there,” Barclay says.

Here’s what we do know. Barclay and his colleagues determined Kepler-186f is just 10 percent larger than Earth, which means it’s too small to be made entirely of gas, like Jupiter. “It’s probably composed of some proportion of iron, rock, ice, water, just like our own [planet],” Barclay says. “The exact ratio of those different properties isn’t something we can measure.”

The astronomers also figured out how much energy the planet receives from its star, which is a red dwarf. The radiation not so much that water would boil away. It could be enough to maintain liquid water, so long as Kepler-186f has an atmosphere to keep it warm, like Earth does. The data can’t say whether the planet has an atmosphere, however.

Lastly, the team was able to guess at the planet’s colors—which may not be really sophisticated science, but it’s fun to know. The light Kepler-186f gets from its star is redder than Earth’s sun’s light. That means any water oceans it has would appear a duller blue than Earth’s own seas. If the planet has icebergs or clouds, those will look orange.

There aren’t any immediate followup studies planned for Kepler-186f. Instead, astronomers are hoping the future will reveal Earth cousins closer by, and thus easier to analyze. One great thing to find would be an Earth “twin,” instead of an Earth “cousin.” The twin would have to orbit a sun-like star, instead of a dwarf, like Kepler-186f does. A bigger, brighter sun would give the planet more energy than Kepler-186f’s dwarf—energy that life needs.

Barclay and his colleagues published their work today in the journal Science.