The story of Scott Carpenter’s Aurora 7 flight is often contrasted with Wally Schirra’s Sigma 7 flight. Both were accomplished... 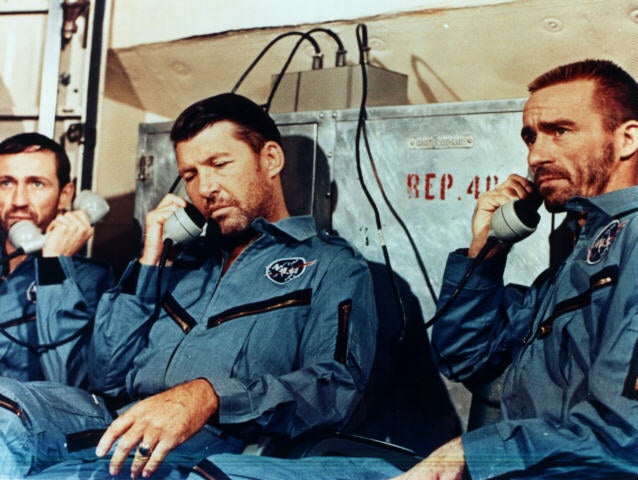 The story of Scott Carpenter’s Aurora 7 flight is often contrasted with Wally Schirra’s Sigma 7 flight. Both were accomplished pilots when they joined NASA’s astronaut corps in 1959, and both flew orbital missions in 1962. But Carpenter’s flight landed him on the wrong side of Flight Director Chris Kraft, who found an ally in Wally Schirra, an astronaut who’s own flight made him a star in Kraft’s books. Six years later, Schirra found himself in Carpenter’s place, on the wrong side of Kraft after his Apollo 7 mission without the possibility of another spaceflight.

Carpenter was the fourth American astronaut to fly and second to go into orbit as the pilot of Aurora 7, which launch on May 24, 1962. But technical problems manifested immediately, and as the flight progressed the problems compounded, ultimately leading to a dangerous overuse of fuel beginning in the first of three orbits. With fuel problems hanging in the background, tensions were high between the astronaut and Mission Control: from his position in Florida, Kraft saw Carpenter’s dwindling fuel supply as cause for alarm and passed a relentless stream of messages for Aurora 7 to conserve fuel while Carpenter remained unconcerned, in control of the situation within his spacecraft. Unfortunately, as he adjusted his spacecraft’s orientation in orbit he was unknowingly engaging his manual and automatic systems simultaneously, devouring the fuel he needed to reentry. He made it home alive but landed 250 miles from his intended splashdown point. After the mission, Kraft swore Carpenter would never fly again. 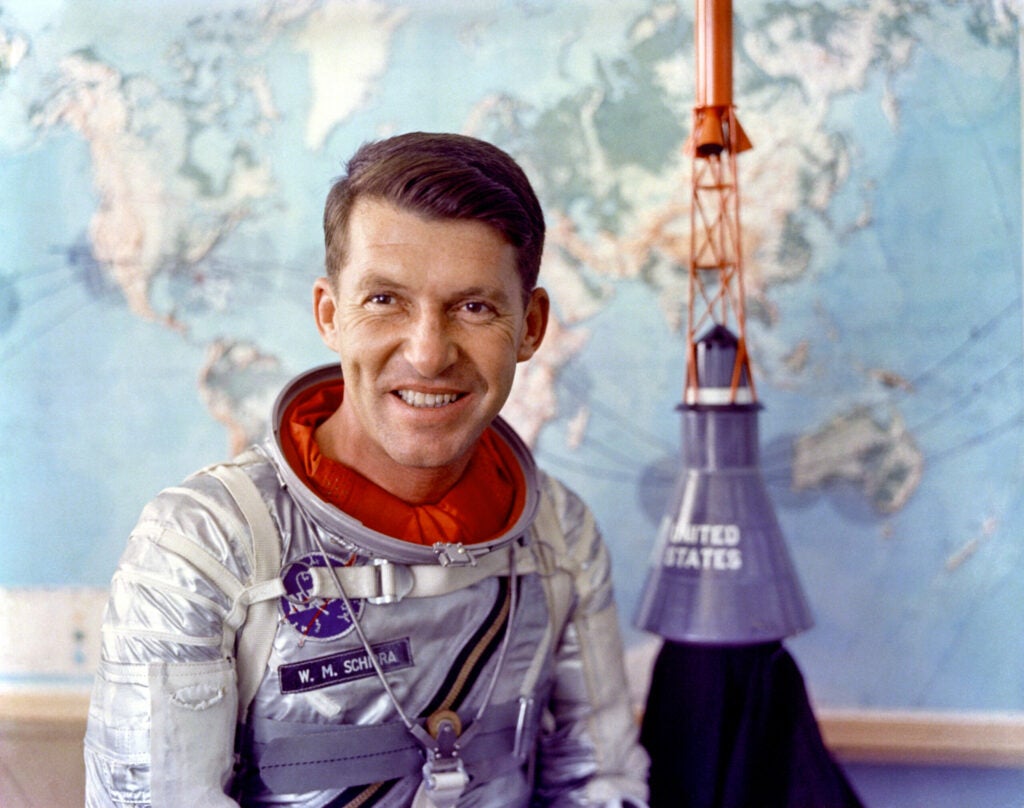 Schirra was next in line to fly after Carpenter. Officially, this mission was a duration mission; Schirra and his spacecraft would demonstrate a synergy by working together on a six orbit mission lasting just under nine hours. Unofficially, Schirra set out to prove that an astronaut could perform perfectly in space by flying his mission with engineering precision and conservative use of his consumables. It was a goal reflected in the name Schirra chose for his spacecraft, Sigma 7; “sigma” refers to the mathematical sum of the parts of an equation and engineering excellence.

Sigma 7 launched on October 3, 1962, and splashed down after 8 hours, 56 minutes, and 26 seconds of mostly drifting flight. Schirra had done almost nothing to adjust his spacecraft’s orientation, and consequently used almost no fuel; he could have stayed in orbit for another nine hours if NASA had wanted to push the mission. In the post-mission report, NASA called the flight a textbook mission.

Schirra again demonstrated engineering precision on his second flight as the commander of Gemini 6. After perfectly handling the only emergency launch abort of NASA’s Apollo era, Schirra and pilot Tom Stafford reached orbit on December 15, 1965. Waiting for them was Gemini 7, manned by Frank Borman and Jim Lovell. Gemini 7 was a duration mission; Borman and Lovell would spend a fortnight in orbit as proof that man and machine could survive the two week long trip to the Moon and back. Gemini 6 was a rendezvous mission; Schirra and Stafford would use Gemini 7 as their rendezvous target to prove the delicate manoeuvre, which would take place in Lunar orbit on Apollo, was possible. It was a goal that demanded absolute precision on Schirra’s part.

Demonstrating the dexterity of a career pilot, Schirra brought Gemini 6 to within inches of Gemini 7, then flew circles around his target spacecraft. The two Geminis were so close the men could clearly see one another through their small half-moon windows. Borman, the lone Army man between the two crews, could even read the “Beat Army” sign Schirra held up; he, Lovell, and Stafford were all Navy men, and the inter-service rivalry was often playfully present among the astronauts. 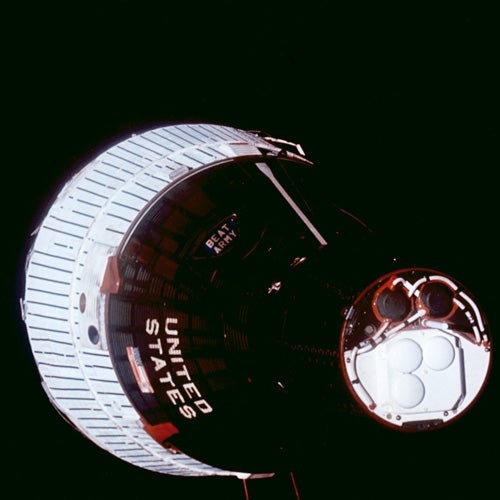 Schirra’s third spaceflight as the commander of Apollo 7 was another mission with engineering precision at its core. The 11-day mission was the first manned flight of the Apollo program, and more importantly, it was the first manned flight after the fire that claimed the lives of the Apollo 1 crew. Playing such a vital role in getting Apollo back on track, this mission was designed to shakedown the Block II spacecraft that would take astronauts to the Moon.

Command Module Pilot Donn Eisele and Lunar Module Pilot (even though there was no LM on this flight) Walt Cunningham rounded out Schirra’s crew. Among their orbital tasks were tests of their sextant, spacecraft attitude control, navigation, thermal control, and rendezvous capability. They would also make the first live television broadcast from space, an objective Schirra objected to because it wasn’t an engineering goal.

Though the men and their machine were well prepared for their mission, things hit a snag almost immediately. Shortly after Apollo 7 reached orbit on October 11, 1968, Schirra came down with a head cold. Within a day, Eisele and Cunningham were similarly under the weather. (Though as Cunningham would clarify years later, although official reports say all three men had colds only Schirra and Eisele were sick. Cunningham managed to stave off any full blown illness and joked that on Wally’s crew, if the commander had a cold everyone had a cold. Cunningham saw the shared illness as a way to spread the repercussions of irritable behavior during the flight.) Frustrated, cranky, and congested, Schirra clashed with the men in Mission Control who were working around the clock to keep him and his crew alive. And though convention said the Flight Director was the last word in the mission, Schirra eventually exerted his power as commander of his vehicle to disregard direct orders from Mission control.

Apollo 7 splashed down 11 days after launch having completed all its major goals, but Schirra found himself on the receiving end of Kraft’s criticism. Schirra’s butting heads with Mission Control throughout the flight sullied not only his own reputation but those of this crewmates as well. Kraft is said to have sworn as soon as the mission ended that none of the astronauts would every fly again, and Deke Slayton, head of the astronaut office and the one in charge of flight assignment, apparently obliged. He couldn’t assign an astronaut that Kraft’s men wouldn’t work with when there were plenty of other men waiting their turn to fly in space. 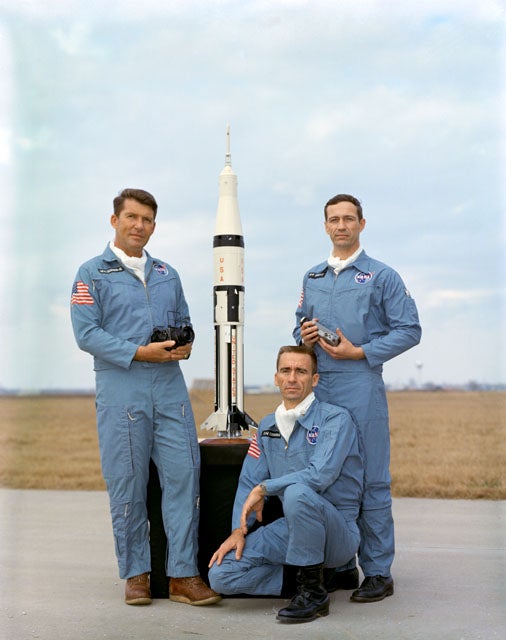 The Apollo 7 Crew, posing with a model Saturn IB.

Schirra, the only astronaut to have flown in all three Apollo-era programs, retired from NASA midway through 1969. Eisele served as the backup LM pilot for Apollo 10, a position that put him in line for a spot on the prime crew of Apollo 13 but he was passed over. He resigned from the astronaut corps in 1970 but remained with the agency until 1972. Cunningham stayed with NASA as the chief of the Skylab branch of the astronaut office but was never assigned to another flight crew. He retired from the agency 1971.

Unfortunately, Apollo 7’s success and legacy as a vital flight on Apollo’s path to the Moon wasn’t enough to untarnish the crew’s reputations. The near-mutiny on Apollo 7, which I’ve detailed in my latest article at Discovery News, is so frequently retold that it’s what many people remember about the men that flew this historic mission.

For more, check out my articles on Carpenter’s Aurora 7 flight and the near-mutiny on Apollo 7, both linked within the text.