Astronomers have two explanations for why it still shines so bright. 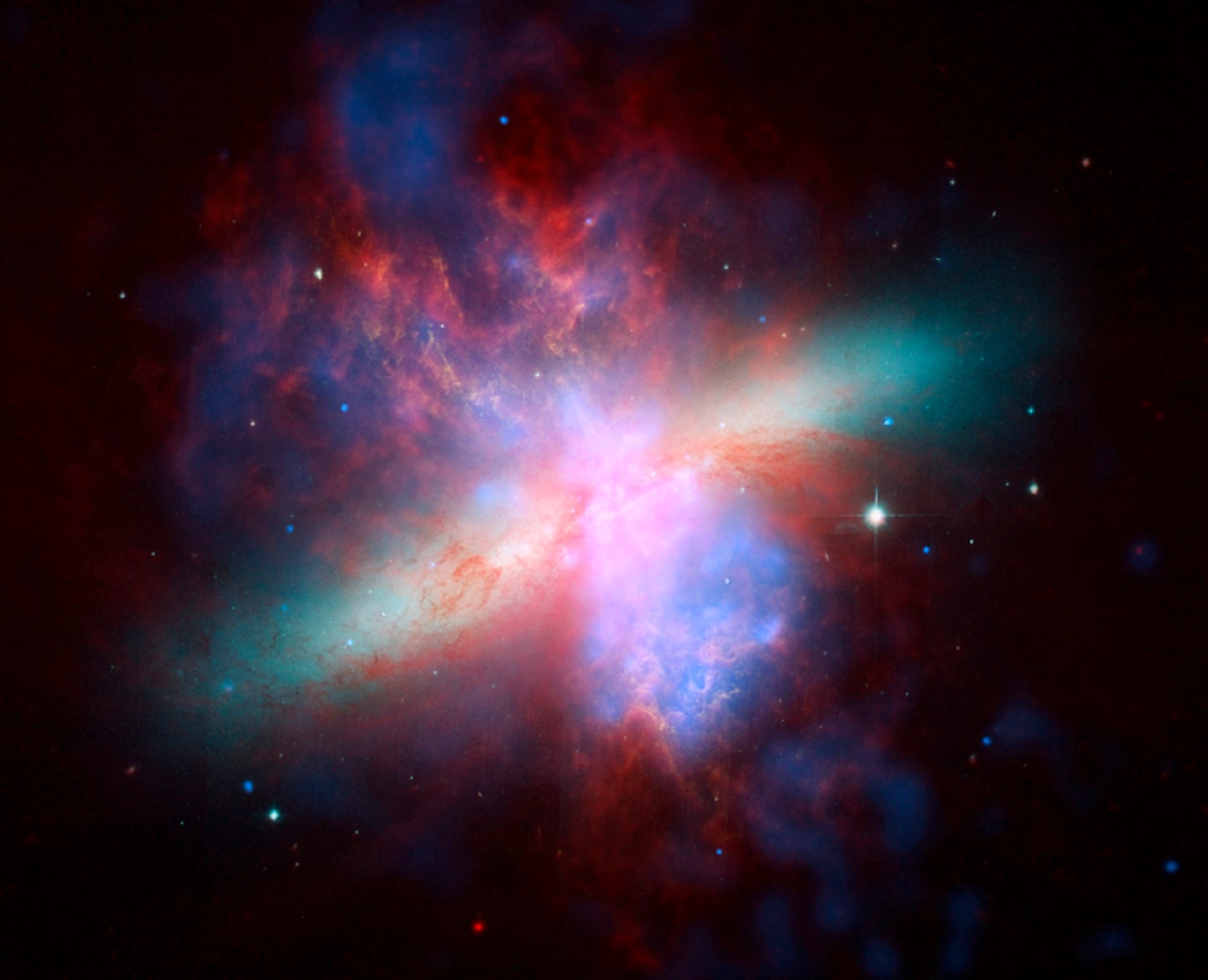 12 million-light years away, M82 is of the most famous starburst galaxies ever imaged, with a composite from three space telescopes, including Hubble. The newly discovered HD1 (see below) is more than 1,000 times farther away, and likely packs way more star power. X-ray: NASA/CXC/JHU/D.Strickland; Optical: NASA/ESA/STScI/AURA/The Hubble Heritage Team; IR: NASA/JPL-Caltech/Univ. of AZ/C. Engelbracht
SHARE

In the sixth episode of Star Trek: The Next Generation, Officer Jean Luc Picard and his android companion Data find themselves on the edge of the known universe. As Picard examines the barrier in front of the Enterprise, Data declares that they’ve landed “where none have gone before.”

While researchers have not quite made it to the edge of the universe, they did just creep one step further with the discovery of a galaxy up to 13.5 billion light-years away, named HD1. In a study published today in The Astrophysical Journal and an accompanying paper in the Monthly Notices of the Royal Astronomical Society Letters, University of Tokyo astronomer Yuichi Harikane and his colleagues outline the methods of discovery and possible implications of HD1’s existence. It’s the most distant cosmic body on record so far.

[Related: Hubble spies the most distant star ever found]

“It was very hard work to find HD1 out of more than 700,000 objects,” Harikane said in a press release. “HD1’s red color matched the expected characteristics of a galaxy 13.5 billion light-years away surprisingly well, giving me a little bit of goosebumps when I found it.”

Harikane and his team spent over 1,200 hours capturing images through the VISTA Telescope in Chile, the former Spitzer Space Telescope, and both the UK Infrared Telescope and the Subaru Telescope on the Big Island of Hawaii. They then used an array of radio wavelength receivers, also in Chile, to calculate redshift, a formula that helps astronomers estimate distances based on how light changes as the universe expands. The data showed an unexpectedly bright UV signature from HD1, which the study argues is due to one of two causes.

“The very first population of stars that formed in the universe were more massive, more luminous and hotter than modern stars,” Fabio Pacucci, an astronomer at the Center for Astrophysics in Massachusetts and coauthor of the study, said in the press release. “If we assume the stars produced in HD1 are these first, or Population III, stars, then its properties could be explained more easily. In fact, Population III stars are capable of producing more UV light than normal stars, which could clarify the extreme ultraviolet luminosity of HD1.”

HD1 might contain stars created relatively soon after the Big Bang, which would explain the high amount of light intensity researchers logged. If the luminosity is not due to Population III Stars, it could be coming from a black hole 100 million times as massive as the sun. Such a gigantic void would consume mass violently enough to generate bright light. These hypotheses, however, do not explain the rate at which the superpowered galaxy forms stars. HD1 appears to churn out roughly 100 stars per year, which is nearly 10 times the rate of similarly fashioned galaxies.

“Answering questions about the nature of a source so far away can be challenging,” Pacucci said in a press release. “It’s like guessing the nationality of a ship from the flag it flies, while being faraway ashore, with the vessel in the middle of a gale and dense fog. One can maybe see some colors and shapes of the flag, but not in their entirety. It’s ultimately a long game of analysis and exclusion of implausible scenarios.”

While questions continue to surround HD1, like a more exact distance, size, and composition, the team’s findings furthers humanity’s map of the known universe. And with further confirmation, they could deepen our understanding of the origins of the universe, too.

Correction (April 7, 2022): Due to an editing error, the headline on the story incorrectly stated that HD1 predated the Big Bang. It’s estimated that it formed .3 billion years after.