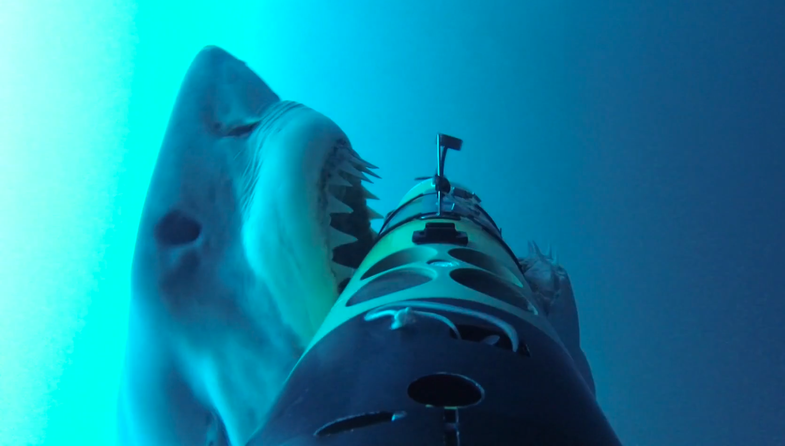 REMUS SharkCam: The hunter and the hunted from Woods Hole Oceanographic Inst. on Vimeo.

Want to see what it looks like when you get chomped on by a great white shark? Of course you do.

This video, made by the Woods Hole Oceanographic Institute, shows great white sharks near Guadalupe Island, Mexico. In 2013, Woods Hole researchers equipped a Remote Environmental Monitoring Unit, A.K.A. a REMUS-100 robot, with five cameras to find sharks and tag them. When the researchers sent REMUS underwater in Mexico, they got an eyeful of the sharks’ territorial and predatory behaviors. The sharks snuck up under the robot in much the same way they stalk and nab seals, the video explains.

REMUS-100s are versatile, underwater vehicles that are able to drive in little surveying patterns on their own. They come in different sizes and engineers are able to attach different instruments to them, including everything from sonar to radiation sensors to bioluminescence sensors. Woods Hole engineers invented them and the institute rents them out to research and military groups for ocean monitoring, seafloor mapping, and missions to find and clear underwater mines. Popular Science has written about their use in searching historical shipwrecks. (Plus, see a REMUS-100 deployment here).

In this case, the Woods Hole researchers were doing their own work with a specially-outfitted REMUS. This conference presentation from 2012 shows they’ve been preparing a REMUS to tag sharks for some time. The paper explains how the vehicle is programmed to spot and stalk sharks on its own, but doesn’t mention the possibility of sharks stalking it.