Though the earthquake that struck Japan’s eastern coast earlier today has left the country with massive destruction and hundreds of deaths, modern technology (and Japan’s impressive level of readiness) are helping the country track survivors and dampen the damage as much as possible. In the future, our ability to cope with natural disasters will only increase, due in large part to the particular talent earthquake-vulnerable areas–especially Japan (and to a lesser extent, California)–have for robotics.

Predicting earthquakes is still a remarkably fruitless effort–seismologists are not reliably able to predict even a particular month in which an earthquake will occur, let alone a day. So the work done to mitigate the damage done by earthquakes is often in post-quake search-and-rescue tactics. Interestingly, two of the most earthquake-prone places in the world are also two of the world’s hotbeds of robotics engineering. Japan is situated along the so-called Pacific Rim of Fire, at the point where the Pacific and Eurasian tectonic plates collide. The country is continually at risk of massive earthquakes, and as a technological world power, is uniquely capable of creating technological salves for ‘quakes.

Hopefully, advances like the ones shown here will be able to somewhat lessen the destruction of earthquakes in the future.

Note: While most of these creations come from Japan, we stumbled across a few from elsewhere that were so cool we couldn’t keep them to ourselves. Although, interestingly, those were mostly from another high-tech and high-risk earthquake area–California.

This robot may look like it’s trying to eat a mannequin’s face (stupid robot!), but it’s actually practicing for a controlled rescue operation. The RoboCue, a rescue ‘bot from the Tokyo Fire Department, is designed to locate and safely retrieve victims from disaster sites–specifically bomb sites, but it could be useful for natural disasters as well. It uses ultrasonic sensors and infrared cameras to locate trapped humans, and gently loads the injured person onto a cart to be transported to safety. It even has an onboard oxygen canister. 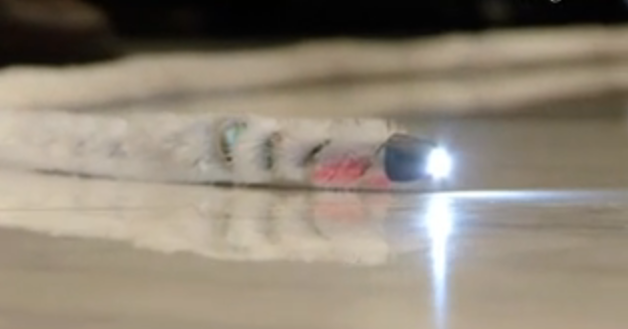 Satoshi Tadokoro, one of Japan’s leading rescue-bot researchers, is responsible for this snakebot, aimed more at the “search” part of search and rescue. The 26-foot-long, inch-thin snake actually propels itself with motor-powered nylon bristles. It may not move fast–around two inches per second–but it’s capable of turning sharp corners, climbing 20-degree inclines, and squeezing through tiny gaps, and with its camera “eyes,” it’s capable of sending back images that let rescuers know the situation inside a disaster zone. It’s been successfully tested in both control and real-life situations, helping a rescue team with a parking lot collapse in Florida. [image via Acroname] 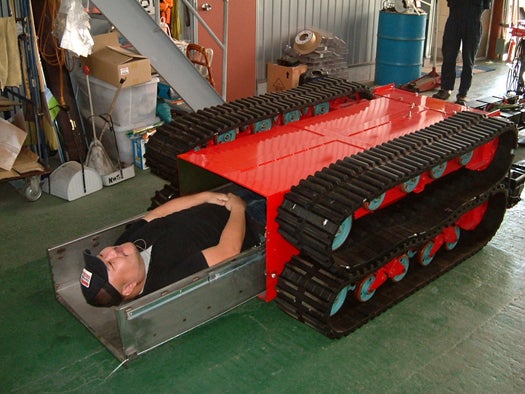 Though it may look like a coffin-tank, this robotic crawler is actually just the opposite–a rescue machine that can transport one person to safety. Created for the police department of Yokohama, Japan, this crawler is a rescue-bot that’s capable of carrying a person of up to 250 pounds to safety inside its comforting hull. Its search functions are limited to the standard infrared cameras, but the robot is primarily designed as a remote-controlled stretcher with a much greater degree of safety. It even has sensors inside to monitor a patient’s blood flow and other vital signs on the trip. 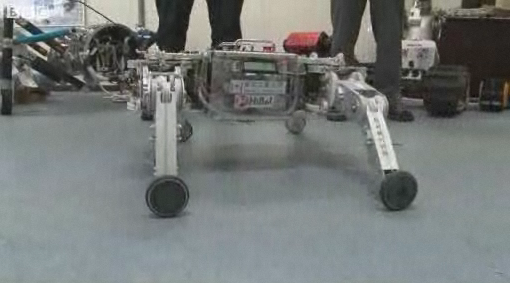 Professor Shigeo Hirose at the Tokyo Institute of Technology has three different rescue ‘bots, each designed for a slightly different purpose, demonstrated in this BBC video. The first is a snake-like robot that’s mostly notable for the presence of wheels on all sides–it can continue moving no matter which side is up. The second is a slightly hardier version of the snake-bot–still snake-like, but with treads instead of wheels and a tougher exterior, resistant to dust and water and able to handle more demanding conditions. But the one that’s really interesting is the third, which examines organic biology to figure out which mode of locomotion is best. When moving over very uneven terrain, legs tend to work best–you can position them to land on flatter or sturdier steps, compared to, say, treads. But on flat ground, some sort of wheel is preferable–faster, requiring much less energy, and more stable. So Hirose devised an ingenious convertible leg that can turn into a wheel when necessary, and then propel itself with a movement inspired by rollerskating. 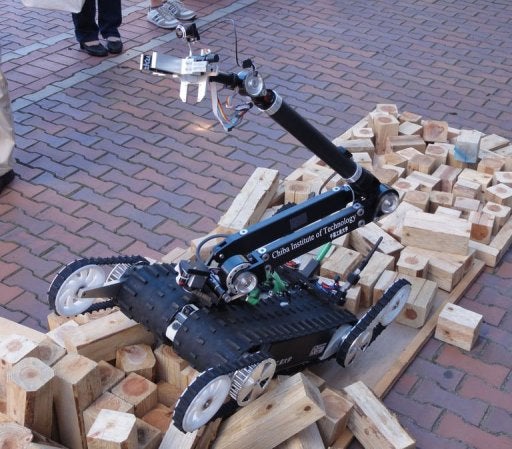 The Quince is a small but uniquely endowed robot from the Chiba Institute of Technology. About the size “of a children’s play car,” as PhysOrg notes, the Quince is equipped with four sets of wheels, outfitted with treads, and six electric motors. It also has a motorized arm capable of opening doorknobs and delivering food or other supplies. But where it gets really interesting is in its sensors. The Quince has an infrared sensor as well as a carbon-dioxide sensor, which it uses to detect human breath and body warmth. 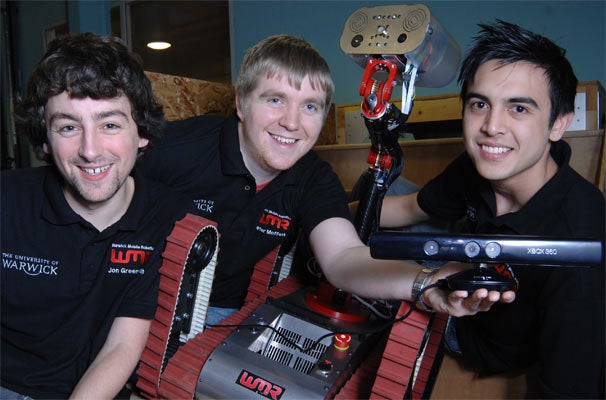 Man, is there anything the Kinect can’t do? Holograms, Clipse videos, surgical equipment–the Kinect is a jack of all image-sensing trades. Earlier this month, students at the U.K.’s University of Warwick created a robot designed for earthquake rescues that uses a Kinect as the main sensor instead of a LIDAR, a laser range-finder that’s not only far more expensive, but also less effective (it’s limited to a 2-D planar view). The Kinect’s range-finder delivers a proper 3-D depth map, which could be invaluable in helping rescuers find victims. This particular robot isn’t a rescue-bot, but more of a scout–it’s able to get in places human scouts can’t, streamlining the rescue process. [BBC] 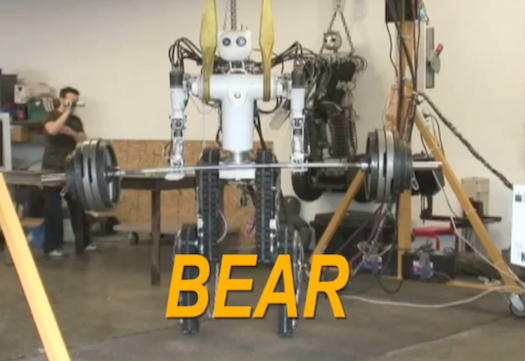 BEAR (Battlefield Extraction-Assist Robot), from the U.S.’s Vecna Robotics, is one of the more humanoid rescue-bots we’ve seen. It’s designed to safely replace humans, with the added bonus of being much stronger and more resilient (and less precious) than human soldiers. It uses two independent treads for each “leg,” which enables all kinds of specialized movements and the ability to change its height by standing on its “knees” or “hips” or “feet.” Vecna hopes the U.S. military will pick it up for use in all sorts of dangerous situations. 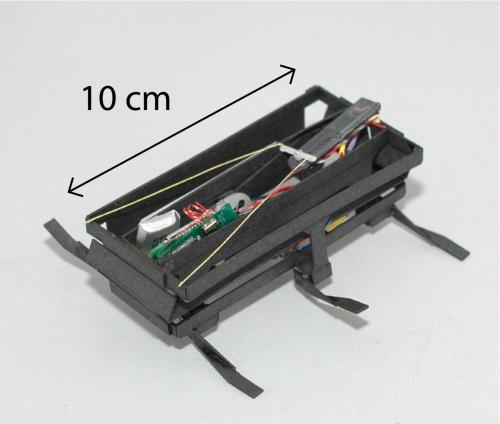 The insect world has proven a fertile ground for inspiration for robotics engineers, with some even going so far as to cyborg-ify actual insects–but the Dash, created by a biomimetics professor at UC Berkeley, is pure robot. The ultra-cheap, ultra-tough Dash was inspired by the cockroach–it was made for less than a dollar per unit, constructed from discarded parts from cellphones and other electronics, and the body is made of cardboard. It’s equipped with basic gear–low-res (but cheap) cameras from cellphones and a Wi-Fi chip are about as much as it needs. But the robot is incredibly agile and fast, moving up to five feet per second, and its cardboard body makes it nigh indestructible (this video shows that you can drop it out a 10-story window and watch it scurry away once it lands). For budget-handicapped rescue operations, the Dash could be an incredible resource.
Animals
Robots
galleries