Vest And Scarf Made From Spider Silk

In the future, spider-strengthened silk could go into bulletproof vests. 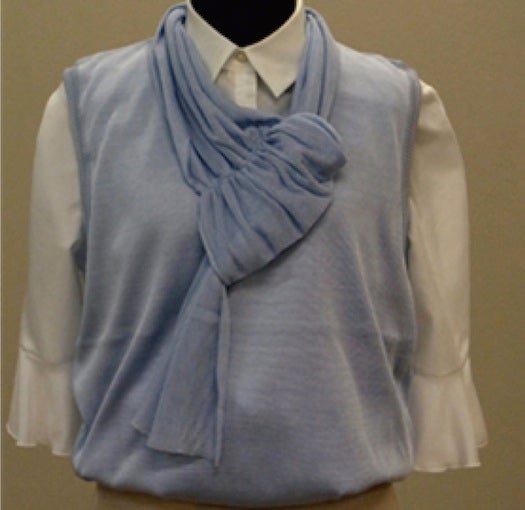 This silk scarf and vest have a nice drape and pretty color, but that’s not why everyone here at Popular Science covets them. No, we’re wishing they were ours because they’re made of super-strong, transgenic spider silk. Functional and good-looking! Our favorite.

The clothes were woven from silk produced by silkworms with a spider gene engineered into them. A mix of spider and silkworm proteins actually emerges from the spinners in the silkworms’ mouths. The resulting hybrid material is made up of less than 1 percent spider proteins, yet it’s 53 percent tougher than regular silk, according to the research team, five scientists from Japan’s National Institute of Agrobiological Sciences and Shinshu University.

Scientists have long known spider-silk proteins are exceptionally strong. Dragline silk, the stuff spiders use to make the spokes of their webs and to dangle creepily from ceilings, is five times stronger than an equal-sized thread of steel would be. Researchers have thought about using spider silk for everything from surgical thread to bulletproof vests. There’s no reason to make a cute scarf from spider silk, of course, but the Japanese team members wanted to demonstrate they could harvest their product and feed it into the same machines silk factories use.

The resulting hybrid material is made up of less than 1 percent spider proteins, yet it’s 53 percent tougher than regular silk.

Why not get the silk directly from spiders, instead of it putting it through a silkworm first? Spiders don’t make a lot of silk at once and they’re cannibalistic, so it’s hard to maintain a spider farm. Silkworms, on the other hand, have been domesticated over thousands of years. They produce voluminous silk cocoons and they’re easy to raise indoors. A silkworm that makes spider proteins could be a gentle little biological silk factory, spinning out a super-strong product.

In recent years, a number of labs have created genetically engineered silkworms that spin part-spider silk. However, this is the first time we’ve seen anybody produce and harvest enough of the material to weave it into something wearable.

In this research, scientists made copies of the genetic code for one dragline protein from Araneus ventricosus spiders. The researchers inserted the copies into the DNA of Japanese silkworms. They performed genetic tests on their worms to show the caterpillars truly did have spider genes and they performed strength tests on the raw silk.

Eventually, they made enough engineered silkworms that they were ready to kill the worms in their cocoons, harvest the silk, dye the silk threads, and knit the threads into cloth, just like silk factories do.

The researchers are now planning to try to raise their genetically engineered silkworms at commercial farms, the Japan Times reports. They published their scientific work last week, in the journal PLOS One.