Next time you’re inhaling an entire box of Girl Scout shortbread cookies, just think of the potential you’re wasting: a... 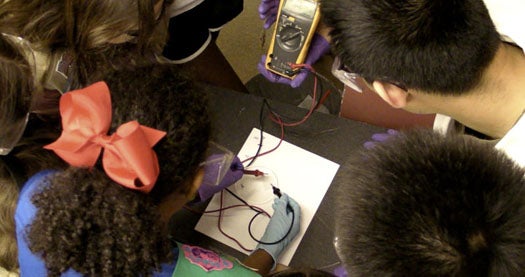 Next time you’re inhaling an entire box of Girl Scout shortbread cookies, just think of the potential you’re wasting: a full $15 billion worth of graphene. At least, that’s the estimate given by a team of Rice University researchers working on a dare.

Published as part of a paper recently published by ACS Nano, the Rice lab’s work on Girl Scout Cookies began when lab chemist James Tour mentioned at a meeting that his team had turned table sugar to graphene–a one-atom-thick layer of carbon possessing remarkable properties of strength and conductivity. He claimed that he and his grad students could grow graphene from any carbon source, and it just so happened there were Girl Scout Cookies being passed around the meeting.

And so a challenge was born. The lab invited Girl Scout Troop 25080 to join them in Rice’s nano lab to see exactly how cookies become a prized version of carbon. In their demo, they made graphene from a range of materials–grass, chocolate, a cockroach leg, even dog excrement (special thanks to Sid Vicious the mini dachshund) to show that high-quality graphene is basically waiting to be extracted from all kinds of everyday materials.

To make graphene, the Rice team uses a copper foil and a super-hot argon and hydrogen gas oven burning at more than 1,900 degrees. In this process, the object it placed on one side of the foil and, under high heat, begins to decompose. A thin sheet of graphene forms on the other side of the foil, while the residues and impurities remain on the other side.

Two of the grad students in Tour’s lab did some math given the current commercial price for quality graphene–about $250 per two-inch square–and figured that a box of shortbread cookies could generate a roughly $15 billion profit if converted to graphene.

Of course, that has everything to do with scale, supply, and demand. Right now, graphene is difficult and expensive to produce in large quantities. A box of shortbread could yield a sheet of graphene that would cover three football fields if the means of production were there. And of course if supply were that inexpensive the price would drop substantially.

In other words, the team was trying to demonstrate that–given better manufacturing means of producing graphene in bulk–sources of graphene are all around us, not that you should buy Thin Mints as long-term investment. Although in this economy you might actually come out ahead.