Maybe the animals were just mad about their low page-ranking 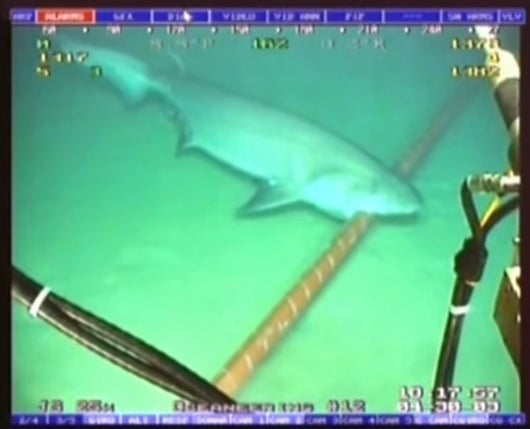 Shark bites are a real threat to undersea fiber-optic cables. No, really. Google actually goes so far as to wrap its wires in a Kevlar-like material to prevent damage from sharks, a company spokesperson recently disclosed. As you can see in the video below, the animals have been known to bite cables.

For some reason, sharks seem to like fiber-optic cables more than old-fashioned coaxial copper wires, although it’s unclear why (“Sharks have shown an inexplicable taste for the new fiber-optic cables that are being strung along the ocean floor,” the New York Times wrote in 1987). It may be because the sharks are “encouraged by electromagnetic fields from a suspended cable strumming in currents,” according to a report commissioned by the United Nations Environment Programme and the ever-sexy International Cable Protection Committee Ltd. Sharks can sense electromagnetic fields, so it’s possible the cables alarm or interest them enough to take a chomp.

Here’s more about shark-cable interactions from the report:

Sharks may also bite the cables simply because they’re curious. “If you had just a piece of plastic out there shaped like a cable, there’s a good chance they’d bite that too,” Chris Lowe, a researcher at California State University, told Wired.

Call me a crank, but it’s somewhat comforting to me that in our modern age, where people “are living in the future” and communications can zip back and forth at the speed of light, that the cables which allow this to happen are still at risk from an ancient predator. “Where’s your homework, Doug?” “Oh, sorry, a shark bit an undersea cable while I was emailing it to myself, so I don’t have it.”