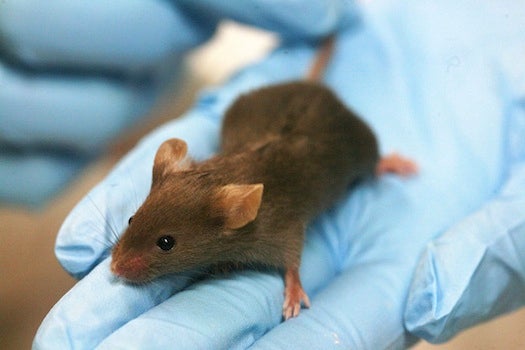 Mice are great (see: high-endurance mice, mice with lab-grown artificial organs, Israeli bomb-sniffing security mice) but sometimes you just don’t want them in your apartment/house/bakery/kitchen/New York subway station, which is why you might buy some warfarin, a common rodent poison. Some mice, however, have developed an immunity to that poison through highly unusual means: horizontal gene transfer, a kind of evolution-through-hybridization that’s only been seen before in microbes.

As reported in the current issue of Current Biology, mice in a German bakery were discovered to have absolutely no reaction to the use of even a particularly nasty form of warfarin, which is usually a kiss of death for our friend the house mouse. A genetic analysis showed that the mice in that kitchen actually had a large chunk of DNA from the Algerian mouse, a separate (though closely related) species from the house mouse that’s usually found around the sandy western coasts of the Mediterranean.

The Algerian mouse, you see, is immune to warfarin–apparently that gene also helps manage a vitamin K deficiency the Algerian mouse’s diet has–and humans, with all of our travel and such, introduced the two species, which would not normally have come into contact with each other. The house mouse bred with the Algerian mouse, and bam: poison-immune super house mice.

This kind of evolution, in which hybridization produces a beneficial genetic makeup, is called horizontal gene transfer. It’s very different from the usual style of evolution, in which beneficial mutations are passed on to the next generation, and has actually never been observed before in any complex animal. Horizontal gene transfer has heretofore only been seen in microbes, so it’s pretty amazing to see it in something as complex and adorable as a mouse. Of course, that may make it more difficult for bakers and MTA employees to rid their businesses and/or subway stations of rodents, but the mice are probably pleased.