Manufacturing tiny, fragile wings is a delicate business, but using 3-D printing tech a team of Cornell roboticists have trimmed... 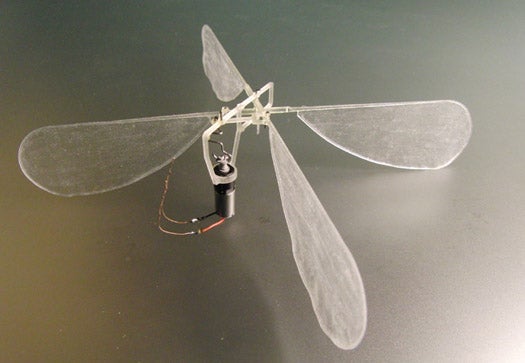 Manufacturing tiny, fragile wings is a delicate business, but using 3-D printing tech a team of Cornell roboticists have trimmed days off their usual production process by printing their fragile robots right on the workbench. That’s not just good news for ornithopter enthusiasts (surely they exist), but for aerospace engineers and entomologists as well.

Hovering ornithopters (flapping wing aircraft) usually mimic insects or something like a hummingbird, which means they need a unique set of wings that are delicate, lightweight, thin, and durable enough to stand up to high-speed flapping. Making these wings usually takes researchers a good deal of time and effort, making experimentation with new wing designs a lengthy and tedious process.

Leveraging advances in rapid prototyping tech, the Cornell team was able to cut that time–often up to a few days–to just a few minutes. Printing the translucently thin wings (constructed of a thin polyester film stretched on a carbon fiber frame) on a desktop printer allowed them not only to cut down on production time, but allows for much faster experimentation with different wing designs.

For the Cornell team, that resulted in a functioning 3.89-gram ornithopter capable of hovering for 85 seconds, the lightest and longest-duration model yet. But the ability to experiment quickly and precisely with various wing shapes and constructions should also allow researchers to more closely mimic real insect wing designs and study the lift dynamics powering a variety of natural flying organisms.