Effect Of Fracking On Wildlife Is Basically Unknown

The mystery is not eye-opening. 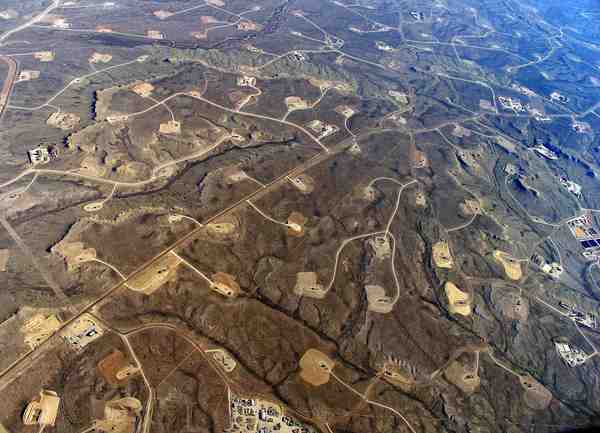 Hydraulic fracturing has increased seven-fold across the United States since 2007. Over that time period, scientists’ knowledge of the environmental impacts of fracking has not progressed nearly this much. Startlingly little research has looked at biological effects of this process on the environment and wildlife. But what we do know is alarming enough that more research is urgently needed, according to a new study, and the lack of knowledge quite stunning.

As you may know, in the course of fracking, various chemicals are mixed with water and injected into the ground at high pressures, releasing previously inaccessible stores of natural gas. The identity of some of these chemicals has not been disclosed, which is worrisome;: how can we possibly know the effects of an unknown substance? Some wells used a total of 20 or more undisclosed chemicals, the study noted. But the chemicals that are known to have been put into fracking fluids–methanol, xylene, hydrochloric acid, toluene, benzene, and formaldehyde–can cause a variety of health problems in humans, the authors wrote.

How might this effect wildlife? Scientists don’t know, and that’s the problem. “If you look down on a heavily fracked landscape, you see a web of well pads, access roads, and pipelines creating islands out of what was, in some cases, continuous habitat,” says Sara Souther, a conservation fellow at the University of Wisconsin, who is the first author of the paper. “What are the combined effects of numerous wells and their supporting infrastructure on wide-ranging or sensitive species, like the pronghorn antelope or the hellbender salamander?”

Typically fracking chemicals are injected 3,000 to 9,200 feet (900 to 2800 meters) underground, where it has been generally thought that they couldn’t make it to the surface or mix with reservoirs of drinking water. But that isn’t true, as scientists have found geological connections between these deep injection sites and surface drinking water, at least in the Appalachian Basin. And in the past few years there have been at least three scientific studies showing that fracking chemicals and/or methane can contaminate drinking water. Here’s a 2011 example (PDF) from Wyoming; one from the same year in New York / Pennsylvania; and a 2013 study in the same general area.

The study, published in the August issue (PDF) of the journal Frontiers in Ecology and the Environment, also found that spills of drilling fluid or wastewater are not adequately studied or reported, and thus the impacts from these events are unknown. And gas companies didn’t report over one-third of all spills in the last year, Souther said. Of the 24 states that are actively fracking, only five “maintain public records of spills or violations for oil and gas drilling operations,” the authors wrote.

“We can’t let shale development outpace our understanding of its environmental impacts,” said study co-author Morgan Tingley, a researcher at Princeton’s Woodrow Wilson School of Public and International Affairs, in a statement. But all signs suggest that thus far, it has. The authors write that research should primarily focus on events that could “lead to contamination of fresh water, such as equipment failure, illegal activities, accidents, chemical migration, and wastewater escape, as well as cumulative ecological impacts of shale development.”