Largest Fungus In The World Found Under Tree in China

A half-ton, 33-foot-long fungal fruiting body was discovered growing under a felled tree in China, researchers said. It’s the most... 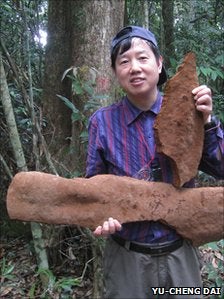 The giant fungus was found living under a fallen tree. The entire fungus weighs between 800-1,100 pounds.

A half-ton, 33-foot-long fungal fruiting body was discovered growing under a felled tree in China, researchers said. It’s the most massive fruiting body — equivalent to a mushroom, in other fungal species — ever discovered.

The giant fungus is estimated to be 20 years old, according to the BBC. It was feeding on rotting wood, which allowed it to reach its prodigious size.

Like this huge fruiting body, mushrooms are actually the spore-bearing fruit of fungus, growing above soil or on top of its food source. The spores produce new generations of fungi.

Botanists recently determined that some fungi species use pressurized gas to propel their spores at speeds up to 70 mph within microseconds. This one is estimated to hold 450 million spores, according to the BBC.

The fruiting body is from the species Fomitiporia ellipsoidea, a perennial fungus. It forms a long, brown shape up to 35.5 feet long, 2.8 feet wide and about 2 inches thick. Parts of it broke off into shards, as depicted in the photo above.

Scientists have not removed the entire thing, but density tests suggest it weighs at least half a ton, according to the BBC. It was discovered by accident, according to Professor Yu-Cheng Dai of the herbarium of biology at the Chinese Academy of Sciences in Shenyang. The researchers were in the field studying wood-decaying fungi when they came across it, BBC says.

“We were not specifically looking for this fungus; we did not know the fungus can grow so huge,” Dai said.