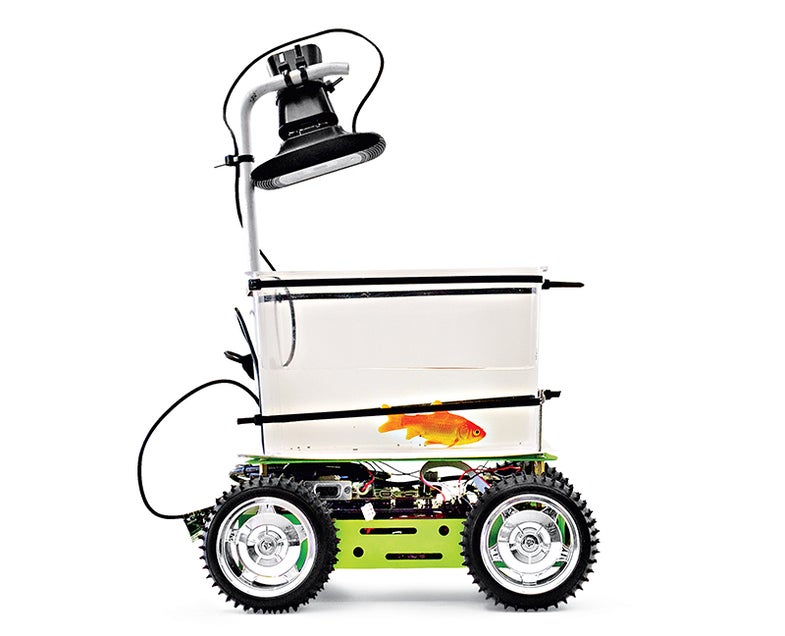 Goldfish can't walk on land. But this robotic tank, developed by design firm Studio diip, lets them roll in any direction they choose: When the fish moves to a different spot in the water, the tank changes direction to reflect its pilot's new position. Photograph by Studio diip
SHARE

If Thomas de Wolf gets his way, pet fish will soon navigate terra firma. A co-founder of Netherlands design firm Studio diip, de Wolf built a motorized tank that empowers goldfish to drive around. “We wanted to make something that showcases computer vision technology, but not in such an industrial way,” he says. “We thought, ‘Let’s do something for fish.’ ” De Wolf and fellow industrial designer Guust Hilte built a platform to hold a one-gallon tank and attached four DC motor–powered wheels, a miniature computer, and a battery pack. A webcam monitors the tank from above, and software analyzes the image feed to determine where the fish is. Then the program steers the tank relative to the fish’s location* (e.g., if it’s at the front of the tank, the tank moves forward). The fish-on-wheels may yet graduate from a laboratory one-off; de Wolf launched a crowdfunding campaign to try to bring a consumer-friendly device to market.

*De Wolf says no fish were harmed during the creation of his tank.

build it yourself
DIY
fish
July 2014