This Shark Has Two Heads

Look at this shark, it has more heads than sharks normally have (they usually have one head). 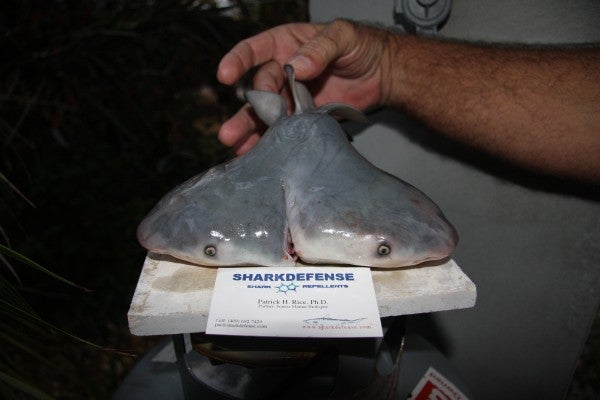 This is a shark fetus, with two heads. Sharks, according to Michael Wagner, MSU assistant professor of fisheries and wildlife, who confirmed the discovery, usually have only one head (I’m paraphrasing).

This is a bull shark fetus, a very common shark found throughout the warmer waters of the world. Bull sharks are among the most aggressive sharks on the planet; they can survive in brackish (part-freshwater) environments, were probably the inspiration for the movie Jaws, and apparently once mauled a horse in Australia. Which is to say, if you had to pick one shark species that’d be the scariest if it had two heads, it’d probably be a bull shark. I am not sure what kind of shark was the basis for the movie 2-Headed Shark Attack, starring Carmen Electra and Hulk Hogan’s daughter, but the bull shark would have been a good choice.

This particular shark had two distinct heads on a single body; dissection found that it had separate heads, hearts, and stomachs, but that the remainder of its body was that of a single shark. Yeah, dissected: the shark was found in the uterus of a mother bull shark caught in the Gulf of Mexico, and died shortly after it was cut out. It almost certainly would not have survived birth, had it been birthed naturally.

There’s no evidence that the two-headed shark is the result of pollution, even though it was found relatively soon after the Gulf oil spill. Abnormalities like this are not unheard of in nature, though this is the first two-headed shark ever found. The article was published in the Journal of Fish Biology.