Things We Can Learn From Dolphins: Electro-Sensing, Amazing Powers of Healing

When we figure out how to communicate with dolphins pretty soon, these are some good questions to ask: Why don’t... 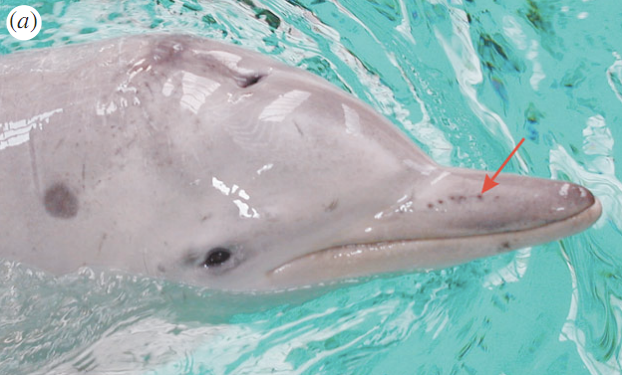 These are some of the latest impressive attributes we humans have learned about dolphins.

The animals can do much more than echolocate — they can sense the electric fields of other animals, according to a new study. This is mostly used to detect prey, although it might be useful for evading attacks. The Guiana dolphin has electro-whiskers in its rostrum, or dolphin nose, according to German researchers.

Researchers at the University of Rostock noticed physiological activity in the upper jaw of the dolphins, located in pores called vibrissal crypts. These pits are normally associated with whiskers, the scientists explain in a new research paper. They examined a dead dolphin and found a nerve structure that resembled electroreceptors in other species. Fish, some amphibians and duck-billed platypuses possess these structures, but no other mammals do, according to New Scientist.

To make sure this wasn’t just a vestigial anatomical structure left over from evolution, the researchers tested a 28-year-old male Guiana dolphin. They found the dolphin could detect a weak electric field, 4.6 microvolts per cm-1. Then they attached a plastic shell over his rostrum and tried it again, to find out whether covering up the vibrissal crypts would have any effect. He could not sense the electric fields, even at much higher intensities.

Electrosensing could help dolphins find prey at short distances, such as buried in sand, where echolocation wouldn’t be of much use, researcher Wolf Hanke tells New Scientist. The study also suggests that other animals, especially aquatic animals, might possess these electro-whiskers and can act as animal Conduits. The paper is published in the Proceedings of the Royal Society B. 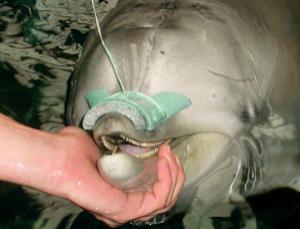 This is one of two amazing dolphin abilities that caught our eyes this week. Dolphins apparently possess amazing regenerative capabilities, which could inspire new anti-bacterial treatments and wound healing for humans.

NPR’s health blog talked to surgeon Michael Zasloff, who has discovered compounds in shark skin that can fight human diseases. Apparently dolphins can heal quickly and painlessly from shark bites, and they use stem cells to rebuild missing tissue. If a shark were to bite a chunk out of a dolphin, it would not hemorrhage or get infected, and apparently the dolphin would not even feel any pain, Zasloff said.

“Despite having sustained massive tissue injury, within about month the animal will restore its normal body contour. There’ll be some surface markings, but a chunk of tissue maybe the size of a football will have been restored with essentially no deformity,” he said. Check out the Shots blog for the full interview.

Dolphin blubber has special compounds that act as natural antibiotics, and it must contain stem cells that are able to construct a flesh patch, Zasloff said. He recently reviewed some amazing dolphin recovery stories in the _ Journal of Investigative Dermatology_.

Unlocking these secrets will require much more dolphin research, Zasloff said. And even more motivation to get dolphins using the iPad.