If A Fish Grows Up On Land, Will It Learn To Walk?

Flipping your fins actually does get you pretty far. 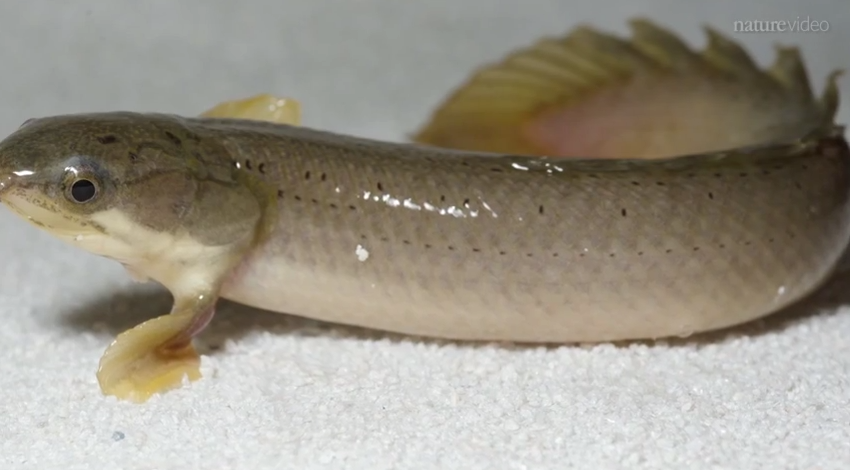 The old idiom about “being a fish out of water” just lost some of its luster. Researchers from McGill University in Canada successfully trained a group of fish to live on land and strut around.

The idea was to simulate what might have happened 400 million years ago, when the first group of ancient fish moved from water to land, eventually evolving into the amphibians, reptiles, birds and other animals roaming the Earth today. The researchers wanted to see if their land-dwelling fish looked and behaved similarly to the ancient fish, based on what has been learned about them from fossil records.

For their experiment, the research team raised 111 juvenile Polypterus senegalus – African fish also known as the “dinosaur eel” — on land. These fish already look a lot like the ancient fish that evolved millions of years ago, and they’re already capable of “walking” with their fins and breathing air. According to the Verge, their terrestrial environment had mesh flooring covered in pebbles, as well as 3 millimeters of water, so the fish didn’t dry out completely.

Video analysis of the fish showed that they did indeed change significantly from the water-dwelling control group; they learned to place their fins closer to their bodies, helping them to walk more effectively, and they lifted their heads higher than fish in an aquatic environment. Even their skeletons changed, becoming more elongated and forming stronger attachments across the chest (perhaps to increase walking support).

Many of these changes are similar to what has been inferred from fish fossil records, leading the researchers to “hypothesize that the behavioral changes we see also reflect what may have occurred when fossil fish first walked with their fins on land”, says Hans Larsson, a collaborator on the project at McGill. But are we sure teaching fish to walk is such a good idea? It’s time we all revisited The Creature from the Black Lagoon.

The researchers published their findings in the journal Nature.